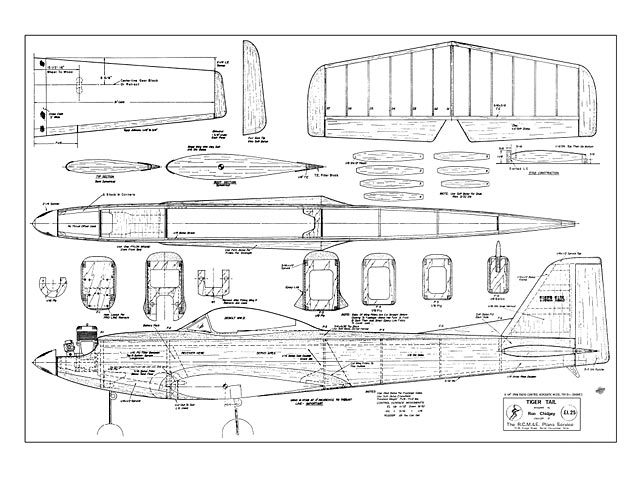 Quote: "Two time winner of the US Nationals can't be a bad record!

IN opening this discussion of the Tiger Tail, I guess I'm supposed to give you a sales pitch that will convince you to build one. I'm really not too sure if this is a good idea, since your flying will probably improve and us old folks don't need any of that! It gets tougher to win every year. And besides, Tiger Tail really has only two things of any importance going for it - it's ugly and it's honest! The 'ugly' part helps, since everyone knows ugly airplanes fly better, witness Kwik Fli (oz6526), Daddy Rabbit (oz5535), and Cutlass! One of my grammar school drop-out friends once remarked in a kidding session: It's ugly enough to be called a trainer. The only reply I could manage was: Pretty is as pretty does.

Which brings us to its most important attribute: 'Tiger Tail' is a completely honest airplane. Honest! I have built six of them over the past two years, one with fixed gear, and they have all flown almost identically, being completely predictable in their flying characteristics. I think this thing of 'honesty' or 'predictability' is the single most important factor a competition airplane can bring to the party. It far outweighs most other differences in design and styling. Needless to say, it is very disconcerting to have your airplane do something completely uncalled for in the middle of a heated contest.

If the quality of our flying has improved over the past four or five years, and I think it most certainly has, it is primarily due to:

Airplane design (or style) may have made a marginal contribution, but it is a secondary factor. There are several 'vintage' designs which, given the benefit of our really good radios and engines and modernized with retracts, could win today as easily as they did yesterday. In fact, I think we sometimes design ourselves into a built-in handicap in an effort to be different. I guess my philosophy has been to strive for good flying characteristics first and aesthetics second.

A good competitive design should certainly minimize the work the pilbt has to do. You will be surprised how good a conventional type like Tiger Tail begins to look after you have won a few first places with it. I know that last July, in Chicago, it was the most gorgeous airplane I had ever seen!

While Tiger Tail isn't a radically new design, it does have a few subtle differences worth mentioning. You will notice the airfoil progresses from a rather thick symmetrical centre section to a lifting (semi-symmetrical) tip section. I don't make any great claims for this combina-tion; however, Tiger Tail can be slowed down very nicely for landing without any fear of abrupt tip stalls, whereas many other designs with sharply tapered wings cannot. I don't know whether this is all due to the lifting tip, but I think it helps. The thick (17 per cent) centre section gives a good degree of air speed control. When you throttle back, the air-plane slows at a good rate, but oddly enough, the top end doesn't suffer. Tiger Tail was as fast as most at last year's US Nats.

The strip ailerons begin fairly far out-board for a good reason. The inboard portion of the strip is ineffective for generating rolling forces, but does con-tribute lots of drag when pushed out into the breeze. The outboard configuration improves the rolls by keeping speed up.

The fuselage shape is narrow and deep up front, as you might expect, but it also has a relatively wide tail cone, which may seem a bit odd. This was done to structurally stiffen the fuselage and provide a more rigid mount for the tail surfaces. If possible, I wanted to eliminate some of the flutter of the control surfaces caused by vibration. This flutter is transmitted through the pushrods and really works on the servo feed back pots.

Simplicity is the essence of good design and Tiger Tail's construction is simple and straightforward. If you must build one, let me carry you through the building sequence, almost step-by-step, since it may save you some time.

Construction: Cut foam cores from 1 lb foam. Be sure you cut a left and a right panel. Mark them immediately after cutting, because it is difficult to see the slight amount of lift in the-tip section. The sections shown on the plans..."

Note for a higher resolution scan (easier to read) of essentailly the same plan, see the Tiger Tail (oz11195) from Southern RC. 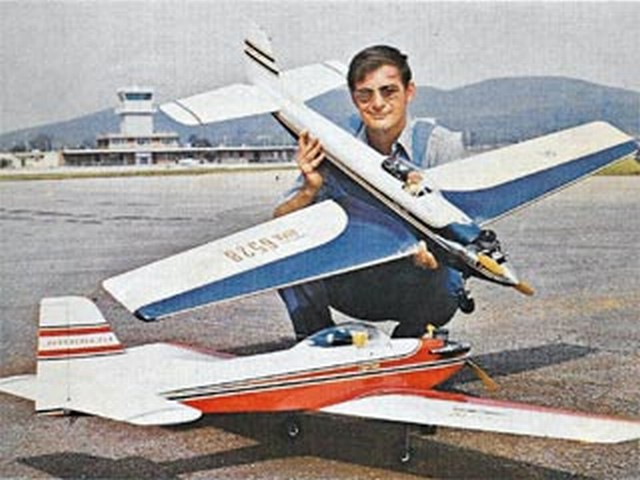