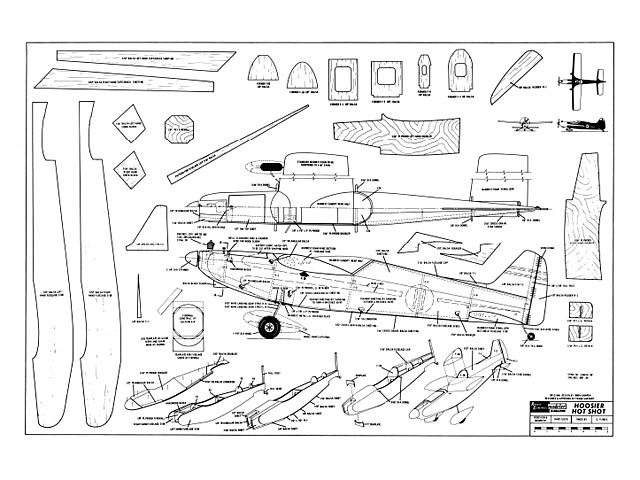 Quote: "The case for the compact racer - Those of you who are regular readers will recall the 'Getting Started in R/C' article in December 1966 RCM. This step by step program introduced you to the Whiz Kid (oz8493) and the Cessna 150 (oz8492), both of which utilized the Midwest molded foam wing. By now you should be semi-pros at guiding the tame ones and are, no doubt, itching to move onward and upward in R/C with something that offers more challenge and more fun. If so, hang on for the Hoosier Hotshot.

There is scarcely a modeler alive who has not been moved by the sleek lines and frisky performance of a Goodyear racer. Yet for many of us, the fun of building and flying in a simple competition event has been little more than a dream for a variety of reasons. Certainly lack of time, skill and money are among the foremost. The 'Hoosier Hotshot' is the first of three simple solutions to your problems. Designed around the readily available .049 size engines and using the molded foam Midwest wing, this mover is easy to build and a cinch to fly with a choice of tame and hot configurations. With the growing variety of single channel equipment to choose from - a multitude of mortgage free versions await you.

The .049 class Goodyear racer is a logical outgrowth of the interest created by the return of full scale racing throughout the country and the .40 engine sized R/C versions which have created coast to coast interest in recent years. The latter have provided a much needed shot in the arm to a somewhat jaded and pattern-weary sport, but of late have been the subject of criticism. Some of it seems justified. The author was one of many who witnessed the Goodyear exhibition races at the Chicago NATS last summer. As the guided missiles rounded the pylons at a variety of attitudes and altitudes (causing more than one flag man to hit the dirt) and then leveled out to hit speeds in the neighborhood of 100 mph plus on the straight-away, the strong personal reaction was to run for cover. Before the Friday night session was over, several expensive and beautifully finished models' remains were scattered around the area. To this chicken racing fan it did not add up to fun flying.

It is not the intent here to deny anyone their form of fun, but rather to extend the definition to include more of us jus plain folks. To each his own - live and let live and all that.

The Hotshot and his brothers would not have been born but for the gentle urging of Frank Garcher who whiled away many an hour of AT&T time with ye olde editore Donne in deeps discussions regarding small Goodyears. Big Frank confronted this designer with the problem over a cup of coffee one windy Wednesday last June. Demonstration flights of the Whiz Kid (oz8493) and Cessna 150 (oz8492) had been successful and the talk turned to .049 Goodyears. The situation was outlined and a decision made to utilize a cut down version of the regular 44 in foam wing. On the trip back to Madison with Frank Adams, the basic ideas began to shape up through a prolonged dialogue.

The following day rough drawings were sketched out - some calculated hunches based on several months of foam wing flying resulted in what seemed like a reasonable force arrangement and the balsa began to fly. The Hotshot was completed by Monday, test flown by Adams and ye timid author on Wednesday and placed in Garcher's hands at dusk the following day. His whoops of joy could be heard as far away as Chicago and before the day was over a decision was made to kit the Hot-shot. While this must establish some sort of record it is basically a confirmation of an old saying (which I just made up) to the effect that given wings, tail, motor and a framework to hold them together - something is bound to happen!

Be that as it may - some interesting facts were beginning to appear. First, on an .049 Golden Bee engine, the Hot-shot wasn't hot. Responsive, but not hot. Second, the clipped wing and the 26 oz plane had a power off glide that defied the rules - it just slowed down and eased in like a bird. On short grass, the wheel landings were a joy. The whole job was a novice's delight. One small question remained, like would it go like a racer? 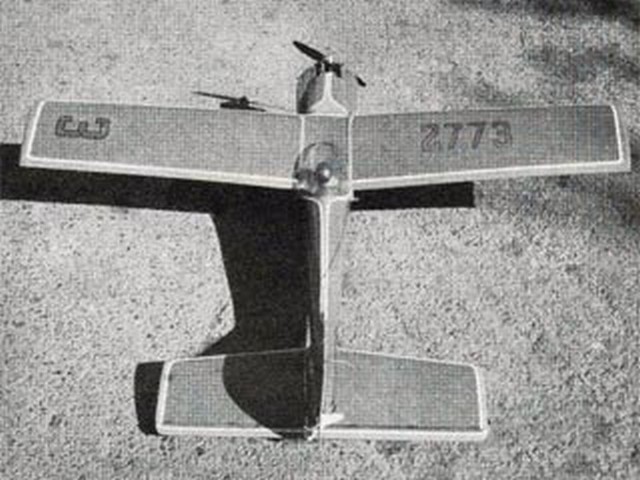