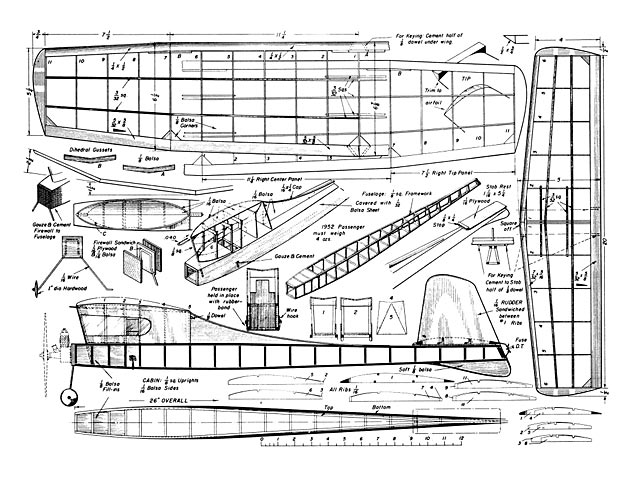 Quote: "Analysis of five outstanding payload designs which participated at the last National Contest in Dallas, Texas, produced this interesting pattern. Configurations studied consisted of those designed and flown by Lew Mahieu, Denny Davis, Wayne A. Schindler, Paul Gilliam and Frank Ehling - all noted contest flyers. The 'All-American' design resulting has been projected in somewhat larger size in a thoroughly tested model shown at left in photo form and at the right in detailed plans. Purpose of this presentation is to serve as a guide for original designing in the Pan American World Airways' 1952 PAA-Load events which again will be run off all over the country. These events will culminate in the big Nat's competition scheduled for Los Alamitos Naval Air Station in California which will be the site of the '52 American Champion-ships during late July, Pan-Am is offering cash and watch awards this year.

When five men work independently on the same design problem, normally we could expect five different results as each man will design according to his experience and local flying conditions. And if we were to look at the Pan American FAA-Load entries on the flying line we would say that the above statement is true. However, when these ,same models are drawn to a common scale and superimposed one on another we wonder if there is so much of a difference between them.

To illustrate the above point, we took five payload models, by different designers who specialize in the field, and superimposed their outlines as shown on the drawing. What would you say to their respective differences? It would seem that the five men came pretty close to the basic design.

Lew Mahieu's model was not specifically designed for payload. He also uses it, with success, for free flight. By having a long nose he was able to locate the CG so that it would not change if the passenger is removed or added. On the 'composite' outline we minimized this feature as it would have undue influence on the average.

The side views of the models varied considerably, especially the rudder areas. Compare Mahieu with Ehling on a similar moment arm. The fact that both models perform well, despite their difference in rudder areas, makes one wonder just how much tolerance one can have and still be safe. But, as most of us know, the design differences will cause different flight patterns, although in the end the duration may be identical. So on many occasions it may be the type of flight that may determine the actual layout of the design.

The main purpose of this comparison was to show the variations that can be had with one formula. And this may also be a good place to re-mind you that a winning model is not necessarily the ideal design to follow implicitly. Frequently a model may win because of local circumstances..."

Article pages, thanks to Netmagick. 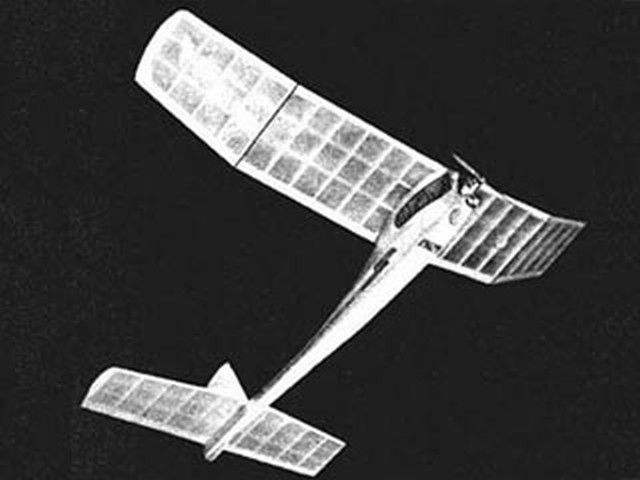