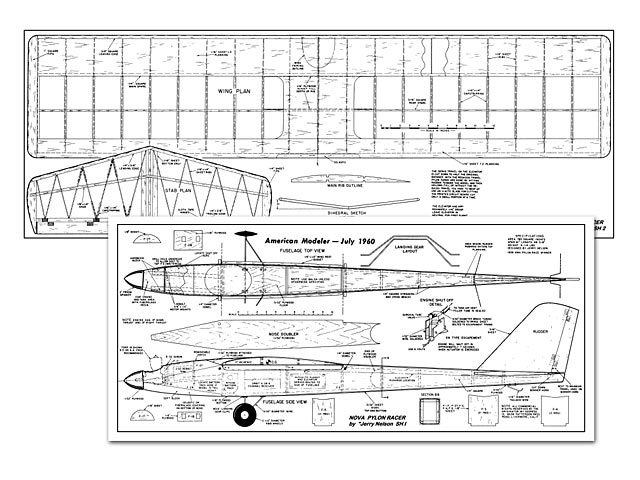 Quote: "The Nova design which Bill Deans and I flew to first and second place (respectively) in AMA pylon at the last Nationals is based on the aircraft I entered in the '57 Nats. The original has since gone thru several changes; the final configuration is presented here.

Nova placed first in every major AMA pylon event entered in the West Coast as of the time this was written and holds the AMA record for pylon. The record was first set by Bill Deans at the '59 Nationals, later by myself at the FAST club pylon record trials held last November. The record was 44.28 mph. Nova also racked up a West Coast record for open pylon with a speed of 44.5 mph.

Nova is a very functional design without any frills or complex construction features. The fuselage height and width were determined by the size of the Orbit 8 receiver and the Bonner Duramite servos. Since Nova will do about 70 mph on the straight-away, stream-lining becomes very important. The engine is cowled in partially and the nose is faired into a 2 in spinner. The stabilizer is glued to the fuselage to eliminate drag from hold-down dowels. The landing gear is 3/32 wire. The gear isn't too sturdy, but this ship wasn't designed to do touch-and-go landings. The only extra drag-producing items are the push rods and control horns, and the wing hold-down dowels. The latter are external for ease of assembly and to let the wing knock-off in a rough landing. The dowels could be installed inside the fuselage.

The wing section is 7% thick, flat bottom, with the maximum camber position at 40%. There are two reasons for the choice of the flat bottom section. The first is for ease of construction. The second stems from a theory of mine. I believe that the curvature of a very thin airfoil section as used in model aerodynamics is not very critical. So instead of a hard-to-build semi-symmetrical section, why not a simple flat bottom section? The results seem to prove my theory.

Nova incorporates a very large fin for good directional stability - very beneficial for pylon racing. The rudder action is just like an aileron action. When the rudder is applied the ship will bank and then turn. To do a pylon turn you bank the ship with the rudder just as if you had ailerons, and then give 'up' elevator to turn the ship around. More on flying later.

The elevator is very small with little movement because of the ship's zero-zero decalage and high speed. The stabilizer is quite large to provide excessive longitudinal stability for an airplane that will fly 'in the groove.'

An engine speed control is not used. An engine cut-off is employed instead. There are several reasons for selecting the shut-off control. The actuator can be very light in weight. An engine using hot fuel doesn't run in low-speed very well. A throttle usually reduces the high speed of the engine. The ship probably wouldn't settle very good on low-speed because of its clean design and light weight. The shut-off is built from an old escapement. Detail drawing shows its basic construction. When the shut-off is operated, the air supply to the tank is cut off and the engine will take about 7 seconds to quit. The advantage of this type of shut-off is that you cannot kill the engine by mistake. You must hold the control for an extended period.

There are a few comments regarding trimming and flying the Nova which I feel are important. Adjust the ship so that under full power it will fly level or have just a very slight climb. Put down-trim in the elevator to kill the climb. A Nova built according to the plan will usually require about 1/16 down-trim in the
elevator. There is an optimum position for the up elevator limit..." 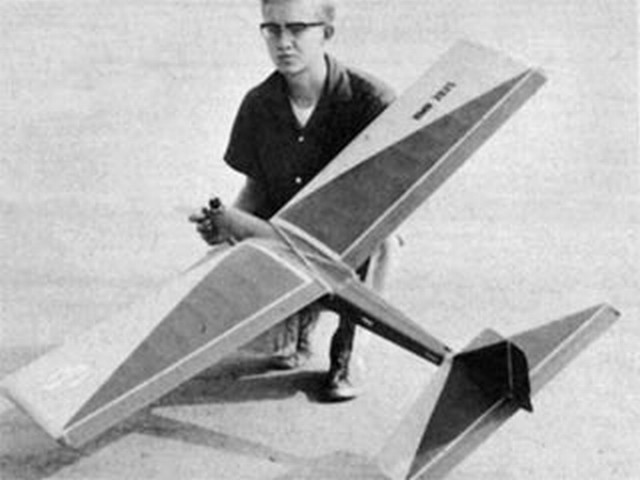