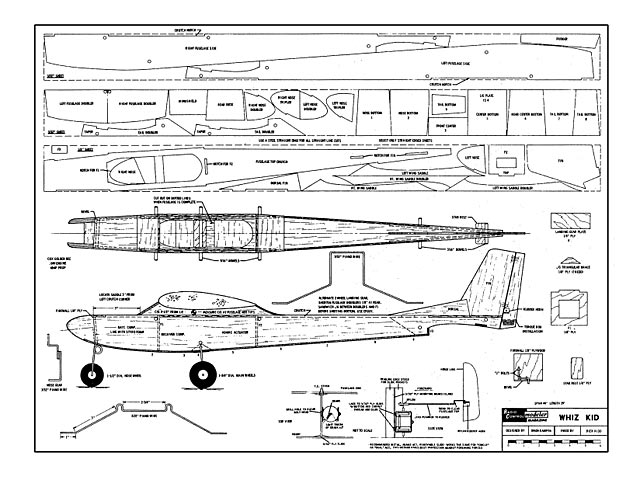 The Whiz Kid and the Cessna 150 (oz8492) designs by Owen Kampen featured together in the one RCM article "Getting Started in R/C. A Step by Step Program for Beginners" in RCM, December 1966.

Quote: "In almost every sport or hobby it is customary to start at the beginning. I say 'almost' for radio control remains a stubborn exception! Here, the compulsive urge to begin at the top has been, and is, one of the greatest barriers to enjoying the rewards of R/C flying.

A large part of this is due to adult ego which causes many otherwise intelligent grown-ups to shy away from anything labeled 'for beginners', even though they have never built or flown anything more complex than a 10c glider. They soon learn, to their dismay, that age and money are no substitutes for experience, but by then it's too late and they are soon pursuing a new lifetime hobby of the month.

On the other hand, there are large numbers of would-be builders and flyers of all ages hanging on the fringe who are itching to get into 'wireless control' but are held off by the confusing jargon, double talk, and conflicting advice volunteered from all directions. They are perfectly willing to start moderately with minimum controls, minimum building time, and minimum investment, but aren't quite sure just where and how to begin.

If this latter description fits you, hang on for some straight words on the subject. And you old timers - don't go away, because there's something here for you, too - unless you're hooked on status symbols - in which case you'll have to seek success elsewhere. Now, let's get the proverbial show on the road with some specifics.

The Whiz Kid and Cessna 150 (oz8492) introduce a new approach to 1/2A R/C models. Each is designed to fit a specific step in a building program guaranteed to set you off to a flying start in single channel RC. Both feature an unusual moulded foam wing and stab which combine to give a flight response unique in .049 class models. Thoroughly tested in hundreds of flights by modellers of all ages and degrees of experience, they have proven to be exceptionally easy to build and fly, yet have survival rates far beyond the average.

While they lend themselves to the 'trainer' category, it would be unfair to label them exclusively as such, for many advanced multi modelers have enjoyed the sheer 'fun of flying simple' with this progressive pair. Let's take a look at them, individually, and learn the secret of their success as well as how they can be modified to grow with you as your flying skill increases.

Through the years many models have appeared offering themselves as the answer to a beginner's prayer. As a whole they have been:

All too often the net result has been that the 'first' model has had the effect of a revolving door in terms of getting new people in and out of our R/C hobby in record time.

The Whiz Kid has been desired to welcome you to the group and keep you here coming back for more. Big words? You bet! Let's see how it's all accomplished and you can judge for yourself.

First there's the matter of the curved slab that keeps the whole business air-borne - the wing. Note: All wings are not alike. Obvious? Well not so much as you might believe. If you are new to building and covering them, they are all alike - difficult!

We solve that in a hurry by using Midwest's new molded foam wing that eliminates building and covering. It also does a lot more than save time - it prevents warps, one of the most haunting voodoos to ever plague flying machines! The foam wing and stab do not need to be covered - more on that later - yet they are strong through extra thickness and flexibility. 'Thickness' is a key word in describing the flight characteris-tics of this pussy cat so let's pause a moment to see how and why it is important. This is not the time and place for an involved discussion on airfoils so we will keep it simple:

In other words, lift and drag walk hand in hand and you can't have one without the other. The use of thick airfoils is not new - being used by most large multi ships to-day. The common practice is simply to overpower them with large engines. The Whiz Kid doesn't try to fight this combination but puts it to work with the following results. The thick 17% section gives high lift and high drag to keep flying speeds down. Reduced speed means more time to anticipate the action of the model and to give the proper control. It also results in a slow lazy glide from altitude after the engine quits to help you learn to set up proper landing patterns and get extra flying time from small engine tanks..."

The Whiz Kid is Owen's predecessor of the RCM Ace Whizard , but used a molded foam wing and stabilizer set that was made by Midwest Manufacturing. I think Midwest produced a kit of this plane for a time. Not 100% positive of that, but I know they made a couple of .049 size aircraft using that wing and tail.
dfritzke - 15/03/2017
Add a comment