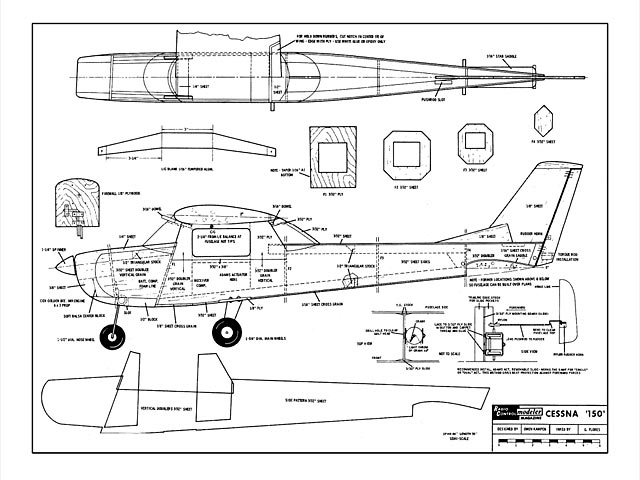 The Whiz Kid (oz8493) and the Cessna 150 designs by Owen Kampen featured together in the one RCM article "Getting Started in R/C. A Step by Step Program for Beginners" in RCM, December 1966.

Quote: "Models of full scale airplanes have al-ways been the mainstay of our hobby, and while most do offer special problems for the modeler - both in building and flying, the '150' is a delightful exception! The clean, simple lines and excellent stability are made to order for us and this single channel version retains all of the fine flying characteristics of its 'Big Daddy. As the big one is breaking all sales records for light planes, with the majority being used as trainers for student pilots, what better choice for Step 2 in an R/C building program?

The '150' is considerably faster and more responsive than the Whiz Kid (oz8493), yet tame enough to allow you to easily make the transition. Properly trimmed it will fly hands off, and if you enjoy cross country running, don't bother with R/C! In the air, it's a joy to see as well as to fly, and the see-through windows give that extra touch of realism that makes it hard to distinguish from the real thing. As with the Whiz Kid, the major factor affecting performance is the thick semi-symmetrical airfoil of the foam wing. Now coupled with a heavier, faster plane, the results are surprising in terms of increased penetration plus the same gentle stall recovery and flat glide.

Added maneuverability is a direct result of the larger and taller rudder which, in turn, needs more power to move it. Here the Adams Dual Actuator comes into its own, giving true proportional control with plenty of bang when needed. The same battery pack can be used, 3 pencells or 4 - 500 mah nicads with 3.6V tapped to the RCVR. The difference lies in the fact that the Dual puts out 3 times the torque of the Single at about the same voltage and current drain. As a result, response is immediate and positive.

Go easy to start with and set the push-rod in the outside hole of the rudder horn for less rudder throw. When full left or right is given the 150 will go into a steep bank and if the turn is held, will spiral dive rapidly and steeply. While a bit unsettling for the newcomer, this is the method for picking up excess speed to convert into rolls and loops.

A great deal can be done on rudder-only when mastered. The 150 also lends itself to conversion with the installation of a Galloping Ghost actuator such as the Rand LR-3 which will give elevator control for more advanced maneuvers.

Actually, the elevator serves a func-tion even in unadvanced maneuvers. The obvious loops, elevator turns, and flare out landings are part of the package but another application sometimes goes unnoticed in the excitement. Like what? Well, like simple straight and level flight. A rudder only model without motor control tends to climb under power until turned. With elevator control - even elevator trim - straight and level flight is possible, turning engine thrust into forward speed which in turn makes it easier to perform many stunts.." 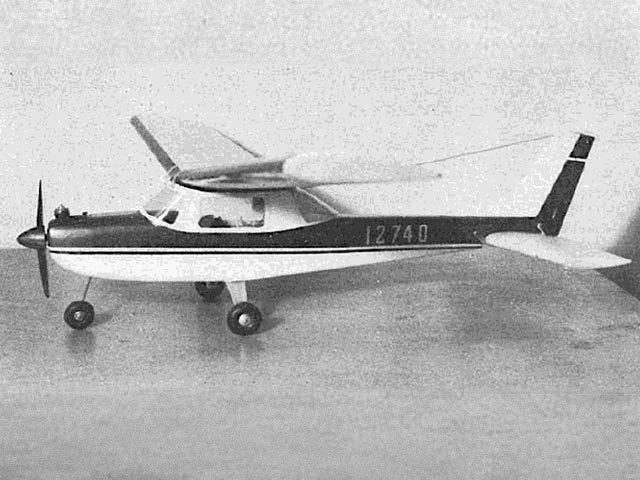