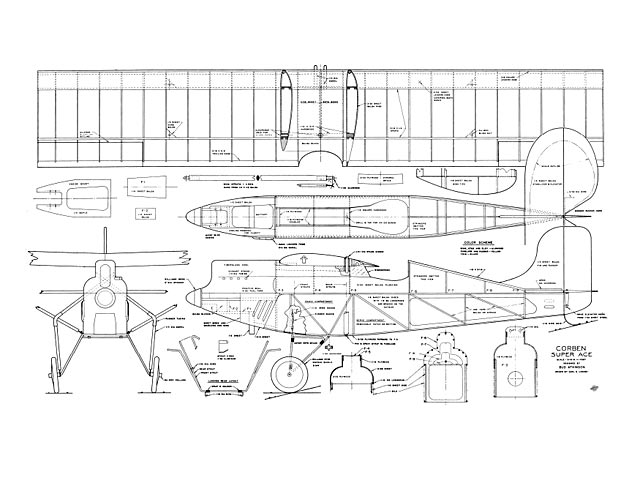 Quote: "One scale model that is a relaxing, stable, and realistic flyer. Designed for REM controls, it is simple to build. Power is a McCoy .35 RC. Corben Super Ace, by Bud Atkinson.

Those of you who have lived in the so-called Golden Age of Aviation, the late 20's and 30's, do you remember 1934? That was quite a few years, and also a few model airplanes, back! That was the year the great depression really began to be felt - the year of the Century of Progress, or World's Fair, in Chicago; the year that a screaming maniac was telling the rest of the world of the so-called master race.

The great airplane of all times, the DC-3 was still only on the drawing board, even the simple little J-3 was not yet airborne. The Model T and Model A Fords were commonplace. Maxwell Bassett came to the Philadelphia Nats., with of all things, a miniature gasoline engine in a 4 ft span airplane. And in that year a young man named OG Corben was designing and building airplanes in Wisconsin - a small home-built type design - and in those days they were really home-built.

You didn't run down to your local airport and buy anything you needed to build a flying machine. Even the engine had to be handmade, as there were no light and small engines as today, and if there had been, most home builders didn't have the green in 1934! Corben's mainstay was three small airplanes of about 25 ft wing span. One was the Corben Junior Ace. It was a cabin job resembling the later Porterfield or Rearwin Sportster of the late 30's and early 40's. The next was the Corben Baby Ace, which was destined to become one of the all-time favorites with the home builders, and no doubt more are being built today than before WWII. This little ship used a variety of engines, mostly imports. The third airplane was a beautiful little bird with racy looking lines, the romance of the open cockpit. Resembling a fighter plane of the day, it was the Corben Super Ace, powered by, of all things, an automobile engine, and a Model A Ford engine at that.

The Baby Ace and the Super Ace both used the same wing and stabilizer layout, as well as the landing gear, but the fuselage were entirely different. With the coming of the model airplane engine in the late 30's, the modelers fell in love with the Super Ace. Many of the old model kit manufacturers had models of the Super Ace, from 10-cent dime store rubber models (which the author cut his teeth on) to the big six ft gas free-flight models.

The magazines of the 30's also had plans on the Super Ace. It is ironic how the models of the Super Ace were so successful and well accepted, but the full-scale Super Ace did not enjoy the same success. A Super Ace ready to fly could be had for as little as $895 delivered, but in those days $895 was a lot of money. You could also buy the Super Ace in kit form for around $500 to $600 - still a lot of money. Building an airplane was much more difficult in those days, as almost everything had to be improvised or handmade.

The next stumbling block was the water-cooled engine, a converted Model A Ford engine. Corben replaced the pan with an aluminum one, a new front crankshaft bearing to hold the shaft extension for the prop; also an aluminum head to cut down weight. You could purchase a rebuilt Model A engine for $395. The A engine developed about 55-hp. It also developed vibration and, at times, had heat problems, as it did in other home-builts of the early 30's. The Super Ace had performance, but was soon to be forgotten as the Piper Cubs, Taylorcrafts, Porterfields and Aeronca's were to be mass produced with the coming of better air-cooled engines.

In the model world, the Corben Super Ace is still one of the all-time greats of the Golden Age of Aviation. So this is a tribute to Mr OG Corben and his contribution to private pleasure flying.

Construction: The construction of the Super Ace is simple and uses common scale-model practice. I made a fiberglass cowling, but it is large enough to build of balsa wood, if preferred. However, a glass cowling has many advantages and is comparatively easy to build. The McCoy .35 is more than enough power and fits the Super Ace cowling very well. I believe, if you keep your Ace light, even a good .19 would fly it OK. My Super Ace weighed 4-1/4 lb ready to fly, using the Kraft KP-4.

The landing gear struts are of 1/4 in dowel and should be epoxied in the upper part of fuse. The knee of the struts should be of flexible material so as to give when the landing gear flexes on hard landings. I used a small length of rubber tubing; the lower strut attached to main gear by means of drilling a hole in a metal tab, then slipped over axle before wheel is installed. The tab is epoxied to 1/4 dowel strut. The Super Ace had a tailskid-no wheel. I epoxied a 1/16 wire skid to rudder and used stitching on lower part of rudder. The Ace steers very well considering it uses a wire skid; also I have had very little trouble with the Ace tracking on takeoff. I was rather surprised at how well it did track considering the landing wheels are fairly close together..." 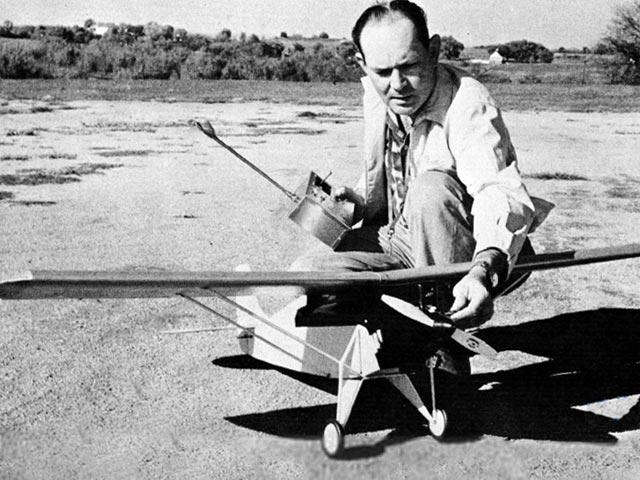