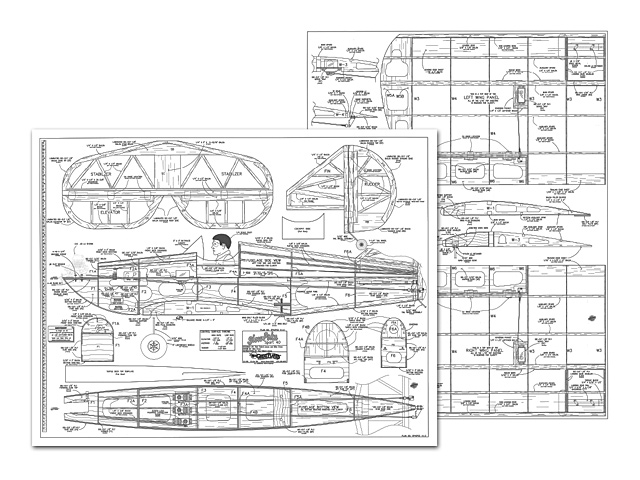 Since its introduction, the original SlowPoke has been successfully built and flown by modelers all over the world. Now, the SlowPoke Sport 40 builds upon this tradition but adds the dimension of larger size and ailerons for aerobatic enjoyment.

The SlowPoke Sport 40 incorporates several improvements, such as a redesigned wing for proportionately greater area and faster assembly and independent servo controlled barn door ailerons for simple installation and precise operation. The SlowPoke also has a redesigned fuselage for optimum placement of radio components for better balance and fewer blocks for less carving. The end result is an excellent sport model that can be flown as fun-fly stunter or as a docile Sunday flyer that will land at walking speed or fly backwards in a breeze.

FEATURES: Easy-To-Build, with CAD-Engineered, Precisely Interlocking Construction Allows the Slow Poke to be Ready-To-Cover in Only A Single Weekend.

Quote: "hi, I was looking for this plan for along time, I put a post on RCGroups and very kind man sent them to me. So I got them scanned and thought i would share them. thanks for a great site cheers, flying hobbit :)"

Quote: "Hello, I saw the post about the lack of the formers for the Slowpoke 40. After looking at the manual I noticed that the drawings in the manual are vector PDFs, so I did a quick CAD conversion... full size PDF and a DXF for the DieCut parts. Hope it helps. Regards, Alan"

Quote: "Slow Poke 40. Review by Ron Farkas. Is bigger better? The author provides the answer with his look at the upsized version of the original .20 size.

The Great Planes Slow Poke Sport 40 is a friendly airplane to own and fly. It is distinctive in appearance, sort of a cross between a vintage era racer and a homebuilt. It gets attention at the flying field, both on the ground and in the air. It has a large wing, with lots of area and a high-lift, flat-bottomed airfoil. It loves to fly at a leisurely pace. The large wing makes it a bit lazy at rolling maneuvers, while the short fuselage makes it a bit lively at pitching maneuvers. It is different from the current crop of boxy-fuselage and straight wing sport models, and that accounts for its charm.

This model has a pretty common 61-1/2 inch wingspan but a long 17-inch chord for a grand total of 1076 square inches of area. The fuselage is only 49 inches, so the tail moment appears to be rather short. The finished weight is 6.5 pounds, giving just a 14 ounces per square foot wing loading. Being a rather slow flyer, it does not take a mighty powerhouse of an engine to get the desired results. It is rated for a .32 - .46 two-stroke or .40 - .52 four-stroke engine. The review model uses a Magnum .52 which is more than ample, and its character really complements the model.

The first generation Slow Poke was smaller, for about a .15 to .25 displacement engine. It must have been popular, because Great Planes did not wait very long before introducing this .40 size version. I joke about this one being the adult size Slow Poke. Even with the wing removed, it fills up the luggage space of my hatchback car, but I have not given in to the SUV craze yet. The smaller Slow Poke used just three channels for control; however the Slow Poke 40 model adds barn-door style ailerons, with a separate servo in each wing.

Kit contents: This project was constructed from a full kit; it's not a pre-built model. The materials are traditional balsa wood and light plywood parts plus balsa sheet stock and both balsa and bass-wood strips. I can remember back when lite ply was first introduced as a substitute for balsa fuselage sides, but it is standard now. The forward fuselage sides and formers were on 1/8-inch lite-ply sheets, and dihedral braces on 1/16-inch aircraft ply. The wing ribs, wing tips, aileron bases, and curved tail parts were located on die-cut bal-sa sheets. The die-cutting was excellent, and the parts separated cleanly from their sheets. However, for the most part, the die-cut balsa and strip stock were much harder and heavier than necessary. By contrast, the balsa sheet provided for wing and fuselage sheeting was a bit too soft and delicate.

The hardware package was extensive, containing pre-formed main and tail landing gear legs, control horns, clevises, and as-sorted nuts and bolts. The pushrods were steel wire running in plastic sheathes. A blank of heavy gauge celluloid was provided for the classic windscreen. Some Slow Poke decals were included. Great Planes provided top quality computer drawn plans and an illustrated 28-page construction manual. This manual contained diagrams of all the die-cut sheets for parts identification, and a centerfold of reduced size plans for quick reference.

Construction: The engineering of the structure and the building process were very well executed, and the parts fit was excellent. Three grades of Great Planes Pro CA glue were used for assembly, plus some of their 30-minute epoxy on the wing joiners.

Construction started with the tail surfaces: rudder, fin, stabilizer, and elevators. The rounded outlines were obtained by com-bining die-cut curved pieces with straight strips. Each of the curved pieces must be prepared by laminating duplicate 1/8-inch parts to make 1/4-inch thick pieces..." 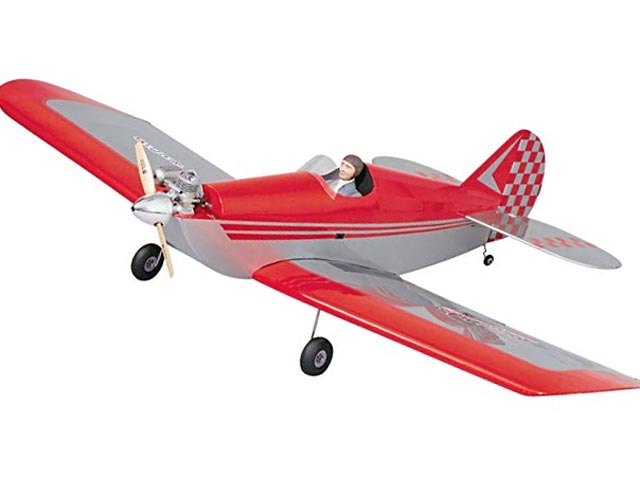 I had this in my files for the Great Planes Slow Poke 40 [more pics 003]. Please note that this is not an exact copy of the kit box artwork. I've cleaned up an old label photo that had some wear and tear.
JeffGreen_LasVegas - 28/06/2018
Are there any outlines for formers F2, F3, F5 and wing W2? I was also looking for any dihedral details. I may have missed all the above. Thanks
Alan - 23/03/2019
Hi Alan, this plan and instructions are from a Great Planes pre-cut kit, and so the plan doesn't have to show all the formers - as they are already cut-out. The dimensions of the missing ones can be derived from the fuselage top and side views, and the sketches of the parts in the instructions. The dihedral braces are in these sketches, as well. With a bit of detective work most of missing info can be determined - even the undercarriage leg shapes! It looks like a good model.
VinceDay - 23/03/2019
Please find attached three photos of my Slow Poke Sport 40 which I dressed with wing fillets, modified nose and Gee Bee style wheel covers [more pics 005-007]. Covered with Super Coverite with a dope finish. This did add some weight, not sure how much but I can still lift it. Powered by an OS46AX for the first few flights. I later put in an ancient Como 51 which brought the model to life. Flying shot courtesy of Peter Foster. Lots of fun and a very broad speed range.
MikeFoster - 03/04/2019
Cannot open the DXF files. Downloaded the current viewer. What am I doing wrong?
Richard - 29/11/2020
Opens fine for me. I'm using QCAD (free) to open and view DXF files. Issue is at your end, I guess. Try a different viewer app?
SteveWMD - 29/11/2020
No problem reading it on this side either, I suggest you try other DXF readers. If everything fails we can try something else as I'm sure the file is ok.
Miguel - 29/11/2020
Try Librecad (it's free)
https://librecad.org/
Daithi - 01/12/2020
Add a comment