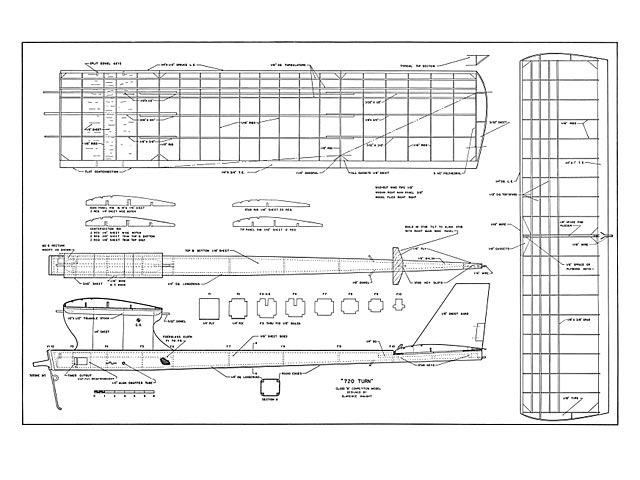 Many years ago when I was learning to fly in a J-3 Cub, my instructor had me practicing 720 degree turns by the hour. The maneuver was judged to be good if we hit our own slipstream the second time around indicating that altitude had been held constant. I've never forgotten those 720 turns, but it is coin-cidental that this ship happened to turn out with 720 sq in of wing area and is trimmed for a two turn or 720 degree power pattern. There is, however, no danger of encountering its own slipstream on the second turn as there will be a considerable difference in altitude at that point in the flight.

I'm certainly not going to claim this ship is the ultimate in competition power models. If I thought that the ultimate design were possible I would quit today. For me, Free Flight is truly the greatest of all model flying, unlimited in challenge, development, and best of all, pure enjoyment. May it live forever!

The 720 turn happens to be my best design effort at this time. I have incorporated the features I believe to be the most compatible for a compromise situation - that of a fast, high climb and a floating glide. Either of the above-mentioned characteristics are easily attained but when efforts are made to combine them it is a compromise at best.

For the climb portion of the flight to gain that all-precious altitude for a better chance at the elusive thermal, I have relied upon a thin, flat bottom airfoil, It's sort of a 'draw around your shoe sole' airfoil of questionable ancestry but it works on this design. It was kept under 10% in thickness in hopes of reducing drag without sacrificing lift. Another drag reduction measure is the use of minimal frontal area.

Keeping the structure as light as possible, yet with sufficient strength, contributes to overall climb and glide performance.

Probably one of the most important climb influencing factors is the power plant. The original ship utilizes an Enya 29 setup with the high compression head and the No 3 venturi insert running on a pressure fuel system with high nitro fuel. 9x4, 10x3-1/2 and 10x4 props have been used with good results. (Start with the 10x4 and work back to the 9x4 as the ship is more docile on a 10x4.) A competitive free flight must have a 'going' engine..." 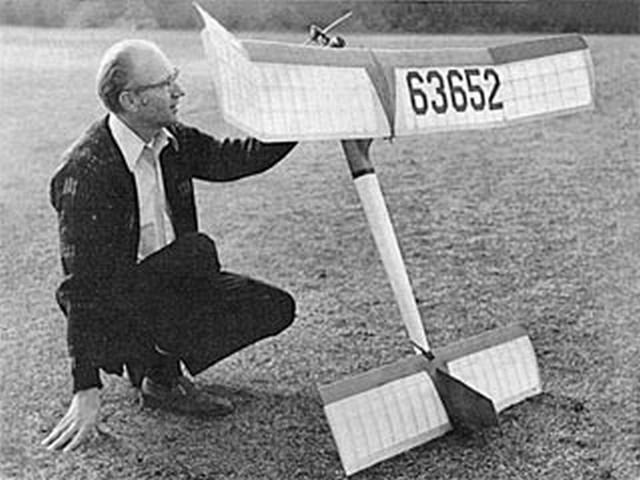