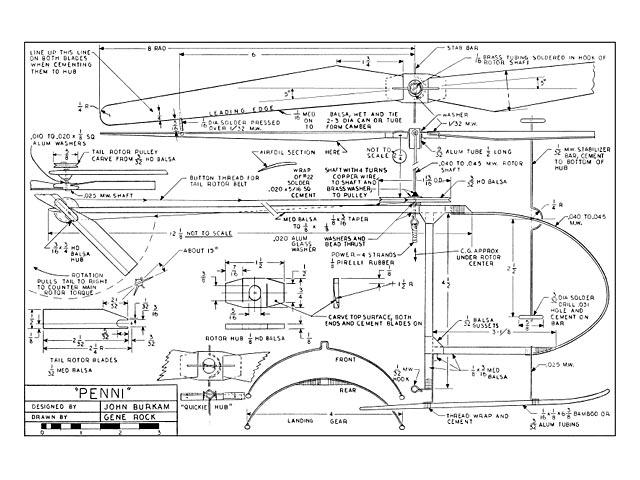 Many men came to me after I flew Penni in the auditorium at the DC/RC Symposium last May and quoted their sons as saying - Daddy, make me one of those, please! It is rather cute flying around like a real chopper and it's fairly easy to make - especially if you use the 'quickie' hubs instead of the universal hub. Most of you can build it from the plans only, referring to the text in case it doesn't fly right away.

This little model was designed during my lunch periods at work and mostly built there, too. She was made specifically as a stability or instability demonstrator for the DC/RC Symposium in May 1969. Big enough to have decent performance, but not big enough to be damaged when colliding with tables, lamps, etc.

If you build the universal hub you can press in balsa plugs or wedges to prevent tilting of the aluminum tub with respect to the shaft and/or the hub. You can demonstrate the stability of the completely free universal hub with stabilizer bar and of the feathering-only hub with stabilizer bar. (Feathering is pitch changing of both blades, one up, one down, about the hinge axis which is nearly parallel to the blades.) You can also demonstrate instability of a com-pletely rigid rotor; that is, no feathering or teetering, and of a teetering-only rotor.

If you don't want to experiment you can just build the 'quickie' hub shown and have a model that flies just as well as or better than the universal hub. You'll notice that on the quickie hub the blades can feather easily by twisting the feathering pin in the diamond eye, but when the rubber is wound up and driving the rotor, the force of the eye on the feathering pin creates friction to resist any up and down sliding of the pin in the eye, as would be caused by flapping or teetering motion of the blades. This friction damping of flapping motion prevents the fuselage from swinging to and fro like the one with the universal joint.

Fuselage: You can start building any part, but I like to start with the fuselage (sticks) and add the landing gear so it can stand up by itself. You can add parts to that and not have them lying around loose, or lost. Cut the 1/8 x 3/16 pieces to length and shape the ends as shown on the drawing, taper the tail boom, and sand off rough edges. Mark on the balsa where they come together, then cement them together at right angles to each other..." 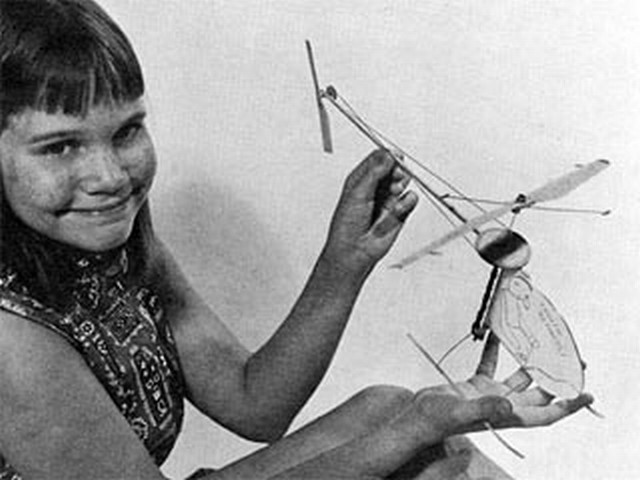 Penni Helicopter [more pics 004-007]. Built in 1970 from American Aircraft Modeler plans. For some reason I didn't try to modify anything and it flew right off the table (board) with no trimming needed. I wouldn't have known what to do if it had not flown. Motor is very short, lube and pack in the winds as it doesn't fly very long. I left the model unfinished and the pictures are of a flying session sometime in the '90s, no warps.
JeffBreece - 03/08/2018
Add a comment