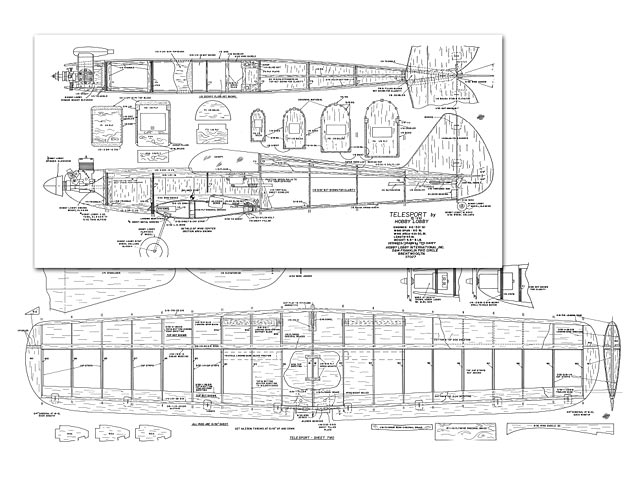 The Telesport was designed by Ted Davey for Hobby Lobby International. It's a low-wing sport model capable of outstanding aerobat ic performance in the hands of any moderately capable pilot, yet is actually easy enough to fly that it could be used as a secondary trainer. The design is quite simple and easy to build. The full-size plans and instruc-tions are well thought out and should present no problems for anyone with previous build-ing experience.

The Telesport's lines are similar to some of the homebuilts of the '30s. If you wanted to, you could cut the canopy to create a windscreen, add a pilot, and cover it in a scale color scheme complete with N numbers to produce a semi-scale look. Not only would you have a great looking model, you'd also have one capable of some real barnstorming performance.

THE KIT: All parts come bagged or rubber banded together. The canopy is wrapped with tis-sue. The full-size plan sheets are rolled and there is an illustrated instruction sheet with a complete parts list. The wood quality in my kit was average, and the die-cut parts were easily removed from the sheets. Parts fit for the most part was pretty good (more on this later).

CONSTRUCTION: The wing is of standard D-tube construc-tion which results in a very strong and stiff structure. All of the ribs have building tabs at each end, which allow the wing, to be built on a flat building board without the need fora wing jig. The left and right panels are both framed up and permanently joined prior to adding the sheeting.

Before sheeting, make sure the ribs have a smooth taper from the root to the tip. As stated earlier, the parts fit was pretty good, but the wing ribs were off just enough that there surely would have been some waviness in the finished wing if not corrected. This was easily accomplished using a 36-inch aluminum T-bar with sticky-backed sandpaper, which was laid on the root and tip ribs and the ribs in between sanded as needed.

Be sure to use plenty of epoxy when gluing the hardwood landing gear blocks into the notched ribs, as there is no additional bracing in this area other than a doubled rib section. This is not meant to imply that the area is weak, as the ribs are all 3/32 balsa, as is the wing sheeting. The blocks protrude beyond the ribs so that they are flush with the outside of the lower wing sheeting. There are no specific instructions as to how the area around the gear blocks should be sheeted, and most modelers will probably opt to do it in sections. I took a bit of extra time and made a cut-out in the sheeting to fit exactly around the gear blocks. This was slow work, but the payoff was a finished wing devoid of splices in the sheeting.

The ailerons are of the strip type and only require double-beveling the leading edge, rounding the tips to follow the wing contour, and drilling holes for the torque rods. The torque rods do not have hinge bearings at their root and therefore it is important that a hinge be placed right at the root of the aileron to help support them.

The fuselage is simple to build and goes together very quickly. The entire front of the fuselage from the firewall to the rear of the wing opening is doubled, and the rear section gets stringers all the way back to the rudder post. The area below the stab mount is also doubled for strength.

One point I didn't really like is that the fuel tank is built permanently into its compartment (as opposed to being inserted through the wing opening) with no access. If it ever becomes necessary to work on the tank at a later date, it will require cutt ing the fuselage open.

The two plywood blocks for the wing trailing edge bolts are glued into notches in the fuselage wing saddle area and are further backed up with pieces of hardwood. After drilling the wing and blocks, you are supposed to seat the supplied 1/4-20 blind nuts into the hardwood, but when l did this the hardwood pieces split and the blind nuts never did become secure. I knocked out the blind nuts, filled the holes with micro balloons and epoxy, added additional wood behind the hold-down blocks..." 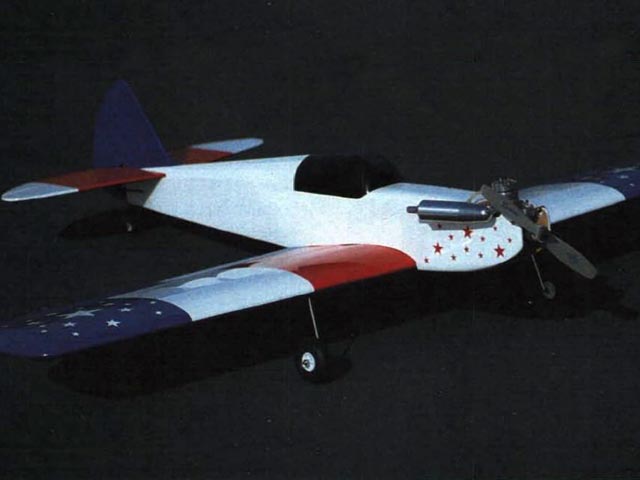