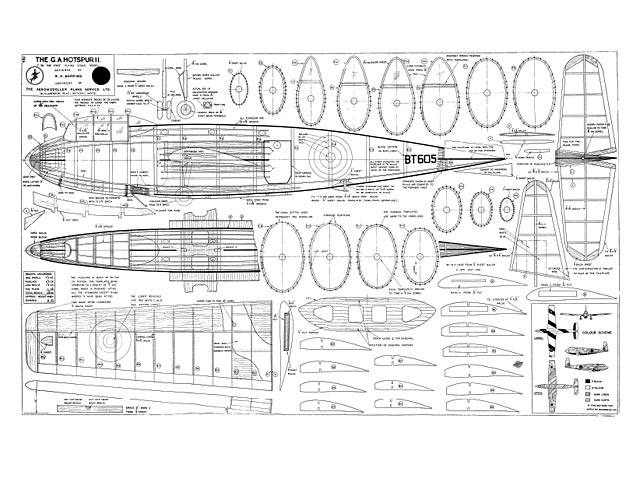 Quote: "Designed and built by Ron Warring and Bill Dean of the Aeromodeller staff.

One of the worst bugbears of modelling full size gliders is that, in most cases, only a very small portion of the fuselage projects in front of the main plane leading edge. Which usually means that something like half a pound of lead has to be placed in the nose before the CG can be shifted forward to the correct position.

The wing section employed on the full size machine is interesting, there being quite a deep convex under-surface to it. It would appear to be after the style of the RAF 31 airfoil, which is hardly the type one would chose for model use, as soaring flights - unlike the full size machine - are aimed at. So on the model, the Gottinger 398 section has been used.

Although the scale of 1 in to the foot only gives a wingspan of some 46 in, the model is larger than would at first be expected. This is because of the rather low aspect ratio and blunt tips of the mainplane.

Providing the building instructions are carefully read and no attempt is made to rush the model, no real difficulties should be encountered in the construction. The trickiest parts to construct am the formers, which are wound from hardwood strip. A little time spent in making one or two practice formers will be amply repaid, particularly in regard to the lap jointing.

For ease of transport and safety in crashes, knock-off wings - both backward and forward - have been fitted. The fin plugs into the tailplane, which in turn is attached to the fuselage by rubber bands.

In short, the model has all the advantages of the non-scale type, plus the fact that it looks like the real thing. Ready for flying, the all up weight is 16 oz, which gives a wing loading of 8.5 oz / sq ft. Rather high, but as LG Temple and many others have shown us, the heavier type of glider is usually amongst the most successful.

Nearly all hard woods are called for in the construction, balsa only being used for the ribs, leading and trailing edges, and the sheet covering. This measure was not taken on account of the scarcity of balsa, but because of the greater suitability of hard woods generally, for large gliders.

Building instructions for each separate component are given in detail below. Although other parts may be cut out whilst waiting for, say, the wing panels to set - the complete assemblies should be tackled in the same order as they are described in the instructions. Slow-drying cellulose cement should be used for the hardwood joints and a quick drying cement for those of balsa..."

Quote: "Mary, herewith the Hotspur 2 plan. Sorry for the delay, but I had to go to Adelaide to get it copied, it was too big to do at home. Mike"

Article pages, thanks to Sundancer. 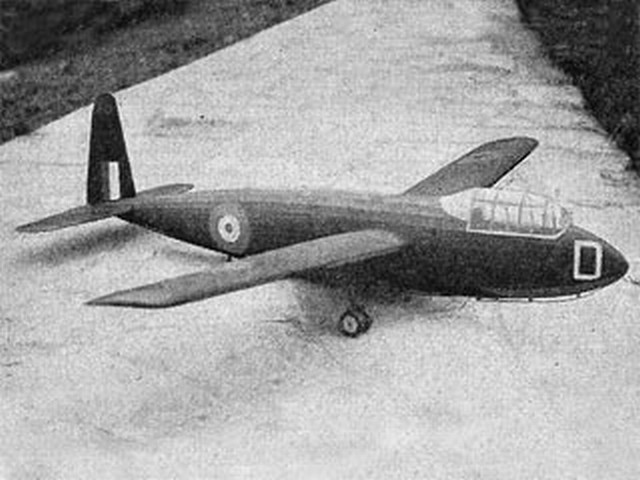