The Flick has been designed for those modelers who want the performance of a larger electric powered glider in a smaller, more economical package. The design is based on my experience with the S3021 airfoil in two kits for production, the Vengence and the Skimmer, as well as the aileron equipped Slick (oz6978) which was a construction article in this magazine Oct 95, Plan #1200.

The Flick can be flown with any of the smaller motors available in the 035 class, with four to six cells. There are a number of motors with Mabuchi size designations of 360, 370, 380, and even 390 that are available from several suppliers. Johnson also has small motors this size available from Hobby Lobby; and one prototype has many hours on it with a Sagami motor that is sold by Kyosho as a LeMans AP 29. The required controls are rudder, elevator, and motor.

There are some in-line gear reduced motors on the market for the Mabuchi 380 motor that would readily fit into the nose if this is your choice. The flying weight of your finished Flick will vary depending upon the motor and subsequent pack choice. The Speed 300 with five cells was the lightest at 21 oz. and the AP 29 with six cells was the heaviest at 26 oz.

The easiest way to build the Flick is to spread out the plans and walk through the construction, while reading the instructions so that you become familiar with the design: Then, using the templates, cut the formers and ribs, then cut the fuselage sides by first making a tracing over the plans for the side template.

Quote: "Hi Mary/Steve - here is Ted Davey's Flick from RCM 08-96. The model was featured on the magazine cover as shown. " 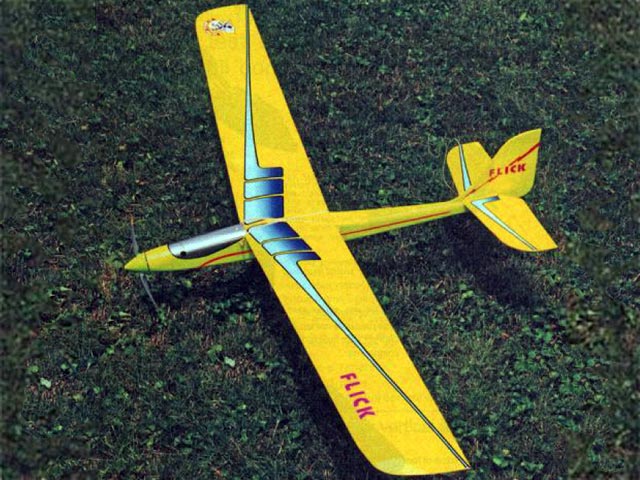