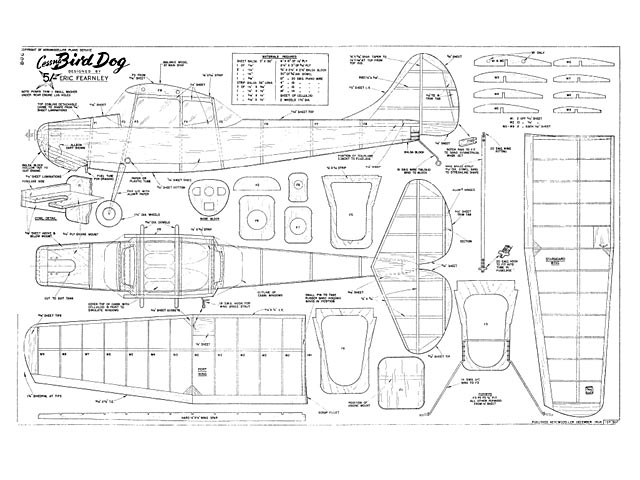 THE L-19 BIRD DOG (Cessna 305) was chosen for a flying scale model because it appeared to be a 'natural' for modelling. This has been proved true of our prototype, which combines the aerodynamic proportions of a flyer of inherent stability with the ruggedness of the sport model, yet retaining a true scale appearance with very simple con-struction. If this be your first scale effort, you have an ideal model, capable of being flown in a small field, in all but the roughest conditions, with the best possible chance of keeping it in one piece over a long period of flying activity. The prototype has had some months of flying, and to date, no repairs, major or minor, have been executed on it, and it retains its new appearance.

Any of the modern .5 cc engines can be used. Ample power will be available, and it is suggested that a rather larger prop than usually employed on this size engine will make for scale flying appearance, and also simplify trimming. A 7 x 4 should replace the normal 6 x 4 in.

Start construction with the fuselage by cutting out two sides from medium 1/16 in sheet, matching them for strength to simplify later assembly. The formers are cut from 1/8 sheet balsa, except F3, F4 and F5, which are from light plywood. Form the undercarriage as shown, and sew to the ply former F3.

Assemble the ply formers on the sides and when true and dry, add Fl, F6, F7 and F8. Fit the t h sheet pieces under the motor mount, and 'make sure they are parallel with the thrust line. Cut out the motor mount to suit your engine, and cement this in place, adding the 3/16 upper pieces, hollowed bottom, nose, and the tailskid blocks. When dry, carve to final shape, and sand smooth. Make the detachable cowl top from laminated 3/16. Cover the rear of the fuselage with pliable 1/32 sheet. Avoid hard, brittle wood. Cover the bottom using strips at the front end where compound curves are indicated, and in one piece at the back. Steam if any trouble is experienced.

Root ribs F9 and dowels arc added, making doubly sure that the incidence is true, and then add celluloid window frames, and tube to take struts for wings, etc.

The wing tapers from the halfway mark, so it is best to assemble in two stages - the root, straight section, and when dry, the tapered tips. The cut-out spar shows this change in taper. When removed from the building board, fix the strut fasteners, make the struts from dowel and sand smooth.

Nothing could be simpler, than the flat plate tail surfaces. Small trim tabs are an aid to trimming to allow for small errors in setting the tail incidence.

Cover the fuselage with lightweight and the wing and tail with heavyweight tissue, using sanding sealer on the fuselage and two coats of clear on the flying surfaces. Cement the tail surfaces in place after covering. European Bird Dogs are khaki with white lettering while those in the USA are aluminium with black letters.

Trimming should be easy, but don't be careless with it. Balance where indicated, after fitting motor with outside holes to allow side thrust to be adjusted. A small washer should be placed under the back of the motor lugs for temporary down-thrust. If a sharp left or right flight is indicated, apply sidethrust to correct, leaving the rudder alone at this stage. After a power flight, watch the glide. Too steep a glide is caused by not enough longitud-inal dihedral - in other words, put up the tail tabs a little. If a stall follows this on power flight, add downthrust. Alternatively, a stall on the glide calls for the reverse - less tail tab angle: and less down-thrust if it is not climbing on power. The original model is so foolproof that it has been flown with many different trims, and with engine sidethrust either way." 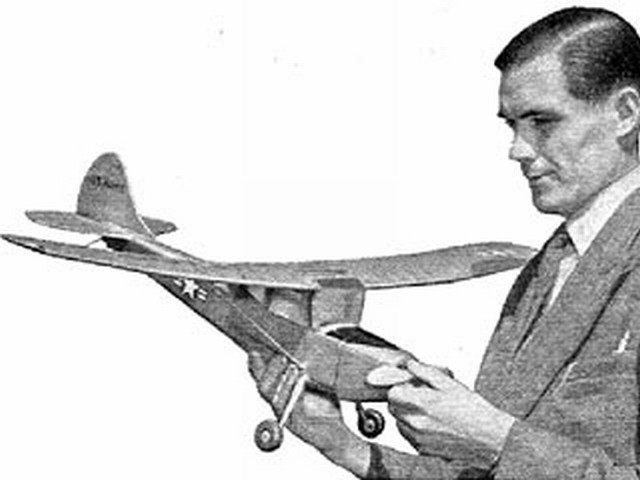