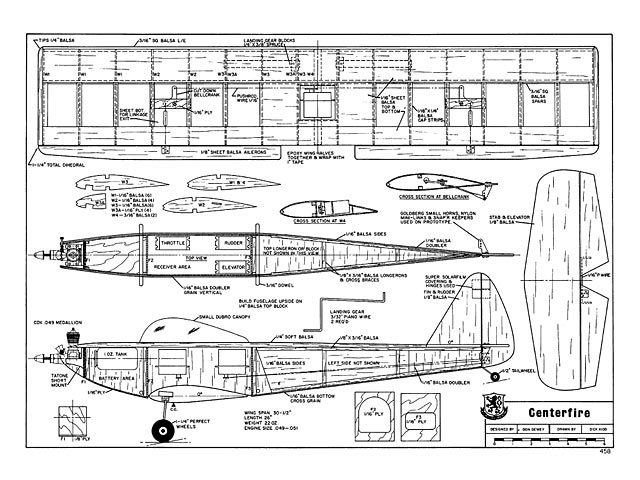 Several years ago I became intrigued with the idea of a truly small, full-house low wing multi and began toying with various design ideas. In December of 1968, RCM presented Jan Sakert's Rimfire (oz4999) a thirty inch span RC aircraft designed to accomodate the ultra small digital proportional systems that were then currently under research and development by several manufacturers.

With the encouragement of the lightweight digital systems, we experimented with various shoulder and low wing designs attempting to eliminate, insofar as aerodynamically possible, many of the problems associated with the small, lightweight models. After building and flying the Rimfire, we decided that it would be necessary to eliminate another 6 ounces from the 28 ounce weight of that model, as well as to provide a semi-symmetrical or symmetrical airfoil in place of the flat bottom section used by Jan Sakert. Both of these objectives were accomplished with the Centerfire since its all up weight, ready-to-fly, was 22 ounces, and it employs a semi-symmetrical airfoil section.

The design is very reminiscent of the Orion (oz927) with the same type of nose configuration and conventional landing gear. Our design was not intended to be aesthetic, but functional, in order to check out some of our own particular ideas concerning the smaller model. A semi-symmetrical airfoil section was used with 0-0 settings. The only drawback to our prototype was a slipping throttle ring on the Cox .049.

The model itself is quite rapid and performs most maneuvers with ease. Its roll rate is extremely fast due to the amount of area used on the strip ailerons and in fact handles very much like its larger counterparts. In the air it appears to be much faster than it actually is due to its relatively small size.

If you are intrigued by the vest-pocket sized aircraft, this model can be built very quickly and with a minimum of expense, and will be a show stopper at your local field due to its performance capabilities.

Detailed construction notes are simply not necessary in this model and we definitely do not recommend it to the beginner but only to the experienced flyer. We would definitely suggest using a Cox TD .051 with, or without, throttle. Although the Cox Medallion will pull the Centerfire through the air at a rather quick pace, vertical maneuvers did suffer from the loss of the slight margin of power the TD .049 or .051 can provide.

An added advantage to the small lightweight model is its ability to withstand rough treatment - it is very much like throwing a feather against a brick wall - the feather sustains little or no damage due to its own light weight.

The fuselage sides are constructed of 1/16 balsa with 1/16 vertical grain doublers from the nose to the trailing edge of the wing. The firewall is 1/8 ply and the two bulkheads are 1/16 plywood. The top block is a sheet of soft 1/4 balsa while the bottom planking is crossed grained 1/16 balsa sheet. 1/16 plywood is used to sheet the bottom of the fuselage forward of the wing. Tail surfaces are constructed from 1/8 soft sheet..." 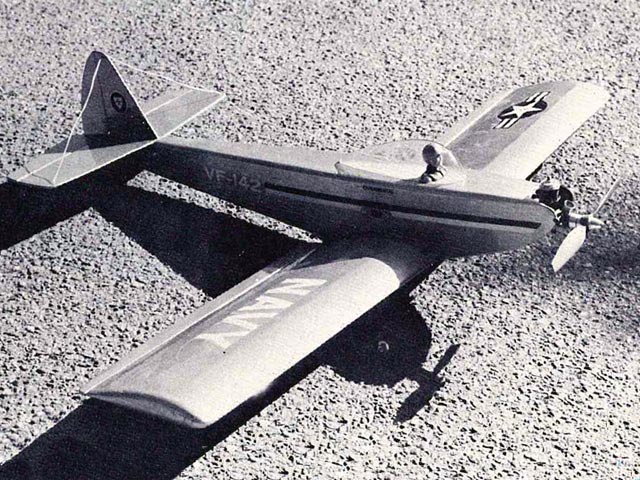