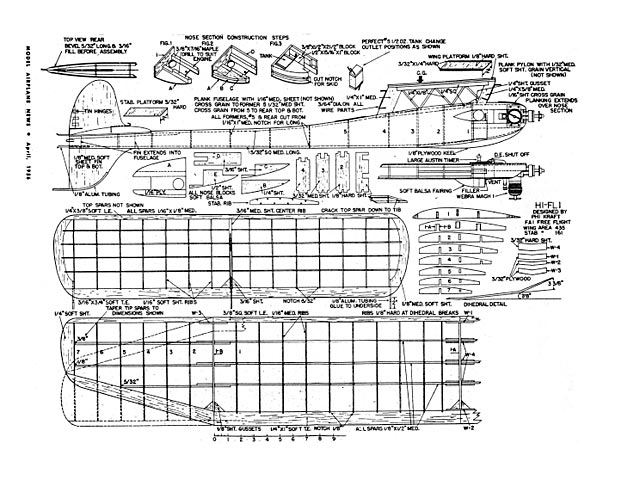 Quote: "Tired of fast, hot aircraft that make like post-hole diggers? This he-man's .15 job puts out, but requires minimum of adjustments. S'fact.

After a 12-year lay-off, the author started model building again a few years ago and soon found that there was much to learn and unlearn in developing a successful contest free flight. First experiments were aimed at high efficiency with aspect ratios of from 10 or 12:1 and glider-type airfoils. Universally, these designs had beautiful glides but proved completely unsuited to today's contest conditions.

It soon became evident that there is no substitute for consistently putting a gas model 'way up. The greater the altitude achieved, the greater chance the model has to drift into thermal activity; and even without thermals, the average time will be consistently good.

The well-known prerequisites for a fast climb are as high a power-to-weight ratio as possible, clean design and the ability of the model to convert the engine's power into a consistently smooth flight pattern. Of the three, the latter is probably the most important.

The difficulty with hot, fast aircraft is that most of them end up making like post hole diggers. Only with careful adjustment by an expert are most of today's contest designs capable of handling large amounts of power. Cross-thrust and rudder, thrust into wing wash and other counteracting force adjustments are usually brought into the picture. The trouble with adjusting flight pattern in a model is that the effects of the various forces employed vary widely with speed. Any mishandling which upsets the delicate balance of such a model, with resulting increase in flight speed, often ends in disaster.

Aside from achieving happy performance, the primary aim in developing Hi-Fli was to produce a model in which slight trim would be the only necessary adjustment. After a great deal of experimentation, this FAI-sized design in-corporated the solution to that problem. The first model of this design flew in April of 1954 and since then five differ-ent sizes ranging from 184 sq in to 780 sq in wing area have all flown with identical characteristics: ie, an extremely fast climb in a loose - almost straight-up - right corkscrew with perfect transition to a good glide. No radical adjustments have been necessary on any Hi-Fli.

Also above average has been contest success. In 12 major Southern California contests, has won nine firsts and several seconds and thirds. The model presented here is a lighter cleaner VTO version of the earlier FAI design, and achieved high time in both the regional FAI eliminations and Southern California finals... " 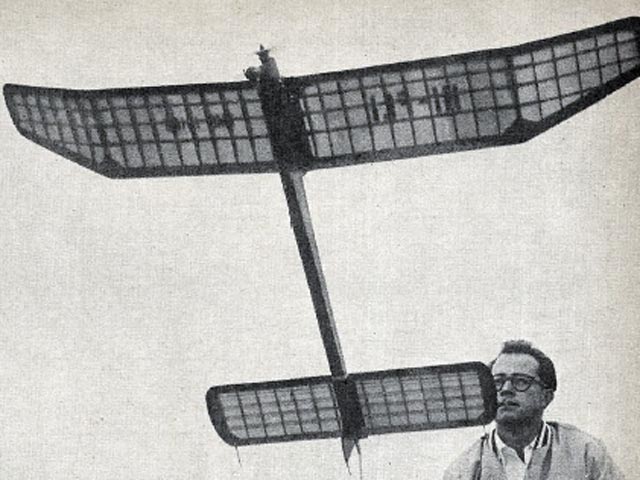