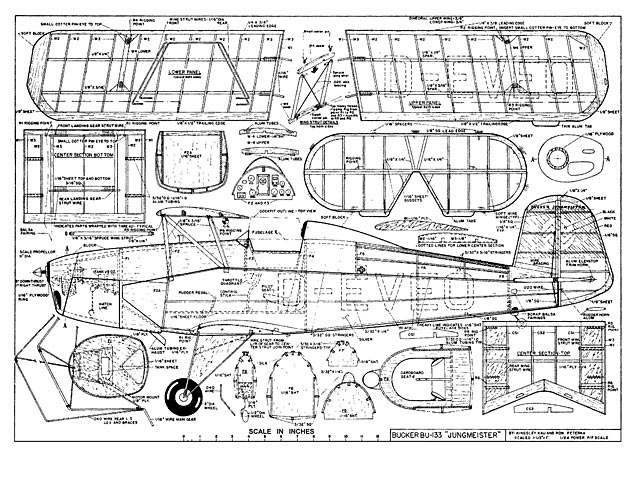 Flashing through a snap roll, climbing over the top of an inside loop, or just sitting at rest, the Jungmeister is a beautiful aircraft. Bevo Howard, always in contention for top honors at acrobatic flying, has called the Jungmeister, 'the finest aerobatic plane ever built.' His own Jungmeister has long been a familiar sight at air shows and exhibitions around the world.

The Jungmeister was designed and built in Germany in 1935 by Carl Bucker as a high performance, single-seat advanced aerobatic trainer; successor to his popular Jungman two-seat trainer. According to the Versailles Treaty of 1919, Germany was allowed only small civilian aircraft and some medium sized transports. Hitler promptly organized these sport aircraft to train the pilots of his illegal Luftwaffe. In 1939 when Hitler invaded Poland, airpower played an important part in the victory he gained. Hitler's pilots, many of them trained in Jungmeisters and other sport aircraft, and flying fighters and bombers converted from supposedly peaceful civilian transports and pleasure aircraft, completely outclassed the obsolete and unwary air defenses of Europe.

The Jungmeisters were built in several variations from 1935 to 1938. They all had a wingspan of 21 ft 8 in, with identical wing panels. The wings were fabric covered, of ply construction, and control surfaces were aerodynamically balanced.

Jungmeisters were generally powered by radial engines with most models using a 7 cylinder Siemens SH 14a of 160 hp. Bevo Howard's plane was fitted with an American Warner Super Scarab motor of 185 hp to handle his extreme flying conditions. Another version of the Jungmeister used a Hirth HM 506 140 hp 6 cylinder inline motor. It is this inline version we have chosen to model. The clean lines and easy engine cowling made this an easy choice.

The model is built to a 1-1/2 in to the ft scale, with a wingspan of 32 in and a fuselage length of 29-1/2 in. This model can be powered by almost any 1/2A glow motor, as shown on the plan, or by one of the excellent small diesel motors available to modelers today. Diesel power gives an added advantage of longer life for a time consuming finish. Diesel fuels are much milder than glow fuels.

If your appetite is whetted, let's get down to building. Start construction by cutting fuselage formers to the heavy outline shown on the plan side view. Glue in a 1/8 sq spacer at the tail and work forward adding formers F8, F6, and F4. Add the fuselage floor now; fuselage sides are parallel from F4 forward to F2 bottom..." 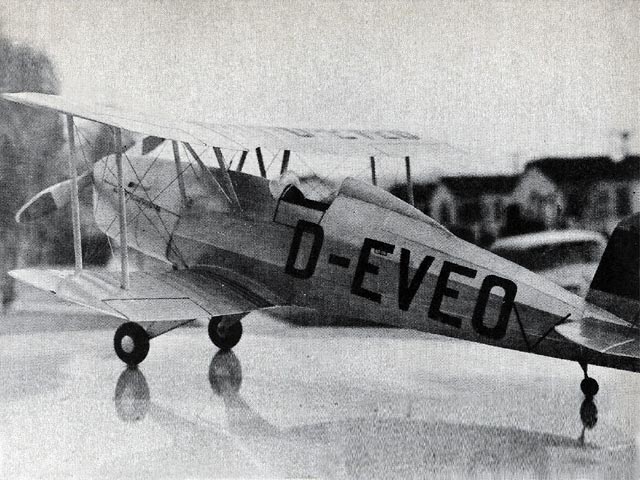