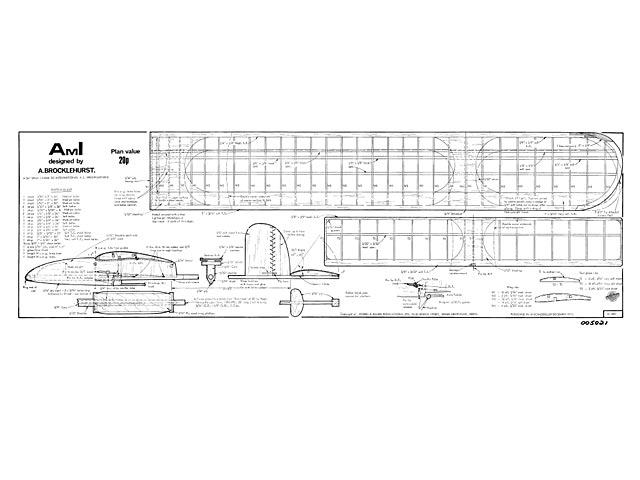 Quote: "THE FIRST A/1 GLIDER in this series had a wing similar to AmI, but had a balsa 'box' fuselage and 'T' tail. After one or two instances of tail flutter this was altered to a semi-high tail with dihedral - a layout which the designer still thinks has advantages for still air. However, this arrangement gave poor towing characteristics although the glide was good, in fact, the model was eventually lost.

The second model was experimental (see Aeromodeller April 1970) having a glass fibre pod with alloy tube boom - the wing had a sunken 'box' spar. Again a good glide performance resulted but the use of a constant diameter tube caused the weight to be in the region of 7 or 8 oz. This model was broken before it was fully trimmed.

Soon after, the present wing was started, the sunken spars being retained to try and maintain a laminar flow over the upper surface of the wing, and to avoid sudden changes in curvature usually present due to surface spars and tissue sag, which may cause early breakaway of air flow. This wing was then put away for some time while the fuselage was thought out.

When shown an AI size glass fibre blank, it was realised that this was the answer and a couple of days later the fuselage and tail were completed!

Trim flights in initially calm, but later gusty conditions, showed that the model design was sound. It was trimmed using Alan's own technique of hand launching to deter-mine the direction of the natural turn, then making the auto rudder force the model to glide in the opposite way. Therefore, natural warps tend to stop the model spiralling in and give a tighter, more controllable turn.

No mention has been made on the plan about the use of a tubulator (sometimes required on a smooth wing) as a means of boundary-layer control. The wing is intended to be a laminar flow section (at a Reynolds Number of 36,000 the airflow should tend to be laminar) and as' such should be better than a turbu-lated section provided the boundary layer does not separate before reaching the front edge of the TE. However, in gusty conditions, random disturbances may cause the airflow to separate with a delay before reattachment.

The whole subject of boundary-layer theory is very complex and Alan does not intend to make any definite statement on this until he has a greater knowledge than at present, not wishing to influence people into sticking turbulators all over the place and possibly causing the flow to separate rather than causing the boundary-layer to re-energise.

As it stands, the model flies well without a turbulator although it is possible that there may be some advantage in using one, IF this is done correctly. However, it is suspected that the vortex street pattern may not form over a turbulator at such a low Reynolds number. and therefore a tubulator wrongly placed may itself promote early separation of the boundary layer.

Construction is best started with the wing, as this allows the dope to 'set' whilst the tail and fuselage are built. First make the tips from 7 laminations of 1/32 x 1/2 x balsa strip. This is most easily done by cutting out the tip shape from a piece of 4 inch plywood, as shown in figure I. The strips should then he soaked in water to make them pliable, and are then bent round the male half of the former, each being glued with PVA. Now push the female mould in place and clamp in position, taking care not to glue the laminations to the plywood! The outline is roughly sanded to shape when set, final sanding being done on completion of the tip...."

Article pages, thanks to algy2. 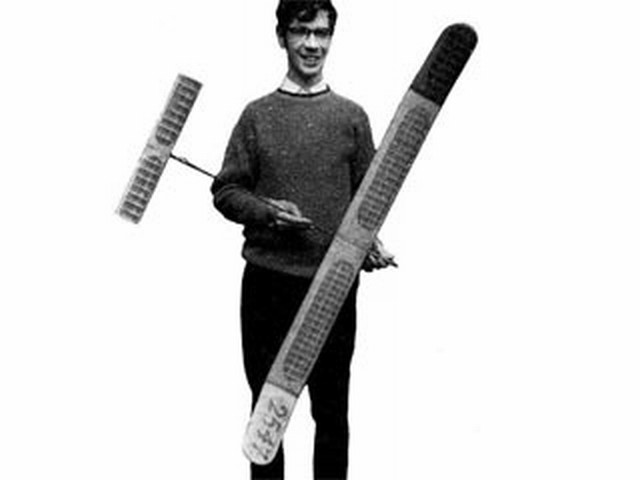