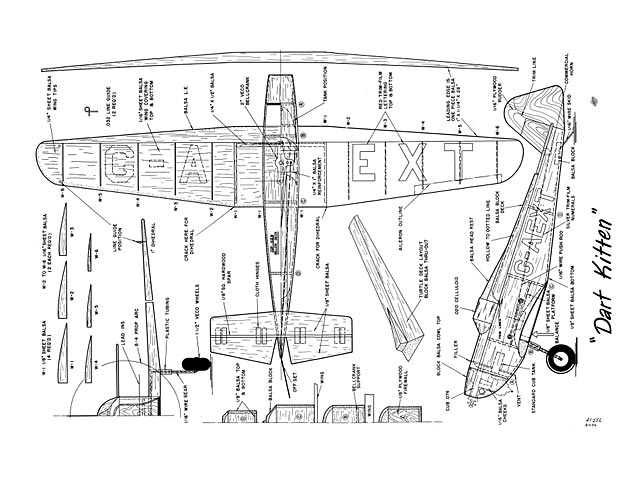 Quote: "Dart Kitten, by Paul Palanek. You can look high and low but you'll have a tough time finding a scale model airplane more perfect for U/C flying than G-AEXT.

The Dart Kitten made its debut in England early in 1937. Designed by AR Weyl, with an eye for the average income buyer, this machine was powered with a French 24/27 hp AVA, flat-four two-stroke engine.

The second Kitten was decked out for flight in June of the same year. In this design the Ava was replaced by a 36 hp JAP, which increased its rate of climb and cruising speed. This airplane flew in and out of fields too small for a Puss Moth.

The overall span was 32 ft, length 21 ft 9 in, maximum speed was in the neighborhood of 95 mph and cruising at 83 mph. This machine was able to climb 600 feet per minute.

In scanning the plans you will note the simple construction. The fuselage is box shape, and the wings are sheet balsa both top and bottom. The color scheme is attractive: silver wings and eleva-tors with red fuselage and silver trim. The wings carry red numerals and the fuselage silver.

Construction should start with the fuselage. The sides, bottom and formers B, C, and D are shaped from 1/8 sheet balsa. The lower portion of the fuselage sides are cut out to allow for the wing. The firewall, former A, is cut from 1/8 plywood. When the two sides and formers are assembled, a 2 in Veco bellcrank is installed. A 1/8 hard sheet balsa platform supports the bellcrank. Two holes are drilled in the left side of the fuselage and in line with the bellcrank. The .032 lead-ins are slipped into these holes, and soldered to the bell-crank.

The pushrod is shaped from 1/16 wire and fastened to the bellcrank. Allow sufficient length for final fitting to the elevator assembly. The forward and rear decks are shaped from soft balsa blocks. The blocks are preshaped and then hol-lowed. When both blocks are completed, cement them in place. The headrest is also shaped from the soft balsa and cemented to the turtle deck.

The tail assembly is made from two types of material. The rudder is 1/16 plywood, the elevator and stab are 1/8 medium hard sheet balsa. Plywood was used for the rudder in place of balsa to cut down any possible damage resulting from nose-over landings. The plywood can take the pounding.

When the 1/8 sheet balsa stab and elevator are shaped, a 1/8 sq piece of hardwood joins the elevator halves together. Cloth hinges are used to fasten the stab to the elevator. A horn is fastened to the elevator's hardwood spar. The elevator assembly is securely cemented in place. The loose end of the pushrod is now inserted and soldered to the horn.

Before securing the rudder in place, score a line on the right half along the hinge line with a razor blade and crack, to give the required rudder off-set. Cement this break well.

The fuel tube of the standard Cub fuel tank runs through a hole drilled in the engine firewall. Plastic tubing 1/8 in dia is used for both the vent and filler.

The .074 Cub or similar engine should be mounted temporarily with wood screws to provide a guide while fitting the sheet balsa cowl. The top portion of the cowl is carved from soft block, the sides are made from 1/16 sheet balsa. All three units are cemented in place and shaped to the contours shown. The engine is then removed.

The landing gear is installed before the upper half of the wing is sheeted over. The gear is shaped from 1/16 dia wire, and is cemented to the rear of the leading edge, between the extreme W-1 ribs. A piece of balsa 1/4 x 1/2 in is used to reinforce the gear wire.

Prior to finishing the model, using fine sandpaper, gently sand all sur-faces and apply three coats of clear dope. A light sanding between each application will help the finish.

The color scheme calls for the use of red and silver dope. The fuselage is red with silver trim, the wing and tail are silver with red trim. All lettering was cut from silver and red Trim-Film. For a neat and glossy finish apply at least three coats at colored dope.

A dummy sport pilot is mounted in the cockpit. The pilot's enclosure is made from .020 celluloid. Plastic tubing is used to give the landing gear a shock-absorber appearance. The wheels are 1-1/2 dia soldered to the gear. The wingtip line guides are formed from .032 in wire, two being required. Cement the guides as shown on the upper surface of the left wing tip.

The entire ship is now given two coats of fuel proofer. Be liberal with the engine compartment. The engine is fastened in place and a 1/8 in fuel line connected. With a 6 x 4 prop mounted and a full tank of fuel, the Kitten should balance as indicated on the drawing. If not, lead weight can be used to bring the model to proper balance.

The model was flown on 45 ft lines with little after-trimming required. The box on the right lists the ma-terials required; use balsa unless otherwise specified." 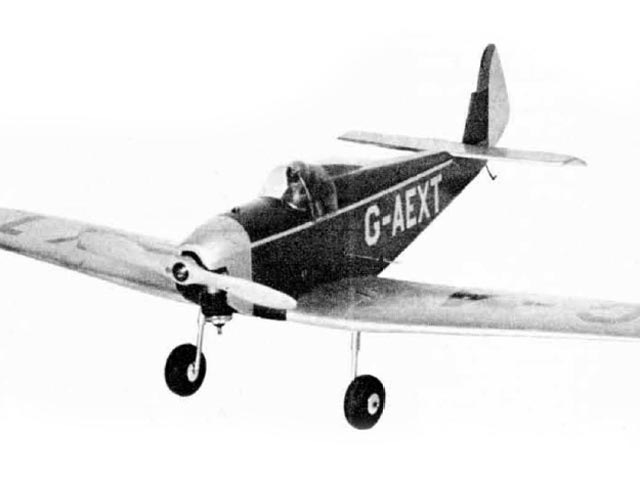