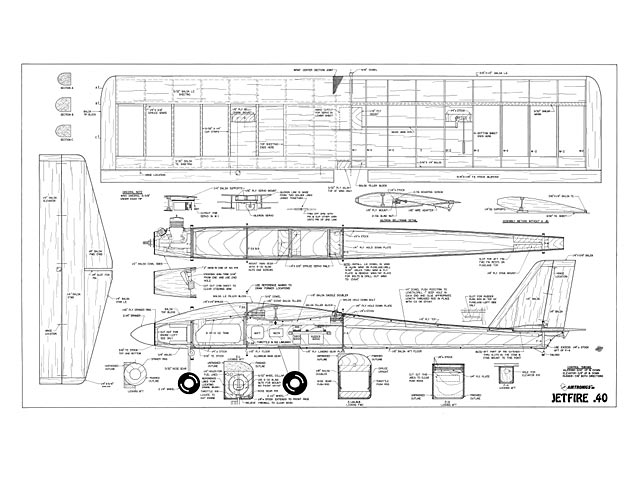 Quote: "Steve, Looking through your site, I noticed that you don't have the Airtronics Jetfire .40 listed. I recently scanned my set of plans into a PDF file so that I could make copies for another gentleman. I have attached a copy of the PDF file if you would like to upload it as well. David"

Update 09/07/2018: Added kit manual along with PDFvector plan tracing and CAD files, thanks to AlanSinclair.

Quote: "The Jetfire .40 is an excellent choice as either an advanced trainer or a sport model. The shoulder wing design and long tail moment provide solid and predictable handling white still being capable of aerobatics and sustained inverted flight. The semi-symmetrical airfoil gives the model a very broad speed range: with a hot .40 at full throttle the Jetfire will surprise you with its speed, but you can still throttle back and come in at a walk on landings. The tail skid in the kit wasn't originally there - we added it only after we tore the Monokote off our prototypes while dragging them in on landings!

The structure is simple and strong, yet the use of the thick top block lets the nose of the Jetfire be shaped to a streamlined look and avoids that 'box with a wing on top' look. Enough of the preliminaries, let's get on with the building!

All of the building notes and construction photos that follow were done by Jim Pearson, a very talented modeler and long time friend. We thank Jim for his help and are sure you'll agree he's done a first rate job... "

Quote: "Products in Use: Airtronics Jetfire 40. By Bill Clarendon. This high wing sport job, with a NACA 2412 airfoil, is a gentle-flying, good-looking R/C model that is much more than an aileron trainer. It's simply a pleasure to fly.

To me, the firm of Airtronics Inc symbolizes a lot. A lot of quality, a lot of customer courtesy, and a lot of good model products. Granted that their line of kits may go in the direction of the sailplane enthusiast, but their powered sportplane offerings are first rate for any sportflier, and I think they would appeal to any flier.

The kit quality of the Jetfire AO is absolutely and categorically second to none. No die cutting, just good machined balsa and pre-cut lite ply. The Jetfire .40 is a 54-inch span, constant chord high winger, a sleek-looking sport job. It is actually designed for the transition of the three-channel neophyte to an aileron trainer. The Jetfire however, is more capable of things other than aileron training. It actually means it's that gentle.

The Jetfire .40 can do anything you tell it to do. This I think can be attributed to the airfoil used (NACA 2412), a very generous tail moment, and a large stabilizer area, coupled with an above average wing area (11-inch chord, and 54-inch span).

CONSTRUCTION Construction of the Jetfire is very conventional and quick. By the way, the hardware included is phenomenal. The wheels, tank, radio, and engine were the only things not included. Arm yourself with some Hot Stuff (thick and thin), a Wedgelock sanding block, and electric drill and Dremel tool, and you'll be all set.

The Jetfire wing goes together quite rapidly, so the construction phase will be brief, as the instruction is very complete with clear photos. The wing is built first, in halves over the plan. The machined leading and trailing edges were quite nice. Again, the machine-cut ribs and stock were superbly done. The builder should pay attention that the wing center sheeting is longer on the bottom than the top of the wing.

It should be noted that there is no center brace. By glassing the center section with glass cloth and Hot Stuff, the section is reinforced. It should be noted that the ailerons are of the bellcrank method and not torque rods. Tack your ailerons in place and sand your wing tips to shape and contour according to the plans. This will insure accurate aileron location (assuming your wing was built straight and square). Set the wing aside and dig your fuselage pieces out.

FUSELAGE The fuselage actually consists of few components. The sides, tops and bottoms are precut to shape from 1/8-inch thick lite-ply. Mount your engine mount to the firewall and drill the necessary holes for the fuel lines and nose gear steering and get ready to assemble the precut sides and formers, etc. There are minor pieces of triangle stock that are comer-glued in various places. Two critical points of building the fuselage are..." 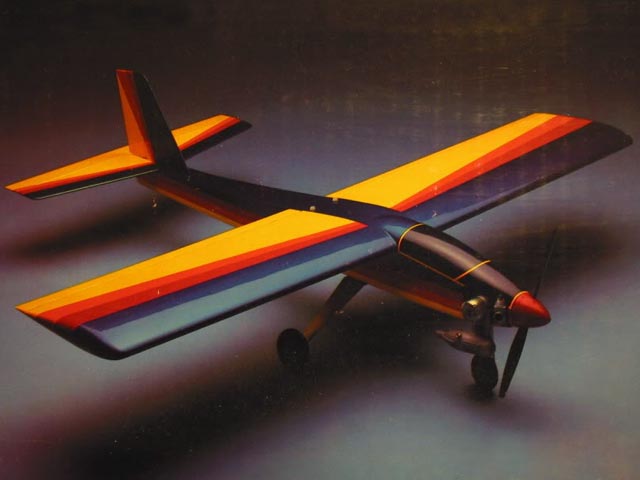