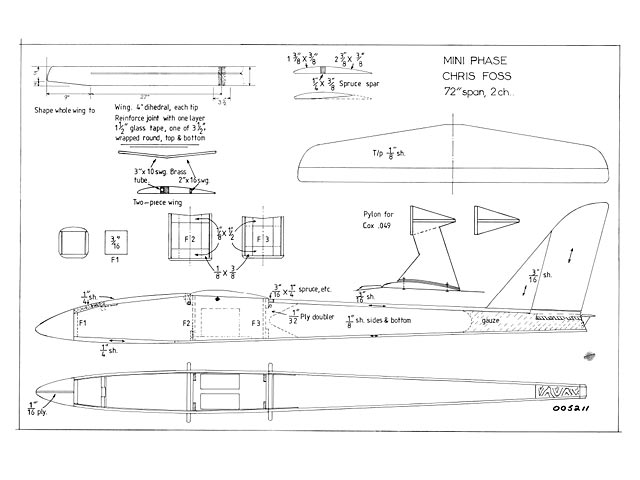 ON LOOKING at the plan, one can see at once where the parentage of this model lies. It is a small-scale version, in the fuselage at least, of Chris Foss's earlier Phase designs - hence the name! The wing, however, is entirely different, being an all-sheet affair with a single spruce spar. The section is flat-bottomed and fairly thin, for penetration.

The box-lid declares that the model is 'quick to build,' and here I would totally agree. Mine went together without any fuss and I really enjoyed the assembly work. Die-cutting and selection of wood were first class (except for one item) and the plan and instructions were clear and complete. The preamble also states that the model is ideal for beginners so, with them in mind, I decided to make the model as shown on the plan, as a 72 in sailplane with rudder and ele-vator controls. There ate other ways to make the model, adding ailerons and reducing the wingspan, but I thought that a beginner would be best with rudder/ elevator and this was the review that would help him most. The only variation from 'normal' was that I made the wings two-piece, but full instructions for this are given on the plan and text.

Assembly Phase: I used PVA glue for all joints, except the load bearing ones, which called for an epoxy adhesive. The spruce spar is 36in. tong but is reduced for the balsa infill at the tips, which effectively lessens the mass at the ends of the wings. The instructions also suggest that the wing panels be weighed and balanced, so that the heavier end, if any, may be placed at the root. Washout is induced by trimming the trailing edge and sanding the underside of the wings. (just a word of warning here; if this is your first kit, make sure that you build a left and a right-hand wing - - it's easy to do two the same! Also, note that the balsa infill pieces go on the tip-side of each panel, not the root.)

My wings went together very quickly and, following the instructions for a two-piece wing, soon had tubes and dowels in place. If you have not built a wing with this joining method before, the instruction sheet makes it an easy job, when followed carefully. Covering the wing is left to the builder after fibreglass is added to the root to support the tubes, and may be film or tissue. The fuselage is equally easy to build, being con-structed mainly directly over the building board. It is probably easier to cover and hinge the tailplane and fin, rudder/elevator, before permanently fitting them to the fuselage, as this is the last thing to do before the fuselage is complete. A word here about the hardware in the kit. It is very comprehensive - a good point for someone building a model like this for the first time. No extra bits to buy is certainly a favourable mark.

Finishing and installation I covered my Mini-Phase in tissue throughout, but lightweight nylon is also recommended for the fuselage for extra durability. Radio installation is simple enough, though there is not a great amount of space for the Deac in the tiny nose. My Futaba receiver went in easily and I used Futaba servo trays for the two servos. The material for the push-rod (to the elevator) and for the rudder linkage (nylon rod and tube) is provided - and this method, with the push-rod emerging from the back of the fuselage, produces a very clean rear-end, with no unsightly bends of push-rod to be seen. It is also a very simple method and should prove no trouble to the tyro, if he is prepared to spend a little time and effort on the rudder push-rod-to-servo linkage, which calls for delicate fingers.

The only criticism I would like to put forward on the building side was the fact that the fuselage sides were of a very hard and heavy nature. The fact that I used a 500 Deac in the nose instead of the 225 shown, didn't make much difference to the balance, because of the very heavy balsa towards the tail-end. The model weighed about 13 oz bare (uncovered) and about 28 oz in flying trim (3 oz heavier than the 'average' quoted). According to the wing-loading nomogram in my copy of Radio Control Soaring (plug!) this gives a loadins, of 13 oz/sq ft.

Phase the music! At last, after a period of atrocious weather, the moment had come. The model, with all checks com-pleted, was launched into the 30 mph wind. First reaction was 'How did it get up there?' as the little Mini-Phase rose very quickly with the first burst of speed. As it settled down I knew almost at once that there was going to be no difficulty keeping this one up. I had the rudder on its smallest deflection and this proved to be a mistake, as the model got its nose downwind and was in the weak-lift area before I could get it round again.

With rudder on full throw, the control was far better and the turns, even with no ailerons, were very smooth and positive. I was amazed, turning the model back and forward in front of me, how Mini-Phase gained height on the turns. A touch of down elevator as she came round and the effect was instantaneous. Already I was enjoying myself, despite the strong wind, which had dropped only slightly.

I found I could bring the model over my cameraman, John Flockton, with ease, and hold it for a second over him by applying some up elevator. I held this up-elevator on, to see what the stall would be like, and the Mini-Phase dropped its nose, falling a little further than I thought it would before regaining the correct heading, though I feel this was probably due to the high wind. I dived it into the wind and, pulling on full up-elevator, did rather a nice loop. The main thing I noticed here was the sudden flap of the wings as they flexed slightly, (which is, incidentally, a design feature - what flexes doesn't break).

'Up there' seemed very satisfactory, but how about coming " down here?" Bringing the model round, I went too far downwind to my right, but was able to crab back along the slope, taking full advantage of what must have been very poor lift, to within a few feet of me. The landing approach was very smooth, the model showing no inclination to drop a wing, and the touch-down in the heather was very gentle, con-sidering the windy conditions. I was so taken with the low-level 'heather hopping' handling, that I re-launched and flew Mini-Phase back to the top of the hill. The model does a very smart line in stall-turns, looking rather impressive as the long wings flick over. The spin is more a spiral, though with ailerons could probably be improved.

Summary Mini-Phase makes an excellent beginner's project, but I expect to see many more experienced fliers out with them as well. It is one of the most pleasing models I've come across; both building and flying are straightforward, with no complications to catch out the un-wary, and seemingly no vices in flight either. In fact, Mini-Phase is very forgiving and its construction is rugged enough to take all the knocks of learning to fly. At the current price it must represent very good value for money and I think, from my own experience, that a fast builder could buy it one weekend and have it well finished before the next." 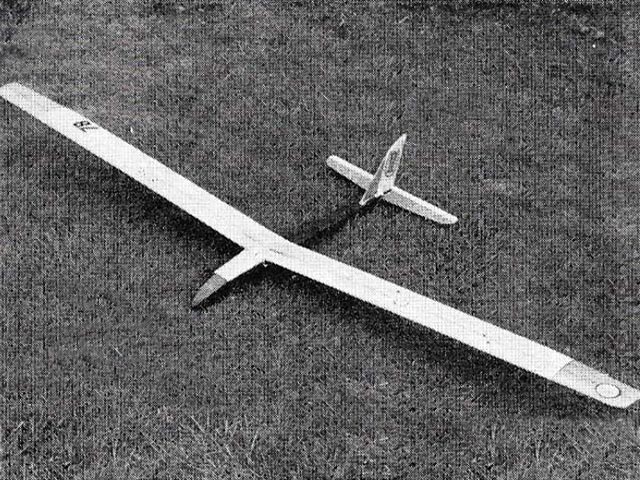