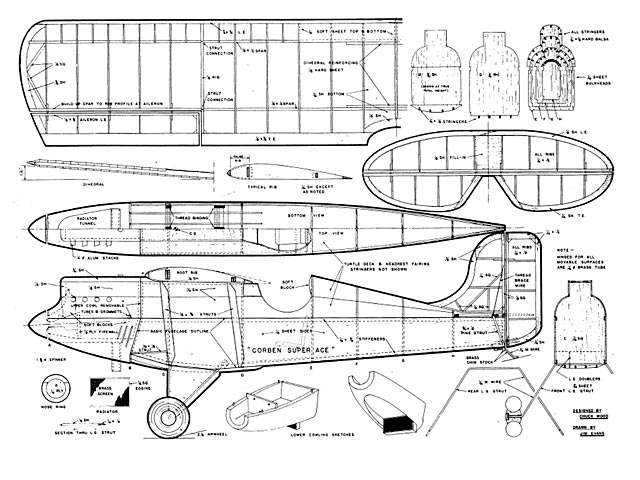 Quote: "Corben Super Ace, by Charles R Wood. One of the greatest of all-time home-built planes, was this belle of the thirties. Flies like a dream on .049.

The Corben Super Ace was a home-built airplane of the middle 1930's and one of the few successful airplanes powered with a reworked Model-A Ford engine. Some of the Corbens were factory built, but most of them were constructed by amateur builders in backyards and garages to plans and specifications supplied by Mr OG Corben. The structure was admirably suited to amateur skills, as many of the parts were fabricated from plywood and spruce, while the fuselage and tail components could be welded by a garage mechanic. Even today the basic design of the Super Ace may be found in the Corben Baby Ace - a modified and modernized version powered with a variety of lightplane engines.

The model is somewhat larger than the average Half A flying scale with a wing area of 240 square inches. This large wing area, combined with a weight of 10 ounces, has much to do with the realistic and smooth performance of the Corben. To see how realistically the model does fly, follow me if you will on a typical take-off and flight.

Imagine that we are at Arlington Airport ( 40 miles north of Seattle) on a warm spring morning. The trees around the perimeter of the field are dark green against a pale blue sky, contrasting sharply with brightly painted models in the air. Let's take the Corben out of the station wagon and walk over to the edge of the East-West runway where the model will have room to drift if the breeze is stronger aloft. If you'll fill the fuel tank, I'll connect the battery and check the 7 x 2 Tornado prop. Now a prime of fuel through the Cub's exhaust port and intake and we are all set.

We turn the prop through compression several times and then flip the prop smartly is the glo-fuel starts to sizzle inside the cylinder. One more smart flip of the prop and the engine barks into life. A slight adjustment of the needle valve, the steady roar changes to a high pitched whine, and the plane tries to surge forward. Now we'll quickly snap on the top cowling, quarter the model into the slight breeze and release our hold on the fuselage.

The Corben bounces a bit on the ribber airwheels as it starts rolling on the black-top runway. The tail skid comes up and the model accelerates quickly. One last little bounce, the wing tips bob in response, and the spinning wheels are lifted into the air. The ship climbs away from the ground in a wide left turn, banking very slightly away from the runway. See the trace of blue exhaust smoke trailing behind the model!

The Corben continues to climb steadily higher, getting smaller by the second until it is just a minute speck directly over head. Darn, how high is that model going to get - we'll thermal it yet if the engine doesn't quit. Whew, guess we are all right now. The engine stopped, but the model still looks awfully high. By the way, did you notice how the ship settled right down into the glide without stalling? Downthrust and the Center of Gravity well forward did that. Watch that glide carefully. It really looks good. Look at those cream doped wings flash as the model turns in the sun. Pretty, isn't it? Here it comes again, gliding overhead and turning downwind. Looks like it is going to land almost beside us when it comes back around.

The Corben approaches upwind gradually settling lower, and passes at shoulder height aimed for the runway. The wheels flick through some tall grass at the edge of the runway - a little lower and the air-wheels bounce on the black top. The tail settles and the skid touches with a little scraping sound. The flight is over. Shall we fly it again?

When building the wing, note that the wing ribs are threaded onto the spars, so make the spar cut-outs accurately. Note too, that the leading edge planking extends over only the first few ribs, and from there on false ribs are used. This is patterned exactly after the real ship, as is the scale rib spacing. The wing should be held down with rubber bands around the fuselage until the model is adjusted, after which the wing may be permanently cemented down and the wing struts fitted. The little jury struts- that show in the photograph are glued to the forward wing strut 1% inches from the fuselage and strut joint.

The main structure of the fuselage is formed by the 1/16 balsa sheet sides. Add the 1/16 x 3/16 stiffeners on the inside face of each side before gluing in the bulk-heads. The cowls under the wing are formed of 1/16 sheet balsa. This is a simple task because there are no compound curves involved. Mount the landing. gear before adding the stringers on the under-side of the nose. Note too, that these string-ers do not taper into the fuselage structure, but are cut off and bluntly rounded as on the real plane.

The engine cowlings look complicated, but if you make the upper and lower halves from soft blocks - lightly tack cement together - and then carve them to the side and top profiles of the nose, they are quite easy to make. The very top of the upper cowling is built up of sheet balsa as shown. The radiator tunnel is carved into the cowl-ing after the cowl has been hollowed out to the lines indicated. I grooved the inside faces of the lower cowling about 3/32 deep to take the 1/8 ply firewall. As a result, the firewall was a tight press fit into the cowl so that it could easily be removed to change the thrust settings on the engine.

Most any Half A engine with a long shaft may be used in this model. Just relocate the position of the firewall. I used a Cub .049B for power and cut away the inside forward face of the upper cowl to a thin wall so the engine would fit. The cowling is held together by tubes and grommets, (2 to a side), that make a snug fit when the halves are pressed together. The engine exhaust is carried away by the aluminum tubing exhaust stacks, while the intake air flows directly into the cowl behind the spinner.

Be sure to cover the fuselage sides, cowling and landing gear with tissue or Skysail to add strength and help fill the grain of the wood for a lightweight finish. The color scheme of the Corben may be as simple or as fancy as you desire. The Corben in some states was licensed and carried license numbers - in others it was not licensed, so the license numbers are optional.

Adjusting the Corben for flying is not difficult. The model should balance at the CG position shown on the plan. You will probably have to put some clay in the nose to bring the CG to this point. Washers should be added behind the left engine lug to offset it for 2 degrees right thrust. Downthrust is automatic if you duplicate the firewall angle shown on the side view. Offset the rudder to the left about 1/32 in for left turn in the glide and under power. By following these directions, if your model is built accurately, just remember that stalling in the glide is best handled by adding clay to the nose to shift the CG further forward. Do not take out of the wing incidence. Stalling under power is controlled by adding either a slight amount of side thrust or downthrust. If the glide turn is too tight, correct by adding opposite rudder. You will find that the Corben is an exceptionally stable and rugged scale model." 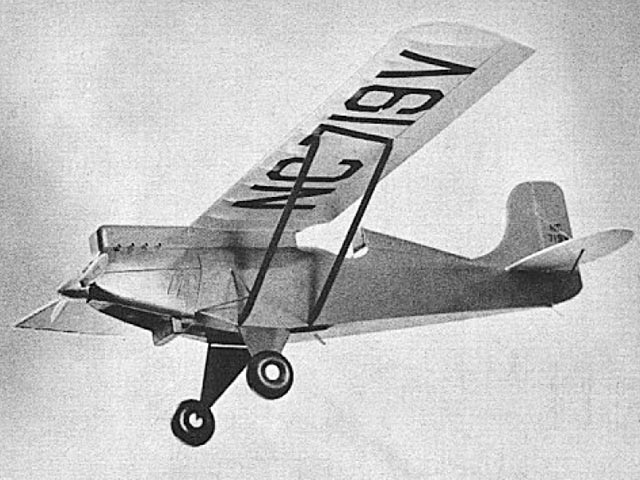 I have a blue print copy of this exact plan that I obtained years ago from John Pond. It appears to be based on the EAA .airplane that was built for the Madison Wisconsin Air Terminal. The plans seem very accurate except for the landing gear detail. Pictures of the airplane in the Madison Air Terminal can be found at the URL http://www.airliners.net/photo/Corben-Super-Ace/1024806/L/
RalphAnderson - 16/11/2013
Added two great photos of the completed Corben Super Ace, thanks to Oliver Dietze [more pics 003, 004].
Mary - 11/11/2017
Add a comment