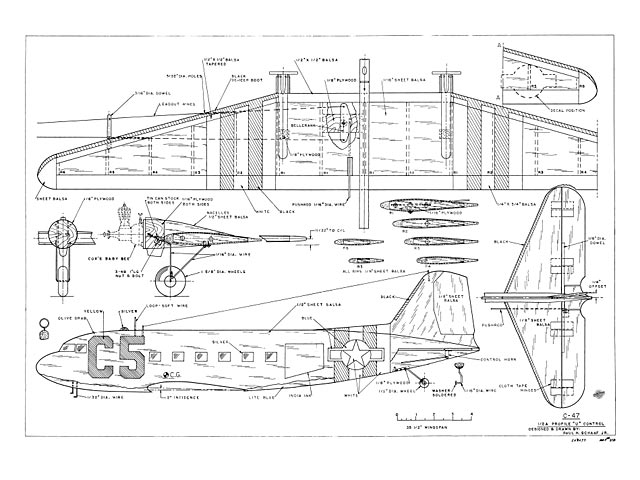 Quote: "With arm extended, several dozen butterflies U-Controlling in your stom-ach, you nervously glance along the U-Control lines. A quick pull back on the handle to check up and a quick push forward to check down and you are ready to go. The two Cox .049 Baby Bees are howling at a steady RPM. The co-pilot, at your signal, checks that the plane's heading is perpendicular to the lines and you're just about set. Your hand waves for release, and the C-47 lumbers forward. It moves faster and faster as it sweeps around pulling taut on the lines and as you gradually lower and then raise your wrist with the elevator following your motion, the wheels lift off and you're flying. You level off at around ten feet and as the plane circles you with a solid feel on the lines you relax and know all is well.

After a number of flights my co-pilot threatens to go on strike unless he gets a chance to fly also. I never heard of a ten year old son striking against his dad, however, in this day and age who knows, so I relinquished the control handle to my young companion. That was the last time I had it that afternoon.

Fun! You bet it is. You can have it also - so let's go. Steve had recently acquired the touch or feel for U-Control flying. With some money he had saved he bought a Goldberg Wizard. With my guiding hand over his he .assembled the kit, painting it an attractive red and white color and then was set for his first lesson. The first six flights or so were a struggle; the flight being terminated by the plane diving into the ground or zooming over his head into a controlled crash on the other side of the circle. About the seventh flight he suddenly got the knack and from a half a lap he suddenly began to fly two or three before control was lost. After that things settled down and flight after flight ended only when fuel was exhausted in the tank. Steve is still a bit learny about starting the engine much preferring to handing me the bandaids, however, he enjoys servicing the motor by filling the tank, priming the engine and keeping everything spic and span.

Before starting to build the model a few historic facts regarding the plane may be of interest.

The DC-3, the civilian version of the C-47 is considered by many people to be one of the most important airplanes ever built. This plane more than any other one, helped develop the modern system of air travel. It was in its day, one of the safest, and most dependable airplanes available. It first went into service back in 1930 and still to this day is in service both here and overseas on feeder airlines and as company owned planes.

The C-47 served in every theater of World War IL It performed splendidly as a troop transport, cargo carrier and also as a glider tow plane. The writer of this article served in a glider airborne unit and saw for himself the stamina and versatility of this plane. In one memorable episode while being evacuated in a hospital plane I remember that the plane took off from a grass field so short I felt I could throw a rock from one end to the other. The takeoff must have been accomplished at a 45 degree angle.

The C-47 had a wing span of 95 feet and a length of 64 feet 5-1/2 inches. It was powered by two 1200 HP Pratt & Whitney 14 cylinder Twin Wasp Engines and it cruised at 185 miles per hour. Its stalling speed was 67 miles per hour so you can see it was quite a docile machine, a favorite of many pilots. It could fly on one engine just as our model can do in a most realistic fashion struggling up from take-off with engine roaring, fighting for altitude. It will stay in the air, however, as you gain altitude on one engine and the plane becomes more vertical over your head you face the same problems these early pilots did in keeping an airspeed that will permit your remaining airborne. Our model on one engine requires about a third of a lap to get airborne. You have to be sure, however, that only the inboard engine is running to prevent model from turning into the circle which would be the case if only the outboard one was running. When starting the engine, always start the outboard one to make sure it will be the first one to quit also. Now on to the model!

TAIL SURFACES: Cut the elevator and rudder from medium 1/8 sheet balsa and round off all edges using a medium grit paper and then finish sanding all over with #400 grit. Join the two movable elevator halves with 1/2 in hard wood dowel making sure the spacing is correct to match up with the end of the horizontal stabilizer. Attach the movable elevator to the stabilizer using cloth hinges. I used a Perfect control horn, however, any other small one can be used. On mounting the rudder, make sure you have about 1/4 in offset at the rear as noted on the plans.

FUSELAGE: The fuselage is cut from 1/2 in soft or medium balsa sheet. If you are using 3 inch sheet you have to splice an extra piece to the width since body is 3-1/2 in wide. Cut the slot in the rear for the stabilizer and make the cut out for the wing. Please note we have an incident angle of 2 degrees for the wing. Round all edges where noted and then sand smooth. Mount the tail wheel in 1/2" plywood section with fine wire and lots of cement and then cement to slot in the fuselage.

WING The wing is built in one piece. Begin by cutting out the ribs from 1/2 in balsa sheet. The trailing edge spar is 1/4 x 3/4 tapered to about 1/16 at the end. The leading edge is 1/2 x 1/2 stock having a constant cross section between the nacelles but beyond these it tapers uniformly when viewed from the front 1/4 in thickness at the wing tips. When viewed from the top it is a constant 1/2 in width. Please note the ribs do not come flush with the leading and trailing edge surfaces but are depressed on top and bottom by 1/16 to permit sheeting by 1/16 balsa sheet.

When cutting the ribs, please do not overlook the holes for the lead out wire. Also before sheeting top of wing make sure lead out wires, bell crank and 1/16 wire to elevator are assembled into wing and that all moves freely.

The wing tips are made from solid sheet balsa, rounded to proper contours. The bell crank should be mounted on 1/2 in plywood which is cemented securely between the ribs and onto the 1/16 balsa wing sheeting..." 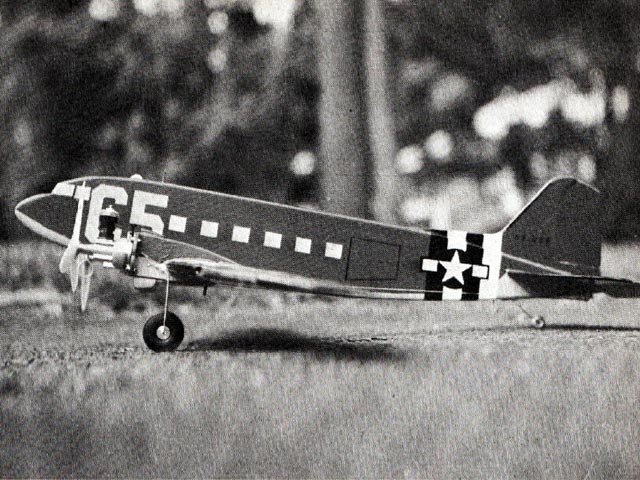