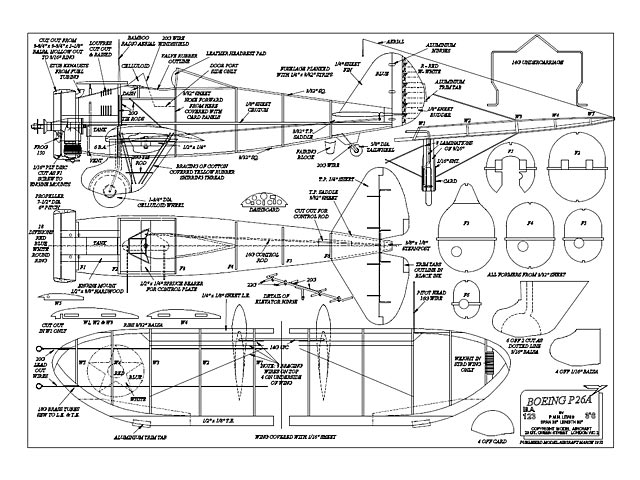 Quote: "The Boeing P-26A was a most attractive low-wing fighter used between 1933-1936 by a number of Pursuit Groups of the US Army Air Corps. Span was 28 ft and the engine was a 600 hp Pratt and Whitney 9 cylinder Wasp R-1340-27. The machine reached a top speed of 234 mph, and the construction was of metal with stressed skin. The aircraft makes up into a very colourful scale model of simple, yet strong, construction.

Fuselage: Start by transferring the outline of the fuselage crutch from the plan view on to a sheet of 1/8 medium balsa. Drill the engine bearers to suit the engine to be used, and cement them firmly into place in the crutch. Cut the slots at the rear of the crutch to accommodate the control-rod and stern-post, then cut out the formers and cement them above and below the crutch as indicated. Cement the stern-post into place, and fit the tailplane saddles at this stage; 3/32 sq stringers are next fitted into the slots in the formers at top and bottom. together with those between formers 2 and 3, either side of tiie cockpit.

Tailplane and fin are cut from 1/4 in soft sheet, sanded to streamlined section and cemented in position. The elevator hinge is formed from 20-gauge wire as shown, and the horn bound and soldered to it together with the two inner probgs. The unit is secured to the tailplane by four wire eyes, whose prongs are pressed into the sheet balsa.

The upper half of the fuselage is now planked, the cockpit being cut out when this is completed. Next shape the undercarriage wire, and sew and cement it firmly on the front of F2. The control plate is bolted so that it pivots freely on it hardwood support, which in turn is cemented between the strips between F2 and F3. At this stage fit the push rod and leadout wires...." 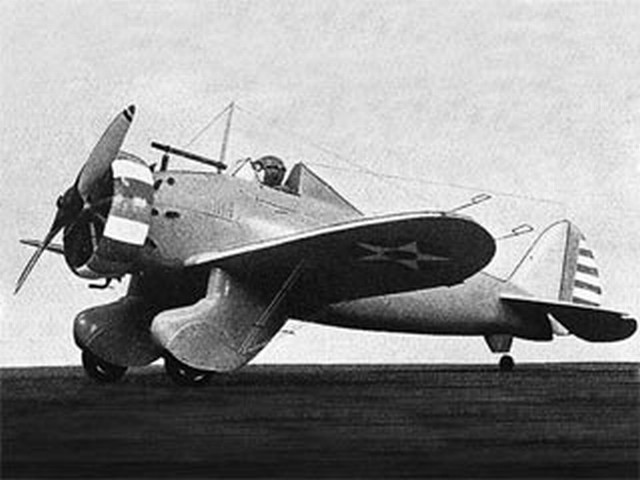