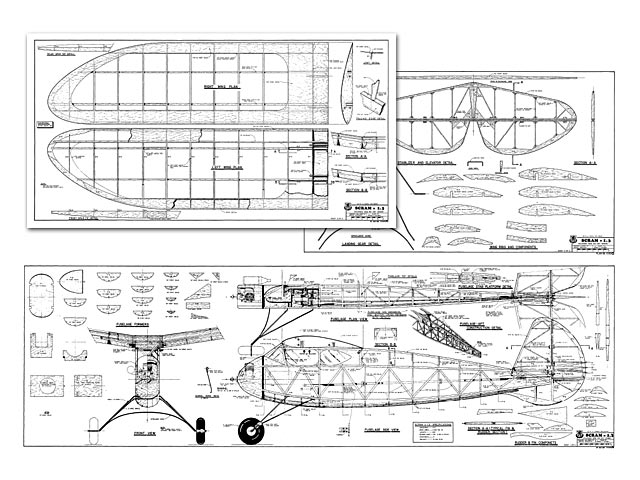 The Scram (oz2578) was originally designed by Ray Heit and published in the July 1938 Flying Aces. It had an 83in span, weighed only 3lbs and placed 8th in the 1937 US Nationals limited engine run event. This here is a later version, enlarged and adapted for RC assist.

Quote: "Lately it seems that there is an increasing spread of nostalgia through the group of the older (or should I say more mature?) modelers almost worldwide. This may be due to real nostalgia, or the fact that these vintage type models really are relaxing to fly and, consequently, are perfect trainers and confidence builders; or just that they are great models to take out on a balmy afternoon or evening. I really cannot say, but I did enjoy the hours of flying and thermalizing that I did last season with a Majestic Major (1.4 x junior 60) powered by a Merco .61 2-stroke engine.

This is very economical flying since most of the time the engine is doing little more than idle. 25-30 minutes on a 6 oz tank is quite usual, and with the big Merco silencer, very quiet too. However, I think I got hooked on flying this vintage model as a refreshing change from scale - not as an alternative, but as an adjunct - so that I can fly and relax sometimes.

My local flying field is in Windsor Great Park, you can see Windsor Castle from the take-off area. I'm privileged to be a member of the association permitted to fly there. It really is a splendid flying site, with a very large mown grass take-off area, maintained by the park authorities. Due to the entire area being quite open to the general public and to comply with the United Kingdom CAA regulations, models weighing over 11 lbs are not permitted to be flown there. However, I like large models, so I build them light. The large Scram weighs 8 lb 6 oz ready to fly, with a Merco .61 2-stroke. Of course it's a natural for a .60 4-stroke engine or even a vintage engine like a Super Cyclone or similar. It has around 10 square feet of wing area, so is a real floater.

I spent some time trying to decide what to build - I needed a model pleasing to the eye, mine at least (beauty is in the eye of the beholder) and with a good pedigree. (Scram was designed by Ray Heit and appeared in the July 1938 Flying Aces, had an 83in span, weighed only 3 lbs, and placed 8th in the 1937 US Nationals' Limited Engine Run event.) It also needed to be acceptable for the UK SAM 35 competitions (we are allowed to scale-up for radio assist). Anyway, I liked the model, and proceeded to acquire a set of drawings from John Pond, who is the main source of vintage drawings in the USA, and drew them up 1.3 x size.

Inevitably some changes were made to the structure, but nothing that affects the model's image or character. For example, the trailing edge of the wing was originally solid, and I introduced some vertical struts between the diagonals of the fuselage sides, as the distance between them was too great to be unsupported. I elected to split the wing in the center, as in my view, this is the lighter and more conventional way to go. Of course, some changes were made to the tailplane and the rudder to provide movable control surfaces.

If you think you would enjoy some really relaxed calm weather flying, being able to take off, gain height, search around for a thermal or two, then bring the model in to land and taxi back to base, then this is for you! Let us begin with the fuselage.

Construction. Fuselage: This, in line with most vintage models, is a very conventional box structure which needs little comment. Do not omit the 1/16 balsa gussets at the top of the rear spacers since these add considerable rigidity to an otherwise flexible structure, as do the diagonal braces. You can refer to the photographs if you are in doubt. Do not omit the wire tension links from the front wing band dowel down to the ply former F-15, as these transfer the lift loads down to the main structure..." 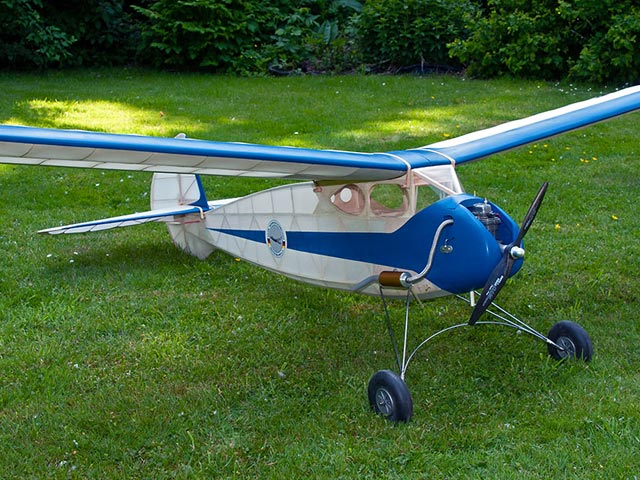