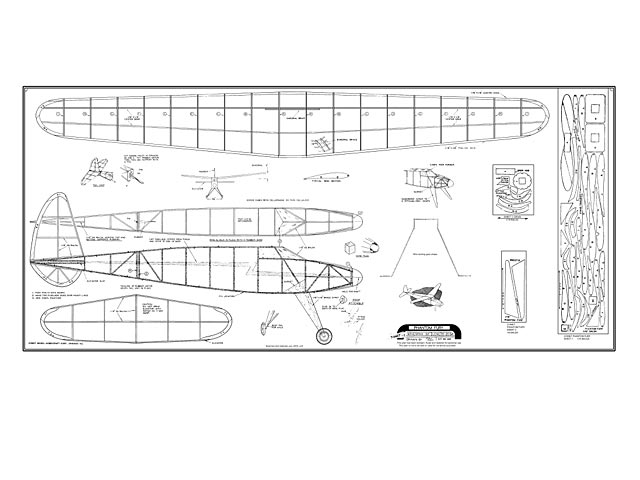 High wing cabin rubber powered duration model. 32in wingspan. Comet Kit no 3207. Padmonkey mailed in to say "the Comet Phantom Fury is not all formers complete. In the process of constructing this fine airplane I noticed no nose formers at all in the included print wood. I do not have an original kit however I can attempt to transpose the requisite formers and send them in for inclusion".

Update 03/07/2014: Replaced this plan with a copy that includes full printwood, thanks to pd1.

Quote: "Hi Steve, I saw that the printwood was incomplete for the Comet Phantom Fury. I scanned the printwood, all three sheets."

Quote: "Hi Steve, There was some talk on a thread that the wings didn't line up correctly. I don't know if you want this but I redrew the wings and stabilizer and joined the wings for the Phantom Fury. Here's the new plan." 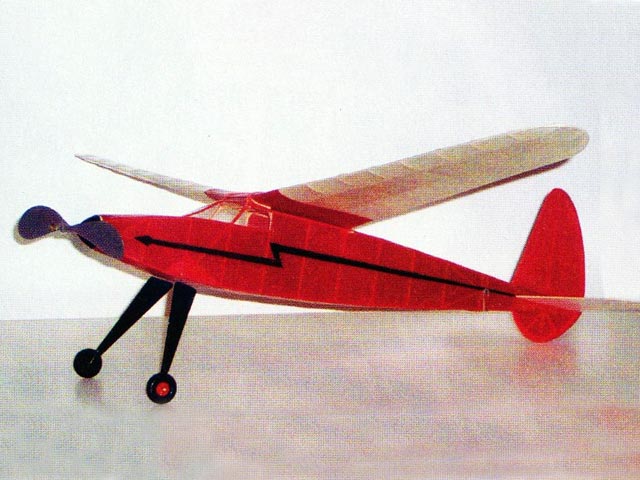 This was my Winter project last year after being given an ancient Comet kit. It was small enough to use the Upstairs Aircraft Assembly Area instead of the chilly basement. The fuselage wood was very heavy but also strong and it worked out well, tail feathers were another matter, plans warned against shrinking the covering but I didn't listen. When I shrunk the Doculam covering, the stab warped like a potato chip. I ended up building another with lighter but larger wood including diagonal braces, both lighter and stronger. I added another spar to the top of the wing for added stiffness, no problem with warps. The plans called for a removable tail section which I left out as too much trouble with no advantage. Comet expected you to build up a 6" prop from 1/8" printwood but I substituted a carved balsa version of 8" instead. My kit came with a 6" plastic prop but it was too small. The balsa landing gear design is weak, I had to brace it better to survive the first landings. While the model did fly well, my two loops of 1/8" rubber didn't provide enough power, plan is to add more rubber and maybe a larger prop for better performance. If I build another, I'll use 3/32" balsa instead of 1/16" and go with lighter wood, stronger and lighter.
DougSmith - 03/08/2015
I have built 2 of these models - one in the USA in 1988 when the kit was actually still for sale in Two Rivers Wisconsin, and another a few years later when I returned home to NZ with the plan in my luggage. I found this model to be a real floater and had many really good thermal flights with it. I was worried about the U/C and so on the first one I built it on a separate plate inset into the fuselage and rubber banded on. In practice it never moved so I built the second one as drawn. It always touched down like a feather so I had no issues. I did put diagonal bracing on the tailplane however. To prevent warps you need to ensure that the stresses on both sides of the tailplane are equal. This means both sides covering at the same tension and orientation, same water shrinking, same doping. Pin the tissue down flat, put your adhesive on the frame and offer it up to the tissue keeping the grain perfectly parallel to the lengthwise axis. Then remove it and do the same on the other side. Water shrink by spraying lightly with an airbrush and weight down at least 1/8 off the board to dry. Same process for a couple of thinned coats of non-shrink dope. You can also pin your tissue down and pre-shrink it to tame it a bit before putting it on the frame. Perfect joints also help avoid warps - filling crappy joints with glue is asking for trouble as the glue shrinks and pulls the structure. In both cases I carved an 8in prop though looking back a 9 or 10 would be even better. 4 strands of 1/8 braided was fine for calm weather flying.
MikeMulholland - 07/09/2015
You’ve always wanted a model of one of those classic Italian tri-motor aircraft, right? So here it is, the Savoia Marchetti SM82 hidden inside an old Comet Phantom Fury (oz84) kit box. Rescued this old Comet kit from a flood some years ago...box in bad shape, stripwood gone I-don't-know-where, but plans and printwood in good shape (as kits go). Might have tossed it all as a lost cause. So I'm looking at it and thinking...I've always felt that the finish is what really makes a model. Maybe with a little imagination I can create something unusual from this old kit, lower things to near mid-wing, add a couple of lightly-built non-functional wing-mounted engine nacelles, and a WW2 Italian finish...y moto presto...an ersatz vintage tri-motor transport [pics 004-008]. I'm working on the theory that a cube can be made to look like a leopard...with a myriad of spots and bad eyesight. This is kit-bashing. Prop is 9.5” dia. Wing utilizes 2” of dihedral as measured at the tips. This model is virtually a powered glider with lots of wing. Beware of warps…get it right and she soars.
All the best to Steve and Mary at OuterZone!
Neal Green - 02/09/2020
@ Neal Green
Now this is some seriously creative model building. What a great story! And the result looks stunning.
Martin - 03/09/2020
Add a comment