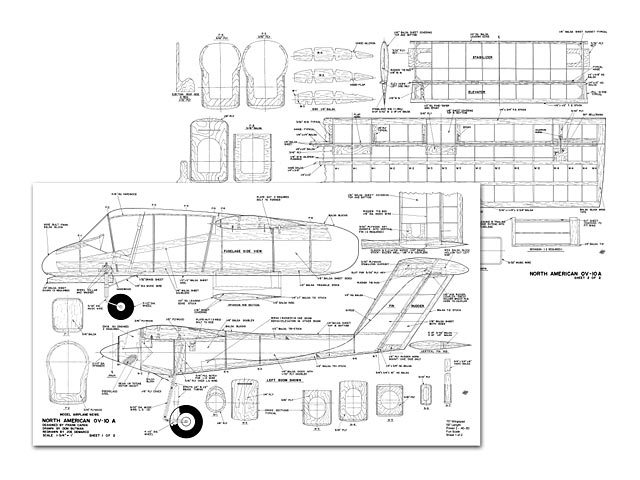 Quote: "I have been and probably always be a scale bug. and I'm sure that all of us watch with interest when we see scale models at the field, because the name of the game is to make like the real ones. There is nothing like the realism in watching a scale model perform well in the air. Look around at all the cameras when someone brings a scale job out. With the '67 Nats coming up in the Los Angeles area I started looking for a different sort of twin engine plane I could model. I started at the Douglas A-20, the North American B-25 and a few others and then decided since the North American plant was in this area I should concentrate on something of theirs. This is how the COIN Fighter came about. It looked interesting enough and perhaps I might be able to over-whelm some of the judges and be able to place in the money, so to speak.

I make no attempt to construct any of my scale RC models exactly like the real one. All I want is to have my model look like the real one The important thing is to have the model fly, and fly as well as possible. I don't have much use for a scale model that flops all over the sky or is maybe not even able to ROG because of so much weight and lack of power. There is no reason for this. It should be built strong enough and with enough power to do the job. I think the '67 Nats proved that just about any scale model would fly. Even with reeds, yet.

When you first look at the layout of the Bronco, you wonder if it actually is something you could fly without any wild aerodynamic problems. Noting the three-views and the scale control surfaces, especially the ailerons, you begin to wonder. But I decided to go scale all the way and unless I figured the scale wrong, it is exactly as the factory plans, which I obtained straight from the Columbus division of North American Aviation.

I decided on a scale of 1-3/4 inches to the foot and it comes out about 70 inch span. Originally, I started to build 2 inch to the foot, but I couldn't afford all the balsa. It also happened to be the short wing version which they changed to a longer wing, bringing the span on the original to forty feet instead of thirty feet. It would have really been a monster at 2 inches to the foot and this is why I went to 1-3/4 inch scale. Maybe I should have stayed at 2 inch, though. It would have been much easier to figure out even numbers. Never again!

I started construction in January '67 and finished on the Saturday before the Nats. Luckily I didn't need traveling time or I really would have been in trouble. I used the combination tank mounts for the Enya 60's, figuring on a neat installation, until one broke at the plastic cap end. What a feeling to be fueling up on the day of qualifying and watch fuel run out of the wheel well and down the strut! All that work and I'm washed up before I start!

Fortunately, with the aid of some friends, we scrounged up an 8 oz. fuel tank, some hose and some wire to build the throttle push rods that I had so conveniently left at home, carefully marked right and left. You see, I actually didn't want to fly the beast because I'm really a coward. But these so-called friends of mine gave me so much help that I was forced to make the field repairs and then - the moment of truth. The darn radio worked (it always does), both engines started and ran like dreams and there really was no way out because, as they say, all systems were go - except me, of course. I taxied out and lined up on the runway, advanced the throttles, and took off.

Now there are some who say this was the first flight and in a sense this is true. You see, it was the first flight with all the cockpit detail and entire ship painted, but it wasn't actually the maiden flight. I really don't think the Nats is the place to test a scale job. Besides, I wasn't too sure those little ailerons would really work. So, being not only a coward, but also a little lazy, I couldn't see any sense in completely finishing this thing not even knowing if it would fly. I decided to clear dope, silk, and seal the ship, install the equipment, cardboard up the entire cockpit, and go out and see if the beast would actually fly. Would you believe the only thing I had to do was to trim in a little down elevator? This ship is one of the easiest flying models I have ever had. The flaps work beautifully. You can really four point it too..." 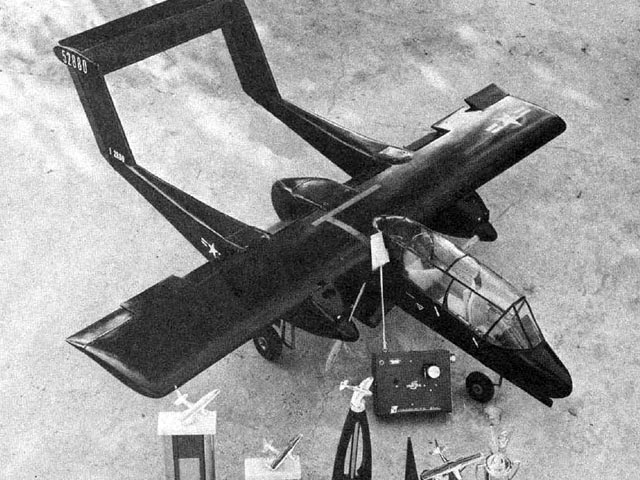 For a long time I wanted to build this model and I did not have the plans, fortunately I found it on this page, thanks
Julian paez - 26/09/2020
I really want to build this... do you think two OSmx 40LAs would do the job?
Tom - 15/09/2021
Two .40 would not be a good idea. It was designed for two .60. Try and stay around that size as you can always throttle back.
Mark Godfrey - 24/10/2021
I have flown an OV-10, built by a club member, and while it flew well, it was heavy and had a very small wing, interrupted by the two engine nacelles. It was damaged in the infamous downwind turn, but is repairable. You gotta keep the speed up, especially in a turn. The engines mentioned, OS LA 40's, while good running engines, are not known for their power. They would not be my choice. The same can be said for the ENYA 60 from that era. It's what Phil Kraft preferred in his original Ugly Sticks. I had an Enya 60, and while good running, it was no powerhouse either. I'm now flying an OS 46, which will happily pull an 11x6 prop, probably as fast as the Enya pulled its 11x7. The OS 46 is what I would use, very reliable and more power than any of the engines flown on my ancient Miss Martha. Weight will be very close to the original Enya, used without mufflers back in the day. You would be amazed how much power the OS 46's will put out, just keep the speed up and you'll be fine.
Doug Smith - 24/10/2021
great article, new to building, can the plans be enlarged to a larger scale kinda like the Hangar 9 OV-10? I figure the gear and motors are figured out already.
Tom Stark - 22/01/2022
Hi Tom... almost all plans can be enlarged (up to a point) without modification, and this varies, depending on the plan. Also, enlarging the plan throws out the engine recomendations made by Doug. Best to keep plan as is.
Tom, you mention you are new to building. If so, I don't think this would make a good first building project, or even a second one. Also... are you an experienced flier? Do you at least have a few high performane ARF's under your belt? Building and flying a scale twin (with glow engines) is right up there in the echelon of R/C modeling. You'd better be a very experienced builder and flyer if you expect to succeed. Nothing personal; of course, I don't know you, but there is something about your questions which makes me feel like you may be a little bit over your head on this one.
RC Yeager - 23/01/2022
Add a comment