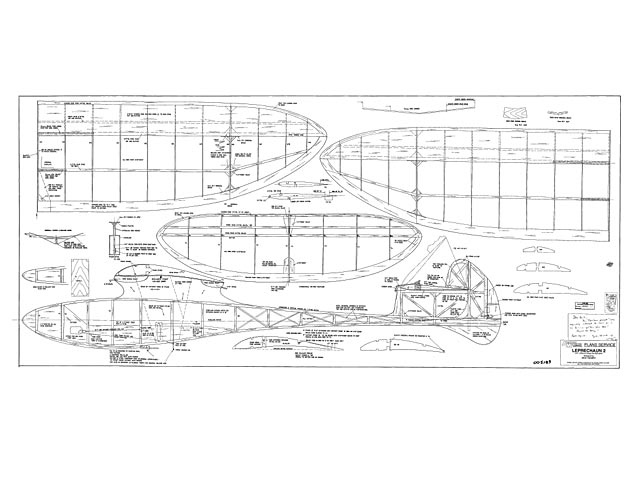 When AeroModeller published the plans for the mighty 103in span Leprechaun (oz3252) in March 1950, they began the birth of a legend: for the next couple of decades its sheer size was inspirational to many, and it was indeed a dream to fly. Nothing else, it seemed, came close - for not only was the span greater than almost anything else in the then-revered Plans Handbook, the low aspect ratio and long fuselage meant that it dwarfed lesser designs.

And yet, this was NOT the original Leprechaun: that honour fell to a model just one third the size of the published design, while Leprechaun Two as presented here, was designed in 1949 as a twice-sized version of the original, giving a much more manageable size. After all, at the time the big Leprechaun was built, Dick Twomey was an 18-year old schoolboy, and his transport was simply a bicycle, though he did later graduate to a Fiat 2-seater. Still not the best way to transport the big 'un!

Incidentally, there were five different 'Leps' in total: in addition to those already mentioned; there was a one-and-a-half and a two-and-a-half times version designed between June and September 1949. Leprechaun Two has a similar wingspan to an A/2 glider of that period, but with its 6:1 aspect ratio, a lot more wing area!

Events like National Service in the RAF conspired to pigeonhole large model aeroplane flying, though Dick continued to fly smaller models. While a fifty year wait between design and publication may seem a little excessive, at least you can build one safe in the knowledge that it is proven. And that the Society of Antique Modellers (SAM 1066) confirm that it is eligible to compete in their Vintage flying events. There's even a Leprechaun Trophy to be competed for at their European Championships, which take place at Middle Wallop in Hampshire over the 20-22 August '99.

You'll find it well-sized, the longest part is the 57 in long fuselage which fits in the boot or across the back seat of most cars. The two-piece low aspect-ratio wings are even less of a problem to stow.

Now based in Mauritius, Dick is a frequent visitor to the UK, and built the example illustrated here during January this year in his Southsea flat, without the benefits of a modeller's workshop at his disposal. It's a simple design, and only basic tools are required. Dick takes over the story:

Although this aircraft takes a fair amount of balsa, the cost is not excessive even at today's prices. Visiting Flitehook, I parted with around £25 for the Lep's balsa and ply, and perhaps another £7 for wire and heavyweight tissue. Add a D/T timer (please!) and you've some idea of the material costs, up to the doping and finishing stage.

Having bought the goods, the next requirement was a large-ish, flat, building surface - and I don't recommend the floor! I laid a 6 x 3 ft sheet of 3/8 in softboard on top of a wallpapering table, supporting the table's sagging middle with model boxes, etc. You do need to spend some time levelling the whole thing, as you don't want a long bent fuselage, and the wings once built will not twist. I aimed to build flat, but found a little washout in one wingtip, which made the decision as to which way it would circle!

Fuselage, fin and tailplane: The basic fuselage is simple to build, although it is of course necessary to splice some 1/4 in strips together to form the longerons. Where there is a tight curvature eg at the nose, split the strip longitudinally and re-cement in position. Add the geodetic strips before lifting the sides from the board, they help to keep the decolage (wing/tail incidence difference) correct, and will also help later to resist any tail-twist. Put the two sides together, inserting the spacers, square-up and then cement the top and bottom geodetics in position.

Adding the pylon, which is laminated above the fuselage top, is straightforward. Check carefully that the incidence is correct.

When making the fin and rudder, keep checking that everything in the 'vertical' is aligned. The forward top fin is attached to the tailplane, and for ease of transport I hinged mine to fold sideways when out of the flight regime. The folding fin is kept lined up with the tear fm by gluing a tiny piece of celluloid on the hinge-side of the fixed fin. The tailplane is easy and of symmetrical section, as on all Leprechauns. Nick the trailing edge slightly off-centre to allow the D/T line to pass beside the tailplane-attached top fin.

Wings: There are only 24 ribs, so cutting them out is not laborious. Start the construction by fixing one main panel's leading and trailing edge to the board, supporting the ribs and trailing edge as indicated on the plan. This will maintain the profile of the Isacson (mod Twomey) wing section. When inserting the top spars, allow for the leading edge sheeting, which will be put on later. Angle Rib 1 and Rib 8 to match the dihedral. When the glue for the top spars is fully set, lift the wing panel from the board and add the lower spars, again allowing for the later sheeting.

Now build the matching tip panel, splitting and re-cementing the LE to achieve the curvature. When complete (top and bottom) mate the tip panel to the main panel at the tip dihedral angle, and strengthen the joint with the rib fillets and ply dihedral keepers.

After bringing the other wing to the same stage, and again before adding the sheeting which forms the leading-edge box, it's time to place the port and starboard together and fit the wing joiner wires brass tubes. Do this with the joining wires inside, or my cousin Murphy will ensure that the two halves do not mate!

With main panels again flat on the board, add the leading edge sheeting to the top surface. When set, lift - but before sheeting the undersurface it is advisable to form, bind and cement the wire attachments for the bracing wire at the Rib 8 (tip dihedral break) position. It is difficult to do the binding (I use a strong thread/light towline) when all the sheeting is already in position. Then fix the lower sheeting last, then polish-up the aerofoil profile by sanding the leading edge as necessary.

D/T and Autorudder: My system is only one of a series of options, so by all means use your own preferred methods for timer release, and operation of rudder and dethermaliser. None of these were fitted to the original Leprechauns anyway, but are of course permitted under Vintage rules now. To guide ther'control lines at fuselage entry and exit points, I've found R/C plastic tubing ideal, and on this size of model R/C rudder horns are also not out of place.

Finishing: I used the modem equivalent of Heavy Modelspan, and needed five sheets (30 x 20 in) for the wings, one for the tailplane and two for the fuselage and fin.

Approximately two and a half ounces of nose-weight will bring the balance point to the planned position and the total weight to approximately 2 lbs, then you can get trimming. If you want to'go back-a bit in time' try a model like this on the 250 ft towline permitted by the BMFA, or the even longer 328 ft used by SAM 1066. It's another world!" 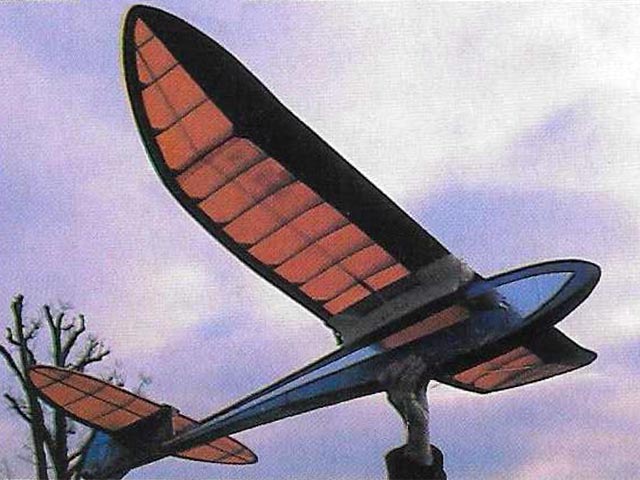 Where is the fuselage top view?
David Wartel - 04/11/2019
I think it's safe to say there never was a top view. The plan certainly says on it (next to S8): "Fuselage outside width 2=1/2 in between frames S4 and S8" which gives us a useful starting point, and I guess we are expected to work out the rest for ourselves. Back from there to the tail, it is a tapered box, essentially. I doubt anything inbetween S8 and the tail is at all critical.
SteveWMD - 04/11/2019
Tip ribs and profile warrant care. W8 is short and notches are wrong. Profile of tip is tapered in both spars so from w9 to tip, it's tapering top and bottom. Don't build flat to board. Ribs need care to check they have been cut to accept 1/16 sheet. Belairs are wrong. Fuselage tapers in anyway you see fit.
Adam Chambers - 07/09/2020
Pls inf if I can get this kit? ths coop
Enrique Pallarés - 13/09/2020
I don't think this was ever kitted, being a magazine plan. But maybe there is someone does a laser-cut short kit nowadays?
SteveWMD - 13/09/2020
Hi Steve, Belair Kits have short kits for both the 103" and 67" versions. Best regards!
Chris Pinn - 13/09/2020
Hi Steve and Mary, Dane RC from Denmark produced also Leprechaun Kits, Leprechaun Vers. II Kit with 2665mm Span and 2165mm Lenght (light + full Building Kit). The other Leprechaun Vers. XL Kit has 4120 mm Span (with Ailerons) and 2165mm lenght. E-Motor + XL-Wing Update Kits for the Lepechaun Glider are also available. More Information for Leprechaun Fans can be found on the Website: https://www.dane-rc.dk/
Kind regards and best Wishes from Berlin Germany :-)
Axel-VPF - 16/09/2020
Add a comment