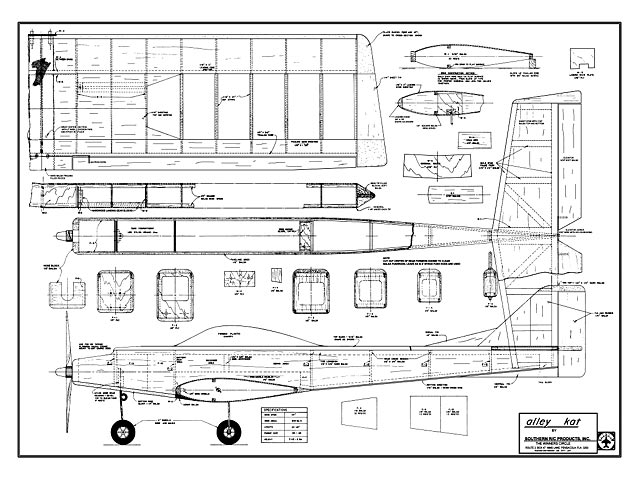 The Alley Kat is a sport pattern aircraft manufactured by Southern R/C Products Inc, of Pensacola, Florida. It was designed by Ed Keck.

This kit features excellent plans. Also extreme care has been taken to select the highest quality of balsa with matching wood of equal weight and density used for the ailerons, fuselage sides, etc. The machine parts fit exceptionally well to corresponding parts as well as to the plans. Most bulkheads, doublers, etc are shown on the plans. There is also a complete materials list included with the instructions.

The only modifications we made was to add 1/16 in balsa vertical grain spar webs in the wing and to add a removable tank hatch on the bottom of the fuselage for easier access to the fuel tank.

The fuselage and vertical fin were covered with a 'tomato soup' red with the wing and horizontal stabilizer covered in white. Red was used for the leading edge on the wing. Both an iron and a heat gun was used in covering. This material conforms very well to the contours and really sticks at the edges and seams. DJ's 1/4 in black and 1/16 in white striping tape were used for the final trim.

The canopy was trimmed to size and formed to match the contour of the fuselage where it is located. Before gluing the canopy in place, a piece of black adhesive shelf paper was cut to size and located under the canopy to serve as a base. The canopy was then glued in place using Goldberg Jet cyanoacrylate cement.

Next, the engine, muffler, fuel tank, and radio were all installed and the balanced checked. Approximately 2-1/2 ounces of weight was needed in the nose area to make it balance at the point shown on the plans.

With regards to flight performance, gound handling is excellent and on take-offs the model rolls about 25-30 yards and then goes up at a very fast rate. Our model required only slight trim correction on the first flights but we did add more rudder and elevator throw on subsequent flights.

The model is very responsive to the controls and performs all the basic maneuvers with ease. It performs very well at slow speeds and control response is still very effective. This makes landing a pleasure. Once on the ground, it has no ballooning ten-dency and sticks to the landing strip as if it were glued.

The K & B .40 with Perry carburetor provides plenty of power for this aircraft and really makes it move out at full throttle. The muffler used was a Slim Line Sport Scale II with dual pipes and a pressure take-off. In fitting the muffler to our aircraft we found it necessary to move the pressure take-off to a new location where it would not interfere with the fuselage. This muffler mounted easily and looked extremely neat on our model but was a bit loud for our flying field. A standard Slim Line muffler was later installed in our model and was found to be much quieter.

The Alley Kat is a pleasure to fly either as a sport stunt aircraft or as a contender for A and B Pattern events." 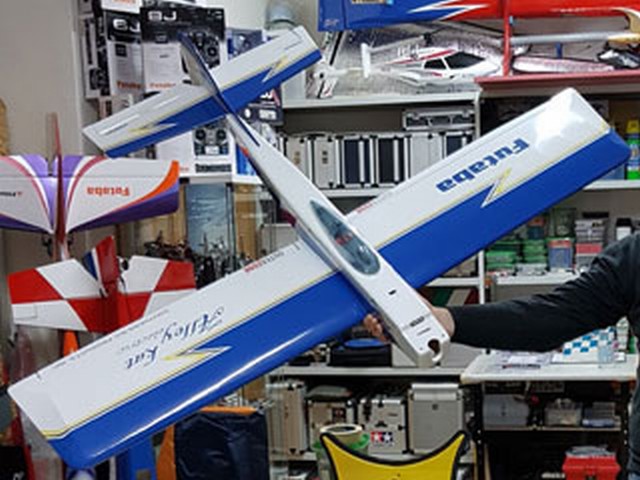 Hello! I'm an Italian aeromodeller, f3a pilot - built are my passion. I am 43 and started my passion from early 1987. At starting my model was control line, next rc. I present you my rc vintage ALLEY KAT, downloaded from Outerzone [model photo & more pics 003-008]. Very nice model, flying very good. Weight 1400Kg. without battery. Battery 3s 3300 and weight 274Gr. Radio Futaba 8j. Coming soon another pic from airfield of the first fly - great success!!!!! Thanks OUTERZONE for the opportunity - great job!!!!! Have nice fly and happy landing from Naples!!!!
ArmandoValentino - 19/05/2017
Hello Mary! Thanks for pictures published, a very great pleasure for me. Now other pics of my Alley Kat on airfield! [more pics 010-014]
ArmandoValentino - 19/05/2017
Add a comment