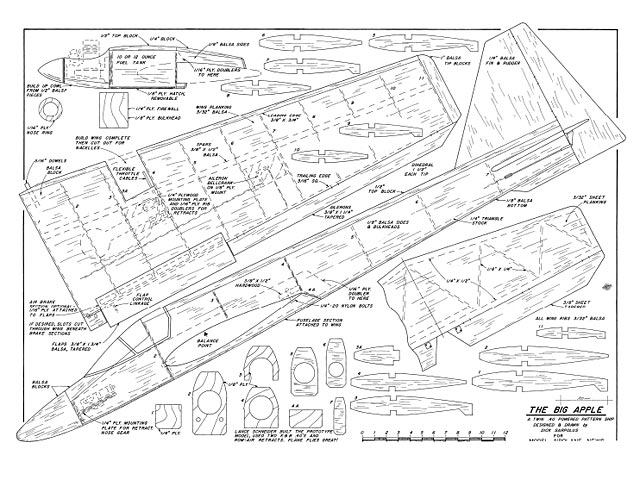 Quote: "Twin .40s give this sleek bird all the pattern performance any flier could wish for - and it's legal in competition! IN THE QUEST for better flying performance, R/C pattern aircraft have been growing larger and heavier. All the power available from today's piped Schnuerle .60 engines is necessary for these larger aircraft. It has been more than a few years now since our AMA pattern rules were changed to permit the use of twin .40 engines; single engines are still limited to .61 maximum. Presumably, this was intended to encourage variety in aircraft design, but that certainly hasn't been the result. I'm not aware of any serious pattern competitor using twin .40s. Why not? I would think that two good .40s could fly a larger aircraft than any single .60 could. Of course, the FAI limit is still .61, so fliers with the FAl team in their future plans are stuck with single-engined aircraft; that stitl leaves plenty of AMA competition.

Why haven't twin .40 powered, pattern aircraft shown up in competition? Because of engine reliability? Engines are so good today that their reliability shouldn't be a serious concern. I have been flying a twin .40 ship for the past two seasons and can recall only once that an engine stopped prematurely; and this particular aircraft can roll and loop, turn right or left, and land safely on one engine. Good .40s are available with the same desirable features as any pattern .60 - Schnuerle porting, excellent carburetors, rear exhaust if appropriate, tuned pipes, etc. The power is there.

Is aircraft design a problem? Dave Platt's pattern twin, the Duellist (oz5692) has been available in kit form or MAN plans for scratch-builders. An earlier .40 twin of mine, the Magnum 80, has been published. The overall aircraft design considerations are certainly the same for twin or singie engine power; the maneuvers to be flow are still the same..." 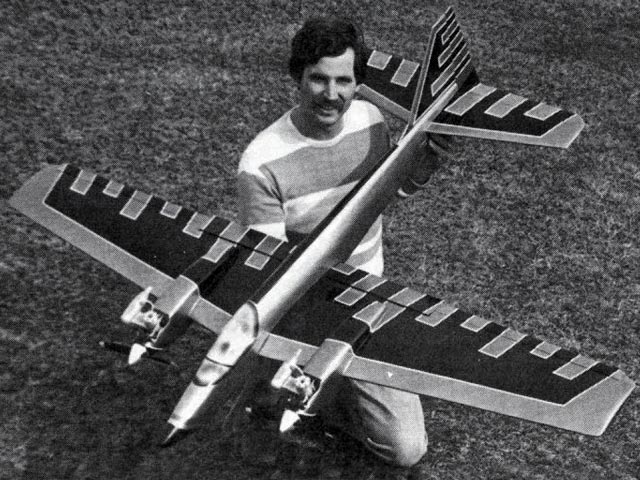 Hello. I attach three photos of 'The Big Apple" oz 8368 which I completed not too long ago [more pics 003-005]. The plane is a fantastic flier and will easily fly on one motor. Mine has individual aileron servos, the flap with airbrake function, individual throttle servos (shoehorned into the nacelles), electric retracts and is powered by two Evolution .36 glow motors. Regards, Torsten, Cape Town, South Africa.
Torsten - 30/12/2019
Add a comment