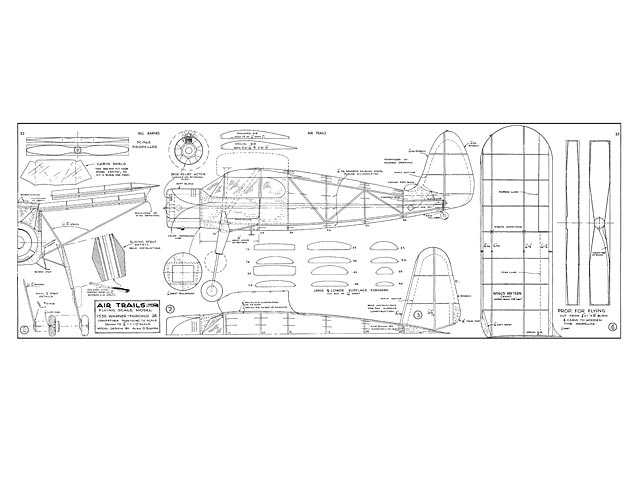 Quote: "Among pilots' favorite light planes is this old reliable, newly im proved and slicked up for 1936, and offered in a clever convertible flying and scale-model version. Fairchild 24, by Alan D Booton.

THREE years of development have advanced the Fair-child 24 to a position as one of America's foremost light planes. The I call model has a pleasing new symmetry and many improvements, such as the smooth NACA cowling that fairs over the Warner engine, cleaner landing gear with more oleo travel, and generally greater strength. The cantilever stabilizer omits tail wires, which goes to make a better scale and flying model. Improved aileron and flap design, along with the new trim tabs, make the Fairchild even more maneuverable than last year's model.

Versatility has been carried out in the design of our model to the extent that it may be used as a flying model or, in three operations, changed to a scale model to place on display. Note while studying the drawings that the landing gear struts can be adjusted to scale or lengthened to flying model proportions, that the tail surfaces for scale are removable to make Nvay for larger flying surfaces, and finally that the scale prop is just as easily replaced with a fine flying prop.

FUSELAGE:Place waxed paper over the drawing. Build two sides of the fuselage by cutting pieces to fit the ones on the side view of the model. Use plenty of pins to hold the parts, but do not push pins through the material. Note that the 1/16 special ribs are part of the fuselage frame. Use only model airplane cement to assemble with, unless you wish to get into difficulties.

To assemble the two sides, cement the tail posts together and hold with a paper clip while the succeeding formers to the front arc cemented in place as per drawings. Scraps of balsa with notches cut to the former widths will help to hold the sides against the formers and keep the cross section squared up. When the front is reached, note that former 2t is slanted to the windshield angle and that 1/16 square spacers are used at
the very front, instead of formers. It was necessary to do this so the round bulkhead could be attached more accurately after the formers have dried.

Cover the sides of the fuselage with 1/32 sheet balsa back to #3 upright and on the bottom to #2b former. Leave a surplus of the 1/32 sheet on the space under the windshield, in order that the accurate outline be cut according to the top view..." 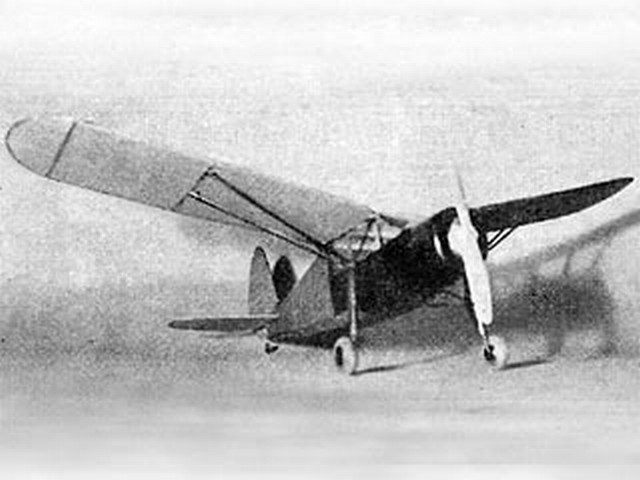