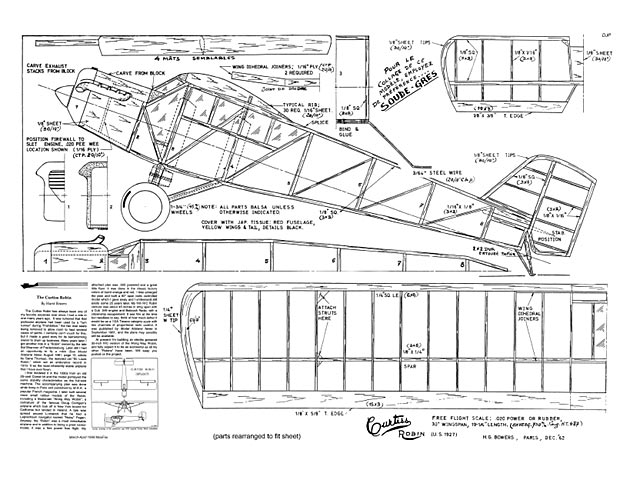 Originally published in MRA circa 1962, this here is a later reprint from March-April 1998 MaxFax.

Quote: "The Curtiss Robin By Hurst Bowers. The Curtiss Robin has always been one of my favorite airplanes ever since I had a ride in one many years ago. It was rumored that that particular airplane had been used by a 'rum runner' during prohibition, the two rear seats being removed to allow room to haul several cases of spirits. I certainly can't vouch for this, but it made a good story for its barnstorming owner to drum up business. Many years later I got another ride in a Robin owned by the late Sid Shannon of Fredericksburg. Later still I had an opportunity to fly a robin (See Model Airplane News, August 1981, page 15, article by Gene Thomas), the restored old 'St Louis Robin,' which set an endurance record in 1919. It was the most inherently stable airplane that I have ever flown.

I first modeled it in the 1930s from an old 25-cent Comet Curtiss Robin (oz98) kit and the model portrayed the same stability characteristics as the full-size machine. The accompanying plan was done while living in Paris and published by MRA, a popular French magazine. I later built several more small rubber models of the Robin, including a Bostonian 'Wong Way Wobin'; a caricature of the famous Doug Corrigan's airplane which took off in New York bound for California but landed in Ireland. A tale was spread around Limerick that he had a Leprechaun navigator named 'Nutsy' Fagan. Anyway, the Robin was a most remarkable airplane and in addition to being a great rubber model, it was a fine power free flight.

My attached plan was .020 powered and a great little flyer. It was done in the classic factory colors of burnt orange and red. I later enlarged the plan and built a 60 in span radio controlled model which I gave away and I understand still exists some 25 years later. My first R/C Curtiss Robin (oz39) venture was about 45 inches in wing span with a Cub .049 engine and Babcock Radio, with a citizenship escapement. It was fine at the time but needless to say, think of how much better it would be as a 1/2A Texaco category scale with two channels of proportional radio control. It was published by Model Airplane News in September 1961, and the plans may possibly still be available.

At present I'm building an electric powered 35 inch R/C version of the Wong Way Wobin, and fully expect it to be as successful as all my other Robins have been..."