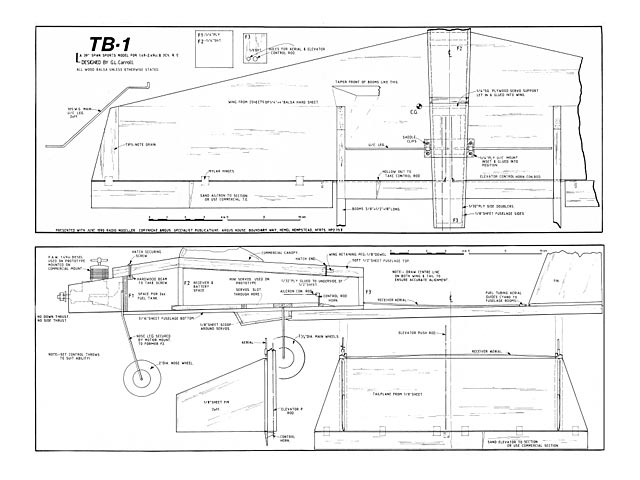 Quote: "Want something cheap to build and cheap to operate? Then try this all-sheet fun machine. TB-1, by GL Carroll.

TB-1 is pleasingly out of the ordinary in looks with Vampire jet type layout. It really has to be just about the quickest model to build we've offered as a full plan.

The TB1 came about at a time when I had no patience for making large models of the built-up variety and so I decided to build an all sheet one. Years ago when I first entered the realms of model aeroplanes all we ever did was buy a few sheets of balsa from the local model shop, glue it all up and then go out and see if it would fly and, to our amazement, some of these models did fly quite well! Of course we didn't have radio gear then but we still had hours of fun with what we nicknamed 'sheeters'.

Let's bash some balsa! Construction is so simple I don't think I need to go into it in great detail - the plan says it all. Start by selecting two sheets of 1/4 x 4 in that is reasonably hard and glue together, mark the centre line on the wing and cut to shape. Construct the fuselage and glue to the top of the wing (top or bottom, they are both the same). Next cut out the tailplane and the two fins. Find the hardest 3/8 x 1/2 strips for the booms or use spruce. Mark the position of the booms on the wing and glue in place after the wing has been covered, but make sure you align and square everything up. Easy isn't it!

Covering: What can I say! Choose your favourite method and get cracking!

Flying: Now if you have read all this first and you are a beginner I'm afraid you will be very disappointed because this model is not for you just yet. However, for someone who has flown on ailerons it's a dream to fly, has no bad manners and the stall is non-existent. When you slow her up for a landing the only thing to watch out for is that you might run out of elevator so keep some speed up. She will do everything in the book except those manoeuvres that require rudder. The engine I used was a PAW 1.49 which had plenty of power.

I have also seen one powered by an OS 15 - well, let's say it was fast! So if you want something simple that won't break the bank, build yourself a 'sheeter' and let me know how you get on."

Hi Mary and Steve I've attached a copy of the 'TB-1' a 39 in wingspan simple to construct all sheet model from Radio Modeller, June 1990, designed by G. L. Carroll. It looks like I've kept a number of the simple and smallish model plans from that era, and this has to be one of the quickest builds. The article's one paragraph description of airframe assembly / construction highlights the simple construction. Hopefully it will be of interest to Outerzone fans. Best regards, Paul 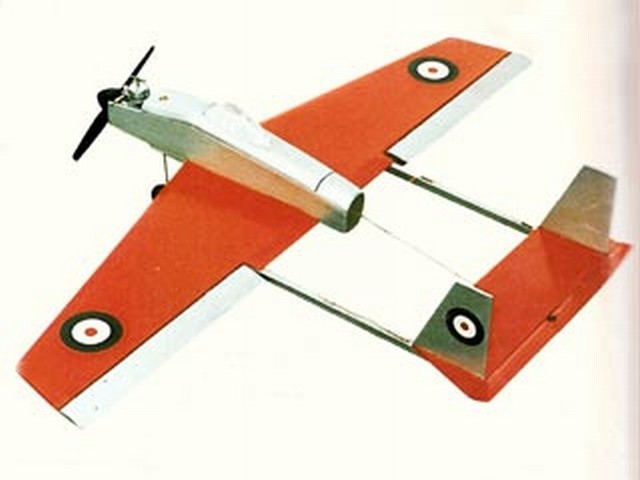