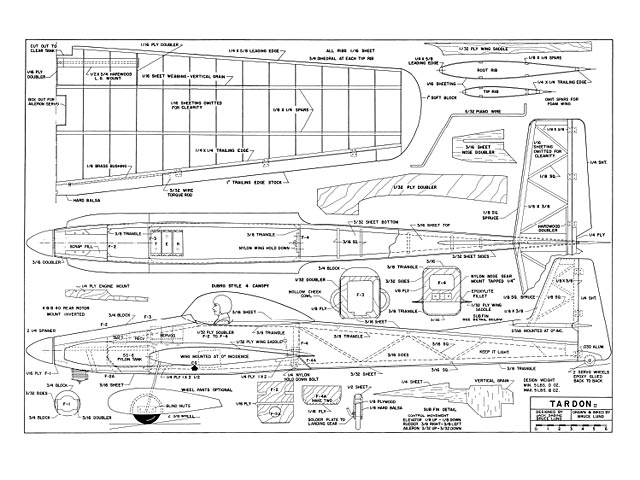 TARDON II WAS conceived at 20.000 feet over Mexico, while Jack Sabine and I were returning from the 1969 Mexican Nationals. Jack had just won the Open Pylon event with his 'Tardon'. In Spanish, Tardon means slow or pokey. Surprisingly, some of the local Mexican contestants had come over to ask what it meant - seems our dictionary was for Castilian, rather than Mexican, Spanish.

Thinking ahead to the Nationals to be held in Philadelphia, we realized that Tardon needed modifications to fit the recently revised AMA rules. Should new wings be built to meet the rule, or should a completely new plane be designed? The frontal area of Pardon could be reduced by placing the cheek cowls down on the wing like a Rivets, and the wing could be moved up closer to the thrust line. We decided to modify the winning Tardon.

The 1969 Nationals were only days away when the redesigned plane was ready for testing. That first flight was all, or perhaps even more than, a modeler could desire. The ship handled like a dream, and no trim changes were necessary. The only problem was with the pilot, who has a habit of dancing or shuffling his feet during a test flight. Jack was a nervous wreck, but the Pardon made a perfect three-point deadstick landing on our 240-ft, strip.

This plane is fantastic. It demonstrated its high speed capability by qualifying at the Nats with a hot 2:06. Yet, with the engine killed it glides in for landing like a sailplane. It shows no tendency to fall off on a wing during low speed turns and, with the limited elevator throw, it will not stall.

When flying full-bore, the stability is phenomenal. It flies the pylon course as though programmed by a computer. One takeoff during the National finals was made totally blind. Jack's mechanic stood up in front of him just as the plane was released. Jack just pulled up and waited until he saw his orange and white bird over the heads of those in front of him.

Tardon II is an easy plane to fly, even for a beginner. Most Class A fliers would have no trouble handling it. It also can be an attractive acrobatic plane - but fast!

Construction: Construction is somewhat more sophisticated and time-consuming than usual, but it is not difficult. The end results are well worth the effort. If possible, total weight should be kept under 5 lb.

Tail: The stabilizer is simple to build, with 1/16 sheet balsa covering a Warren truss frame. Note that spruce spars are used and that the leading edge is quite tapered. The center of the bot-tom sheet is slotted to allow the stabilizer to slip over the sub-fin. When making this assembly, epoxy the joint thoroughly, since quite a bit of flexing takes place here. However, after a year of flying, our Tardon's joint has not failed..." 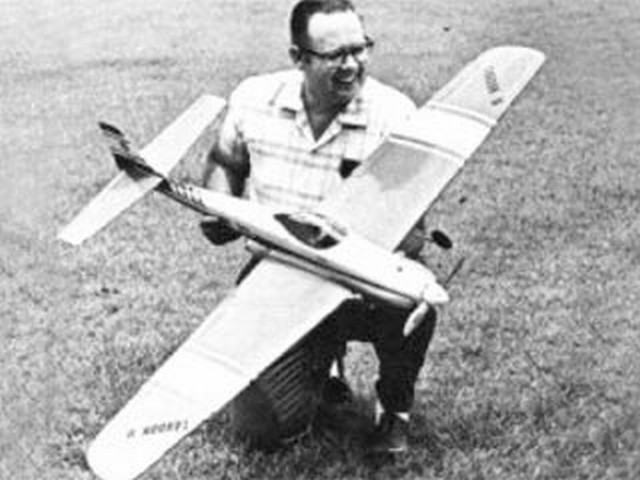