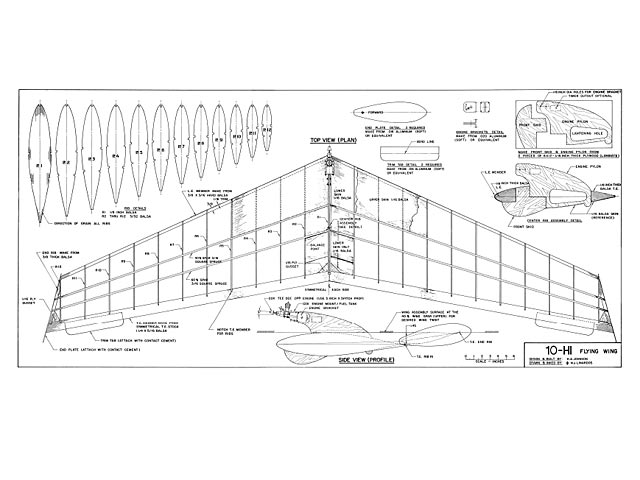 BLAME IT ALL on Nick Linardos, top needler in our small group of modeling enthusiasts who enjoy a busman's holiday away from configuring F-5's, T-38's, etc. During a coffee break session, we were discussing an all-wing contest sponsored by the Northrop Model Airplane Club. Some of the guys were needling Nick about his prospective entry. He neatly diverted them by drawing attention to the fact that, long ago, I had flown Northrop's twin-engine experimental wing, the N9M.

I could sense a trap about to be sprung, and it was: Johnny, why don't you throw something together and enter the contest? After all, you are the only modeler in this gang who actually has flown a true wing. It's only fitting that you show us what you learned from that experience.

Here was a challenge I had to face! With it came the realization that my
entry had to be a version of the N9M I had flown. Anything less would be sacrilegious. That sounded the scramble horn and I was off in pursuit of the necessary information on planforms and airfoil sections. Finally, a three-view drawing of the N9M with all the needed details was uncovered.

With data in hand and loaded with smug confidence, I retired to the work-shop. I shouldn't have been so smug - all my experience gained from never having built and flown a model wing came to the fore. It dictated a flying test bed still reverently referred to by my family as the lead sled.

As work progressed, several modification requirements became apparent. Twin and pusher engines were out because of the complications of timing a maximum 15-sec engine run and the excessive lead requirements for obtaining the proper CG. Directional stability had to be considered, particularly in the glide mode, due to lack of propeller contribution.

The test vehicle came off the building board with a nose-mounted Cox TD 049, TE trim tabs and wing tip fins canted in at 19 degrees. My son, Bob, took one look and sent my ego into a dive with a hearty: That thing won't fly! Enough of this talk, I said, let's find out.

Bob and I left for our own private Edwards AFB, a knoll just right for test-gliding the model wing. After several flights and adjustments to achieve proper trim and balance, we were ready for the real proof. What happens under power?

Being cautious about pitch under power, I had put in six degrees of down-thrust on the engine. We fired up the bomb and set the tick-off timer for a 1-1/2 sec engine run. With Bob safely stowed in the station wagon, I turned that five inches of whirling Cox prop loose, only to have it disappear right over my head! Had I set the engine run at two sec., my ego would not only have been bent - it would have required some bandaids to patch it up. The model had looped over my head and landed right at my heels!

Shaken by those results and the uproarious laughter from the station wagon, I retrieved the model and cranked in more downthrust. Once more, the rou-tine of set the timer, flip the prop, stow Bob, and launch. Then came the exception - on one launch I forgot to trip the timer. The model, launched nose low, proceeded down the slope for a second and then started into what obviously was going to be fatal loop. As the ship came over the top and started down, the loop tightened up and the model was off in a helical climbout at an angle of 45 degrees to the ground - with a full tank of fuel!

Bob bailed out to watch this mad whirling dervish working its way skyward. My only thought was the magni-tude of glide test we were about to observe. Somewhere about 350 ft the engine ran out of fuel..." 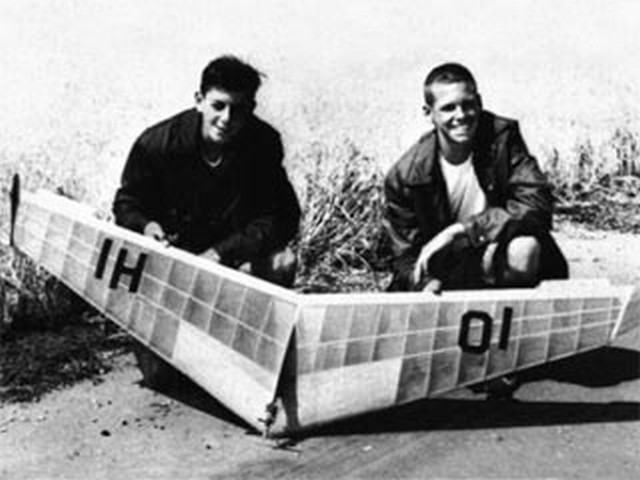 Attached are a couple of photos of a 10 HI I built about 10 years ago [more pics 003-006]. I converted it to 3 channels with a throttle sleeve Cox TD .049 by Milton Dickey. All up weight is 14 ozs. A very gentle flyer. Thanks, from Little Rock, Arkansas.
SteveStaples - 22/01/2017
I just read the article that accompanies this plan, and enjoyed the designer's account of how this model got its name (it helps if you know that 'Ten High' is a brand of American whiskey): "The remaining week was spent in frantic panic completing the model for a trim flight. During that week, my wife, who delivered my favorite spirits and water to the shop, remarked, 'You ought to call that thing 10 High.' 'Why?' I asked. 'Because you've consumed so much of it trying to build that wing', she retorted. An abbreviated version, which came out 10 HI, was adopted from her suggestion."
Mary - 22/01/2017
Add a comment