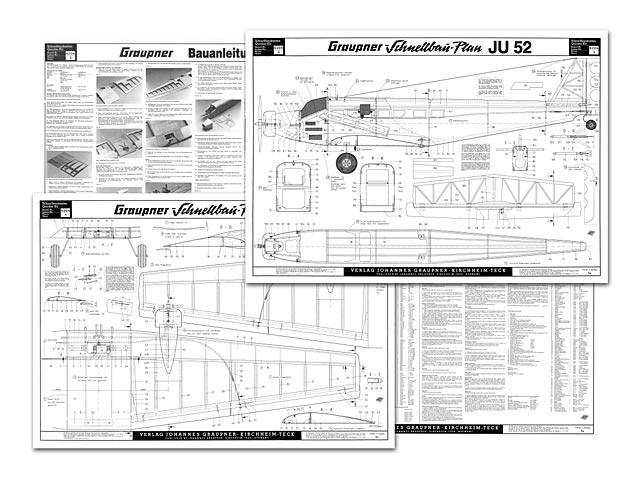 Plan is in total 4 sheets, split into 2 parts, see supplement for part 2.

Hello Steve and Mary, Here is a scan of the original Graupner Junkers 52 plan. Best regards,

Being newly fascinated by the prospect of '400' powered mini scale models, the offer of a kit powered by no less than three of these motors to review, even when coupled with a deadline which would mean a bit of midnight oil burning, was difficult to resist. I didn't resist it!

What do you get for your money? The kit is not cheap but is beautifully executed and very complete. There are masses of die cut Liteply and balsa sheets. The cutting on the ply is just about the best I have ever seen, on the balsa it is not quite so impressive but still perfectly adequate. The uncut 1.5 mm sheet and strip material is of good quality and generally the right grade for the job. The ailerons/flaps (which are underslung completely separate from the wing on this aircraft) are accurately machined to aerofoil section.

There is no covering material in the kit, but there is a large sheet of vinyls giving the markings for the Swiss civil version shown in the box art. Two clear and comprehensive plans plus a photo instruction sheet (in German) and an English translation of this take care of the paper work.

Welcome to weight watchers: As a novice at this electric scale game, I took notice of the several people better qualified than me who had emphasised the importance of 'adding lightness'. The degree to which the Liteply fuselage formers and nacelle motor mounts were carefully fretted away to contain much more fresh
air than plywood indicated that Graupner also thought it important, the design weight being quoted as 1600 grams.

Accordingly, I took time to weigh all the bits before starting to build and including all the electronics and flight battery, they came to 1,510 grams obviously not much leeway there! I decided I was going to have to be careful, especially as I wanted to do a military version which would require painting.

One obvious weight saving measure is to use cyano adhesive wherever possible, but as I have dreadful problems with getting cyano to stick anything, (except my person to the bench, floor or model!), I elected to use my faithful PVA, but applied with a syringe and taking great care to use the smallest possible amount.

This being a kit review, I did not want to indulge in wholesale changes and in any case the basic structural design of the model looked to be pretty well weight optimised and most of the balsa was the grade I would have chosen myself. Accordingly, I settled on the following measures:

Replace my standard Rx with a micro one saving 25 grams (at a price!)

Replace the timber used to build the complete tail unit (I built the one with the kit parts as well for comparison) saving 22 grams. Use only one of the mounting shells for each motor and lighten this one by drilling then lock the motor in place with a nylon cable tie (see photo) saving 10 grams per motor - 30 grams total. Further very careful judicious lightening of the battery cradle and other ply parts by drilling saving 15 grams.

So what about deviations? This is a 'sport-scale' model, but how accurate is it? Well, the general outline and proportions are very good. There are really five immediately obvious deviations; the cowlings are the wrong shape (not surprising as the correct shape has a 'return' which would be difficult to mould in one piece). The undercarriage has only one leg instead of an oleo plus two other struts, the prominent exhaust systems have been missed off and the well known corrugated finish is absent. Most obvious of ail, the thrustline of the wing mounted motors is set up parallel to the centre line instead of with out-thrust (i.e. at right angles to the leading edge) as in the full-size. What you do about these is really down to the individual.

I decided to ignore the first item, and shelve the next two, plus the addition of a dorsal gun position which my military version should have until the model was finished and test flown, as to remedy them would cost, yes, you guessed it, weight. As far as the corrugations were concerned, it would be possible to try some visual 'trickery' but I decided to leave this for the moment. But what to do about the wing mounted motors? Obviously, the set up on the full-size was aimed at making it easier to fly with one wing engine dead. (Incidentally, a second hand report via my soaring friend Alan Cooper, now into full-size flying, indicates that the 'real' one IS very easy to fly and the chap who had flown the South African one said it was just like a big glider!)

On an electric model, the asymmetric problem was not going to arise and I presume the reason for using parallel thrustlines is to minimise drag and avoid power loss. I agonised on this right up to the point of fitting the nacelles and eventually did it as per plan, simply because this IS a review model.

The other choice to be made concerned the flaps. These are shown as non-operational on the plan, but the instructions point out that they can be actuated if desired. I decided that they might well be very useful both for extra lift on take off and as a landing aid and therefore 'invested' the necessary extra 25 grams to make them operable by fitting an extra set of snakes and micro servo in the centre section.

How did it build then? Very well indeed. It is my kind of airframe, a light, rigid, obviously carefully designed structure. The wing construction is very straightforward, with the 1.5mm spruce spar caps integrated with the top and bottom D' box sheeting and full depth spar web pre-slotted for the ribs. Cap strips and a split trailing edge complete a light and satisfying structure. I did disagree with Graupner about the building sequence - they recommend building the fully sheeted centre section and outer panels complete and then assembling them using the dihedral braces and threading the snake outers and motor wiring through. Whilst this is OK, I think it is far easier to get perfectly accurate joints of all the sheeting if you build the panels on to each other, propping up the finished ones as necessary and this is the way I did it.

The fuselage is very easy to assemble thanks to the accurate components and slotted, well matched sides. I did mark centre lines on all the formers and used my fuselage jig to get: it dead straight. The central motor mount is a cantilever construction of Liteply and again it all slots together beautifully. The top turtle deck has three stringers fitted into the pre-slotted formers and is then sheeted in four pieces with 1.5 mm balsa whilst the bottom is also sheeted with 1.5 mm. The wing fixing comprises a double dowel at the front and two nylon bolts at the back. It is important to drill the dowel holes in the fuselage former before sheeting the bottom..." 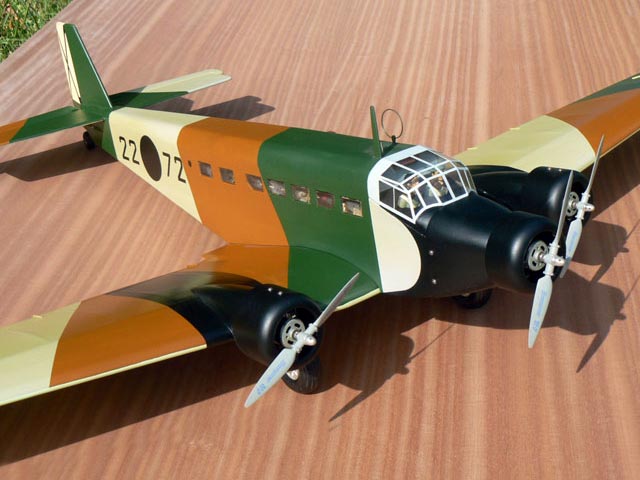 Hi Mary and Steve - My Ju-52 (ID:8333), built from Graupner kit, several years ago [more pics 004-008]. Silkspan covered and decorated with the colours of the Spanish Civil War. Graupner kit motorisation (3 Speed 400 and NiCad battery). Functional flaps. Hitec radio. Saludos from Spain.
JesusAbellan - 17/01/2017
Just because I just saw this model by Graupner: Seems like they are insolvent - again. A few years ago, everyone would have thought this to be absolutely impossible. In Germany Graupner was _THE_ producer of everything model building for many decades and it seemed they were an indestructible tower of strength. Some things aren´t changing for better... :-(
Martin - 21/02/2020
Hi Martin, nothing fundamentally wrong with Graupner, they were my first big-name brand I went to for 20 years starting in the early 70s. With the Eastern competition bulldozing prices down, firms with more expensive cost structures will undergo decreasing sales and all that brings. First it was Japan, Taiwan, Hong Kong a decade or two later followed by South Korea, and then China discovered Capitalism with a bang.
I remember buying a 48" ARF glider from ebay in the early 90s, coming from Hong Kong. The price was dirt, the shipping free, quality excellent. Covering was a coloured clear film so the structure was visible: faultless work, not a single glue excess nor run, and the covering work itself was much better quality than my own, all this for a ridiculous price. The writing was on the wall. The Great Wall, I mean.
Miguel - 21/02/2020
Add a comment