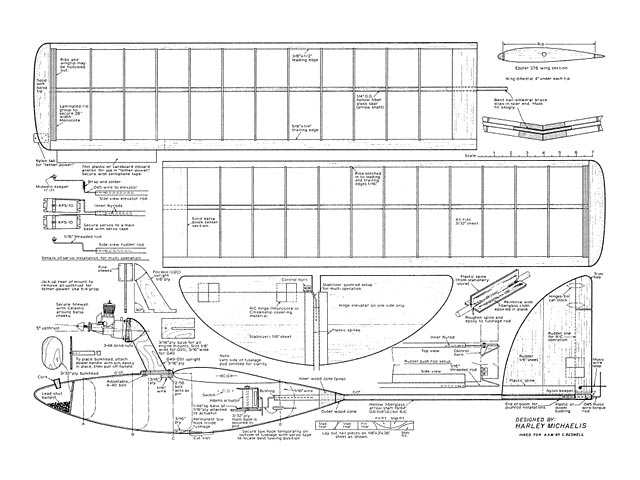 Mod Pod. Versatile club trainer, used as both FF and RC, both glider and power design.

Quote: "This versatile model may be flown in 8 different ways, with or without radio. Designed for durability, repair-ability, and club production as official trainer.

THE 54 in Mod-Pod is a versatile, universal model that introdtkes revolutionary, exciting new concepts! It offers something for everybody, regardless of age or experience level. It is an ideal trainer - tough, stable, forgiving and a great teacher about flight in many forms. It expands and interchanges to fly in eight different ways, three without engine or radio.

It has a look that is love at first sight for most everyone. Trimmed up in either a 'racing' decor with stripes and numbers, or 'daisied up,' it is instantly received by all young 'Mods' as one of their own. One cannot be indifferent to Mod-Pod. Everybody wants to look at it, touch it, hold it, or fly it!

In its basic form, the Mod-Pod is a simple, highly capable soarer, readily run up by towline or hi-start catapult. It also lends itself to an interesting variety of hand games. Two or more flyers can toss it back and forth in a form of playing catch, including variations called 'Around the Barn,' 'Hot Pepper' and 'Boomerang' - to be explained. Or, flyers can compete in distance, duration, racing and spot landing events, for hours of inexpensive pleasure.

With a detachable engine mount, it quickly becomes a sport free-flight with anything from a hot Pee-Wee through the McCoy and Cox 049's and Cox 051 engines. On the Pee-Wee, it is most docile - just right for small fry. On the more powerful engines, it is a real bomb and will quickly become a mere speck unless fuel is limited.

It further expands into RC to become a sport ship or slope or thermal soarer. Its design makes it an ideal rudder-only ship. It quickly accepts the Ace R/C Commander outfits, for simple proportional with a mini-mum of fuss and expense. The pod is roomy enough for all current digital proportional gear and with just two servos for rudder and elevator, the Mod-Pod becomes an exciting performer. On a hot 049, it will climb almost out of sight on a full tank. Without engine, it will tow like a skyrocket on the electric winch. It's built to stand the strain. On the slope, it is a highly maneuverable, groovy little penetrator that will make a fine showing. A true soarer, it has a low sink rate and surprisingly long glide ratio, even with the load of engine and radio.

Tether-Power - A New Ball Game. Mod-Pod introduces Tether-Power, a fascinating, challenging and entirely new mode of flight, involving the use of a spin fishing outfit.

Tether-Power is a sort of combination of control line, free flight and remote control, all at the same time. Here, a beginner can first fly his tethered Mod-Pod in close circular flight (30 to 50 ft radius) and be successful. He will find it easier than U-control, since no control is needed. He just has to hang on! Then, as he gets the feel of the ship, he can raise or lower the rod to do some touch and go's or skim the ground at top speed. As confidence is gained, he can, at will, let line out to enlarge the circle and increase the altitude, to several hundred feet, if he wishes. And, at will, he can reel in line and bring his plane back in.

Circular flight is easy and safe since the Mod-Pod can be trimmed to assure stable flight and minimize the chance for calamity. If tension on the line is released so it can freely slip through the fingers, it will tend to go in a straight line. With practice, the Mod-Pod can be sent straight out 200 to 300 ft at a time on the more powerful engines. It can then be made to gently turn, by gently applying the fingers to the line and returned to a circular path..." 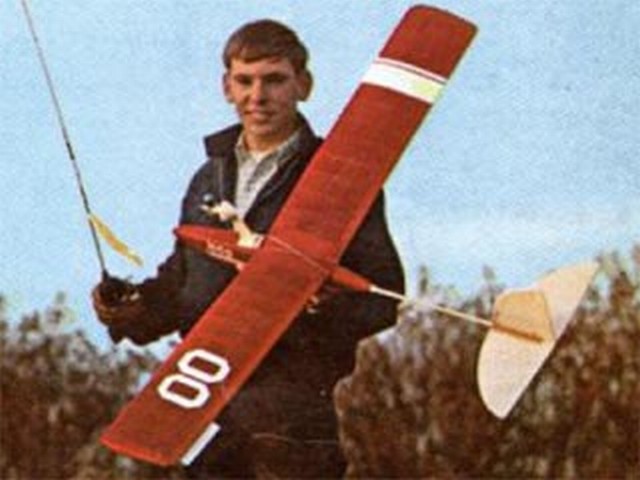