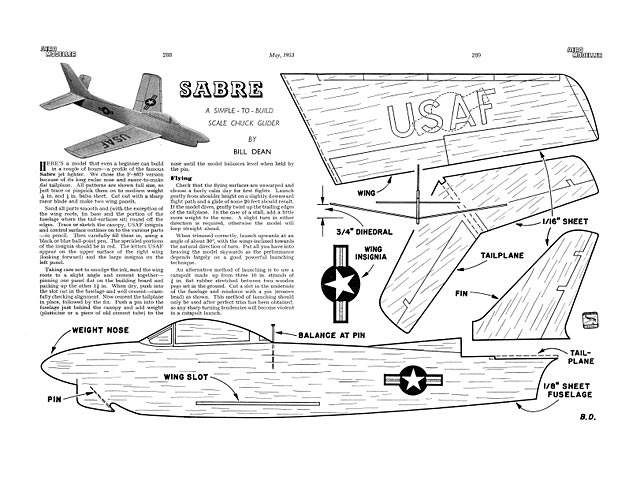 Quote: "HERE'S a model that even a beginner can build in a couple of hours - a profile of the famous Sabre jet fighter. We chose the F-86D version because of its long radar nose and easier-to-make flat tailplane. All patterns are shown full size, so just trace or pinprick them on to medium weight 1/16 and 1/8 balsa sheet. Cut out with a sharp razor blade and make two wing panels.

Sand all parts smooth and (with the exception of the wing roots, fin base and the portion of the fuselage where the tail-surfaces sit) round off the edges. Trace or sketch the canopy, USAF insignia and control surface outlines on to the various parts in pencil. Then carefully fill these in, using a black or blue ballpoint pen. The speckled portions of the insignia should be in red. The letters USAF appear on the upper surface of the right wing (looking forward) and the large insignia on the left panel.

Taking care not to smudge the ink, sand the wing roots to a slight angle and cement together - pinning one panel flat on the building board and packing up the other 1 in. When dry, push into the slot cut in the fuselage and well cement - carefully checking alignment. Now cement the tailplane in place, followed by the fin. Push a pin into the fuselage just behind the canopy and add weight (plasticine or a piece of old cement tube) to the nose until the model balances level when held by the pin.

Flying: Check that the flying surfaces are unwarped and choose a fairly calm day for first flights. Launch gently from shoulder height on a slightly downward flight path and a glide of some 20 feet should result. If the model dives, gently twist up the trailing edges of the tailplane. In the case of a stall, add a little more weight to the nose. A slight turn in either direction is required, otherwise the model will loop straight ahead.

When trimmed correctly, launch upwards at an angle of about 30°, with the wings inclined towards the natural direction of turn. Put all you have into heaving the model skywards as the performance depends largely on a good powerful launching technique.

An alternative method of launching is to use a catapult made up from three 10 in strands of 1 in flat rubber stretched between two wooden pegs set in the ground. Cut a slot in the underside of the fuselage and reinforce with a pin (remove head) as shown. This method of launching should only be used after perfect trim has been obtained, as any sharp turning tendencies will become violent in a catapult launch." 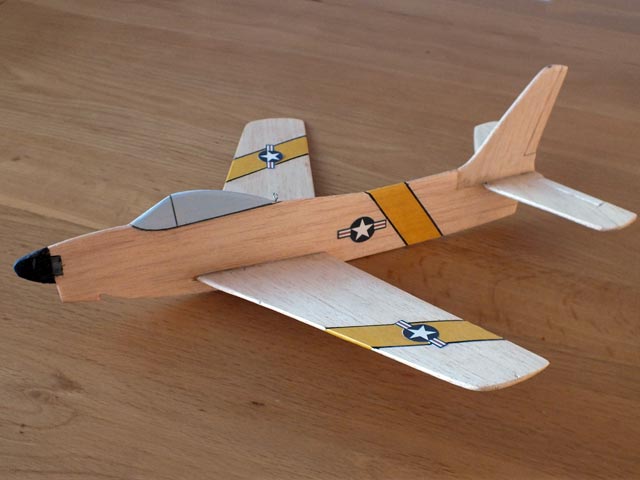