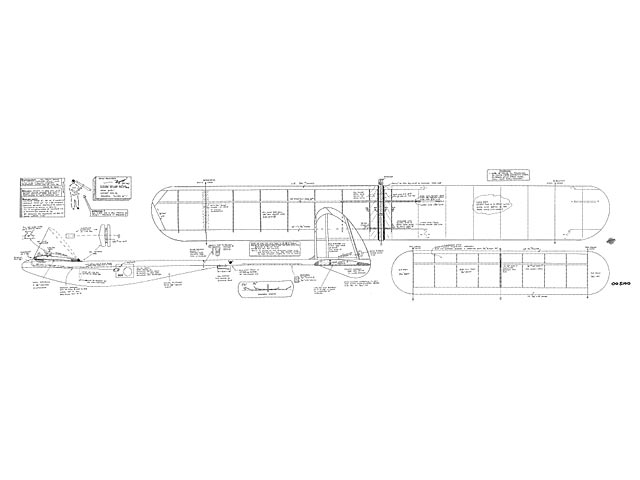 Quote: "A simple SAM 1066 Vintage canard glider from 1949. Span 40-1/2in. Weight 7-1/2oz. Airfoil 'Clark Z'. Construction all balsa except for spruce fuselage spine and some ribs and flying surface platforms, which are of 1mm ply."

Quote: "Last year, on 17 December to be precise, the aviation world celebrated the first centenary of controlled, powered, manned flight - and the Wright Brothers, at Kittihawk, did it with a canard!

Appropriately, therefore, we present 'Egret', a canard glider first flown in 1949, and recently finding a new life in the 21st century, thanks to the SAM vintage model contest programme. In fact, this glider won the SAM 1066 Vintage Unorthodox Glider Competition in 2003.

The fuselage is a length of hard 3/8 balsa strengthened by 3/8 x 1/8 spruce, with a forward keel added from 3/8 balsa sheet. To this keel fit your choice of controls to operate a tip-up (leading edge) foreplane dethermaliser. Dick installed a KSB six miute timer on the port side, upside down, running the D/T line in a narrow plastic tube through the nose to lie over the foreplane leading edge. The KSB on-off switch is connected to the line release via a pivot - this time on the starboard side - so as not to have too much clutter on the port.

You can fit all this another way if you like, but something has to be 'back-to-front' on a Canard! The release itself is the drop-out type much favoured for lightweight gliders. The top fin and underfin are both cemented to the fuselage, allowing the wings to plug in on either side.

The wings and foreplanes each use a flat bottomed aerofoil and construction is very simple. Note that both have flat main sections with dihedral only at the tips. As the foreplane, by definition, bears the brunt of arrivals, it should be built strongly, hence the use of full sheeting underneath.

Covering: Dick used 0.25 mil clear Mylar on the foreplane, 0.5 mil on the wings, then both covered with lightweight tissue, doped/thinned 50/50.

Flight Set-up: This is the most interesting aspect of flying a canard, requiring the optimum setting of incidence, and of the centre of gravity and towhook positions. The CG should be as on the plan and never behind this point. If the CG turns out to be slightly ahead of the point marked, keep the towhook position the same relative to the CG, by moving it forward, preserving the 3 cm dimension, and add as necessary, a touch of extra positive incidence to the 3-1/2° planned for the foreplane. This set-up is recommended to achieve/maintain a slightly undulating glide so that there is no risk in flight of losing the required lift from the foreplane.

With the correct set-up, towing should be good. Once up there, Egret is a floater, presenting a slim profile to your binoculars, so make sure you colour it for visibility!" 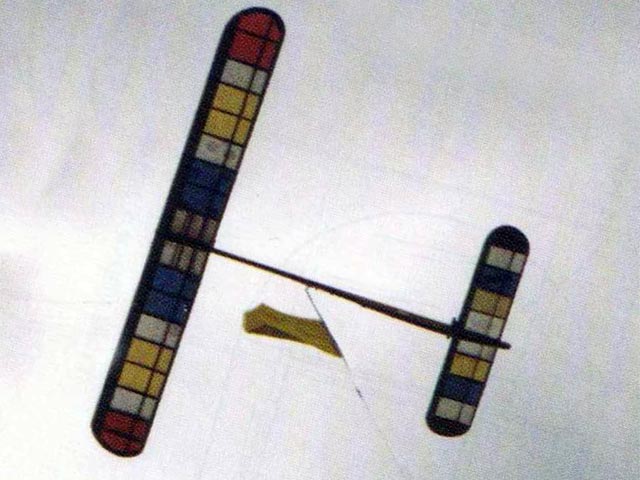