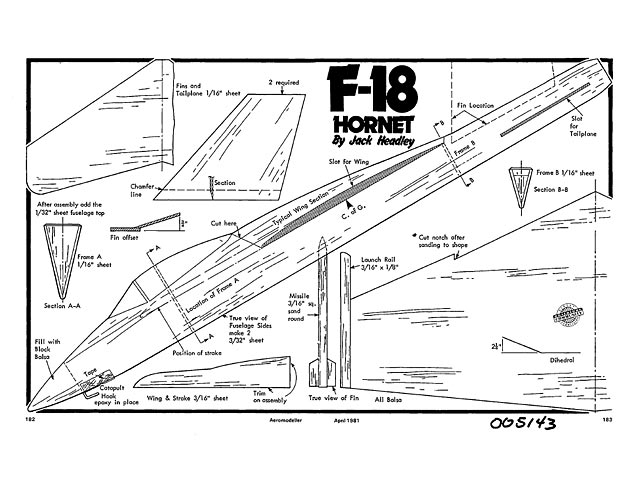 Quote: "ANY NEW AEROPLANE nowadays arrives in a blaze of publicity. Most of this publicity starts with the insertion of the number one rivet in the structure, usually being made by some poor riveter, in a nice new shop coat, and watched over by the managing director and his entourage, trying to look intelligent for the photographers. After this we see the prototype flying, and eventually the aircraft goes into production.

The F-18 Hornet has reached about the half way mark in this story. We have had the prototype development, conversion of the F-17 into the F-18, all the usual stories about the aeroplane being overweight, overcost, unsafe, not required, etc. But now the programme appears to be in full swing, with several prototypes, or pre-production aircraft as they are called now, in flight test. I've seen many plastic kits around for the Hornet, and some R/C versions, both powered and slope soarers, so I thought that it was about time for a chuck glider version.

Hand launched scale gliders seem to have vanished from the modelling scene these days, so why not try one?

CONSTRUCTION: The best approach is to cut out all the pieces first. There should be a little thought given to wood grades before actually applying razor blade to balsa. You'll need two fuselage sides to the shape shown on the plans, and these are cut from medium hard 3/32 sheet balsa. If you throw chuck gliders like I do, they often end up hitting the ground rather hard, (from a vertical dive!) hence the need for tough wood for the sharp end. The fins, (two required), and the tailplane are cut from medium 1/16 sheet, and, initially are sanded around the edges. A medium hard piece of 3/16 sheet is required for the wing and leading edge extensions. The tip missile launch rails are 1/8 x 1/4 hard balsa, and the missiles themselves are made from 3/16 square balsa.

Begin assembly with the basic body. Cut away the area above the wing and the slot for the tailplane first.

The fins are cemented to the fuselage sides while they are separate items, so bevel the inside edges of the fins as per plan, before fitting. The top of the fin is canted out 3/4 in from the vertical, so check the bevel angle before actually cementing the fins in place. The two fuselage halves can now be joined..." 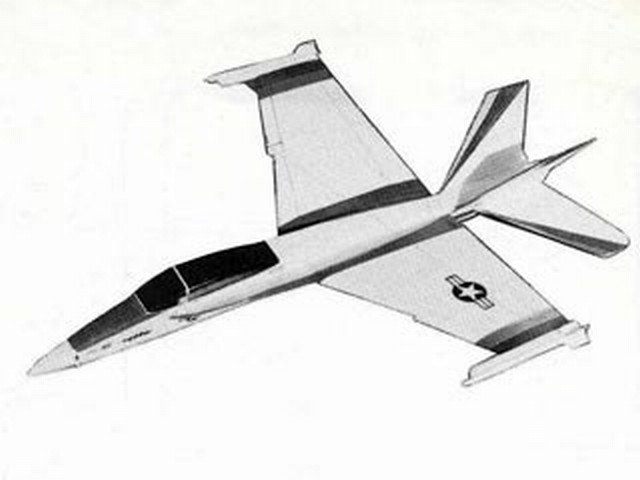