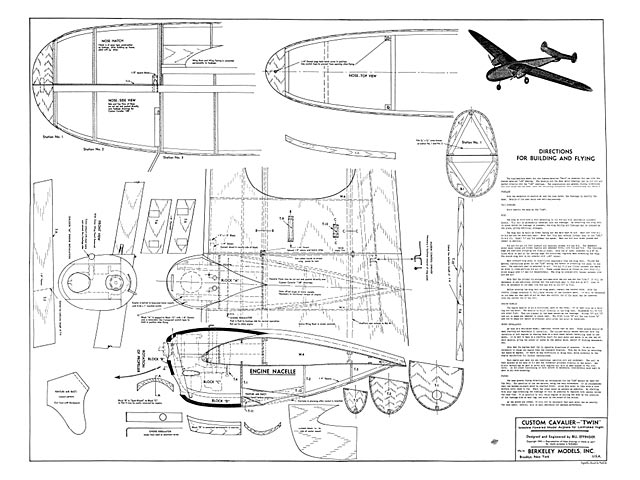 Quote: "This supplementary sheet for the Custom-Cavalier 'Twin' is intended for use with the Custom Cavalier '108' drawing. The nacelle and the nose hatch drawings may be cut out and pasted directly over the '108' drawings. The construction and general flying directions for both ships are the same, with the following exceptions when constructing the 'Twin'..."

Originally designed by Ben Shereshaw in 1935. it was featured in the Berkeley Models advert in Model Airplane News and Flying Aces in 1936. Having a two-wheel braced wooden strut U/C and the inevitable Brown JR petrol engine up front.

A later version, also pre-war (our war, not theirs!) had a modified all wire u/c and slightly different shape fin and with a more positive wing fixing. This design was available in 60, 72 and 108 inch F/F versions until 1943, together with a 108 in span 'Cavalier Custom' for R/C.

In 1943 Bill Effinger had total control of Berkeley Models and produced up-dated versions of some of the popular kits. The Cavalier was one of these and appeared in 1943 as Bill Effinger's 'Custom Cavalier', featuring twin fins and a tricycle U/C. The nose section was slightly deeper for Ohlsson 60 Parker and the wing fixings modified also. The price of this kit was $15. The 'Custom Cavalier Twin' was also advertised at $20, but there is no record of anyone ever owning such a kit. In fact, in a conversation between an American friend and Bill Effinger recently. While seeking information on the 'Twin' for Arthur Fox's model (built from 1943 Berkeley Plans supplied by me) the talk went as follows: 'Cavalier Twin? The guy must be nuts! It's a real dog! In fact only one was ever built and the goddam thing wouldn't fly, even when we launched it off the local airport tower. The single OK! But tell him not to bother with the twin.'

Well! We did bother and you have seen the results of twelve months hard work by Arthur, at Old Warden on August 17th. For once, just once, the British have beaten our colonial cousins across the pond with their own model design!

The Cavaliers were again advertised by Berkeley after WWII up until 1952 and at give-away prices by AHC until 1968. Now what project can I find Arthur for next year? A twin-boom pusher, maybe from Model Craftsman. Never heard of it!" 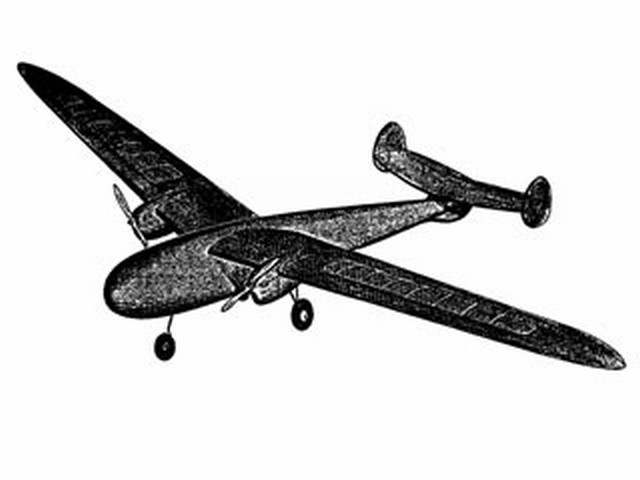