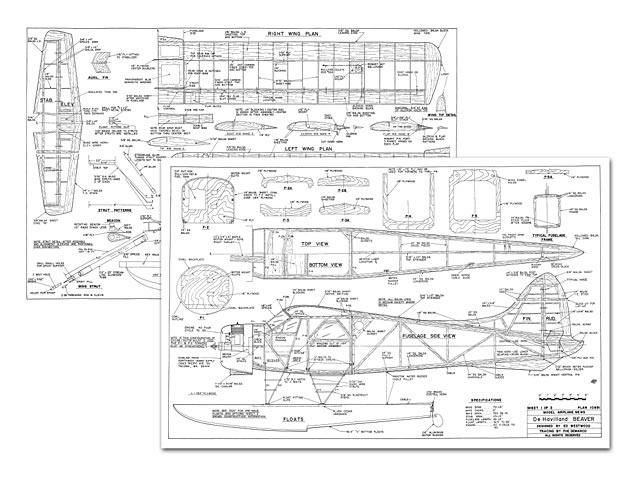 Quote: "THE BEAVER BUG bit me last year while I was photographing float ship for an article on float fittings. After wandering about in a sea of these ships, there it was: big, kind of ugly, narrow, long-wing, fat and stubby guilty on all counts. But if you want to pick a seaplane that's one of the most revered for pure hauling ability and solid flying qualities, this is it.

Unionville Hobbies of Canada kits a 96-inch machine, and Ikon N'West kit another big one here in the States, but where's the small one? Since the Beaver is so popular in full scale, why no .40-size examples? The primary reason is probably the problem of getting the CG far enough forward without adding weight; next come the difficulties involved in designing a film-covered, open frame ship that looks like its full-scale tin brother, and in constructing a torsionally stiff high-aspect-ratio wing with slotted flaps.

Assuming these problems can be overcome, you still have to keep the ship light enough to fly well and still look to scale.

These were the problems that confronted me as I began drawing. Since the external configuration was fixed for me, I just had to put a light, strong, structure inside and a big 4-stroke up front to balance the short nose moment. I knew that if I did need nose weight, putting it in the float tips would minimize the amount needed.

Before I tell you about construction, I'll just touch on my performance goals. This ship is designed to look, fly and sound like its full-scale counterpart. It isn't an acrobatic machine, but with a strong .40 4-stroke, or even a .50 (if you're brave), when it breaks water, you can point it straight up, and only its diminishing size will make you level off.

Of course, for scale-like takeoffs and landings, flaps are mandatory. Dropping the flaps on the turn to final will allow you to point the nose down at a 30-degree angle and spot your landing for maximum scale realism. My side-mounted Saito .50 is admittedly slightly large for this 6.5-pound ship, but I remembered trying to fly off the Pine Hollow reservoir in the hot summer sun with a pooping .40. This year, I was ready, and it was the only place where I really needed full power on takeoff. Back at sea level on cooler days, half throttle is all that's needed. The engine even sounds like the big 450hp Pratt & Whitney chugging by.

CONSTRUCTION: This is straightforward, but I recommend that you read the text while perusing the plans, and pay special attention to the assembly sequence. You'll notice that the scale float struts exit the fuselage sides above the bottom and must be locked into place after the fuselage has been completed and covered..." 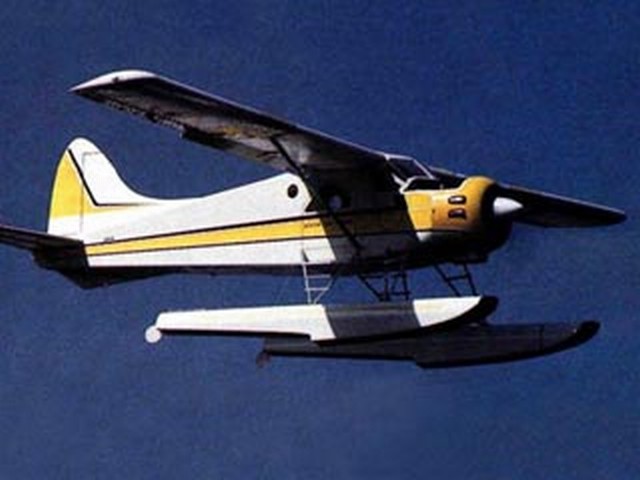 Hi my friends, this my Beaver built from plans by Ed Westwood [more pics 003, 004]. I changed the float for landing gear. Constructed in balsa, plywood, fiberglass, covered with Monokote and colors of Aerotaxi of Colombia in '60s years. It's powered by O.S 61 four stroke and futaba radio 7 channel. It is a beautiful plane and great flying model. Greetings from Colombia. Thank you.
CarlosAB - 12/01/2017
Add a comment