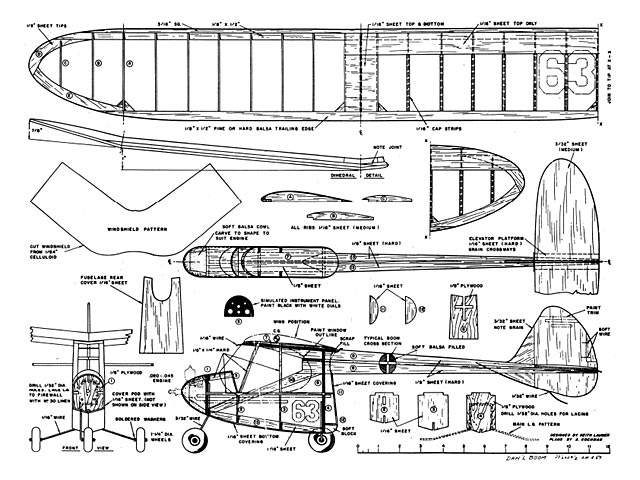 Four small boys watched me crank the engine, lean her out, place the model on the runway headed into a brisk breeze and let go. Dan'l Boom rolled forward, bounced lightly once, and lifted in a steady climb. Humming like a bright green dragon fly, the ship swung out over the field in a wide arc, coming back into the wind a hundred feet downwind. Dan'l bored into the wind, rocking a little in the gusts, and as the model reached a point over head at 100 feet, the engine cut. The ship held steady, drifted off a little to the right, then bucking the air, swung into a left circle. After a fast trip downwind, the model came around and floated in to drop gently onto the runway.

I turned to the small boys, reflecting with satisfaction that they had just witnessed a simple but effective demonstration of elementary aerodynamics, absorbing the feeling of what makes an airplane fly. Hey Mister - one of the boys called - is that a hellercopter?

Dan'l Boom is a simple conventional (non-helicopter) type plane of unconventional appearance, featuring rugged all-balsa construction except for wing covering, and will fly in anything from a dead calm to a half gale with rain squalls. Three or four evenings or a week-end of balsa chopping will produce a ship good for years of reliable performance; so tonight after dinner, start in by cutting out the three 1/8 plywood fuselage bulkheads and the three 1/16 balsa bulkheads.

Next, bend main landing gear from 1/16 piano wire and nose gear from 3/32 piano wire. These are laced to bulkheads 4 and 1 with No. 30 linen thread, coat lacing with cement. Engine mounting holes are drilled in part 1, and nuts glued in place, held down by balsa strip. While cement dries, cover plan with waxed paper; place the two 1/8 x14 hard balsa crutch members on top view, hold with pins. Bulkheads 2, 3 and 4 glue in position; cut keel member 13 from hard 1/16 balsa, cement in place. Allow 15 minutes for glue to set before removing structure from plan and adding members 5 and 6.

Boom assembly should now be laid out by cutting out and assembling 8, 9, and 10 over side view. While assembly is drying, 7, 11 and 12 are cut. When dry, boom assembly is inserted through slot in 6 and glued firmly to both 6 and keel. Boom sides 13 glue in position, care being exercised to align boom exactly as shown on side and top views.

Cut side covering panels to approximate shape, attach to frame. Align straight edge of panels with upper sur-face of crutch. With a sanding block bevel lower edge of side panels to match angle of bottom. Attach half of bottom planking frame, hold with rubber bands until dry. Hole is punched in bottom panel to slip over landing gear. The center edge of this panel should be bev-elled as were side panels to receive remaining bottom panel. (See front view for detail of joint.)

Medium 1/16 balsa cut to approxi-mate shape to cover top forward por-tion of fuselage is soaked in warm water, then held in place on frame with rubber bands until dry. The piece is then removed, trimmed to exact fit and glued in place. Strips of soft balsa cement to boom frame; when dry trim and sand to an oval section. Fuselage rear cover cut from 1/16 balsa is molded over 11 & 12 by moistening in the same manner as fuselage front cover.

Rear end of boom is trimmed; elevator platform cut and cemented in place. A soft balsa block is added against 12 and 6 (see side view) and scrap balsa cemented to fill space between fuselage rear..." 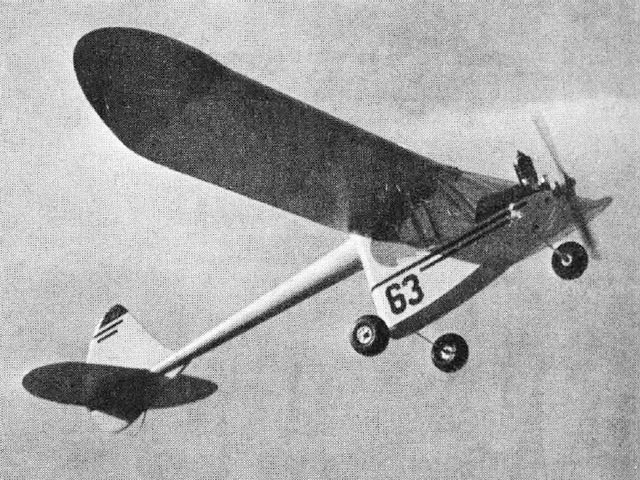