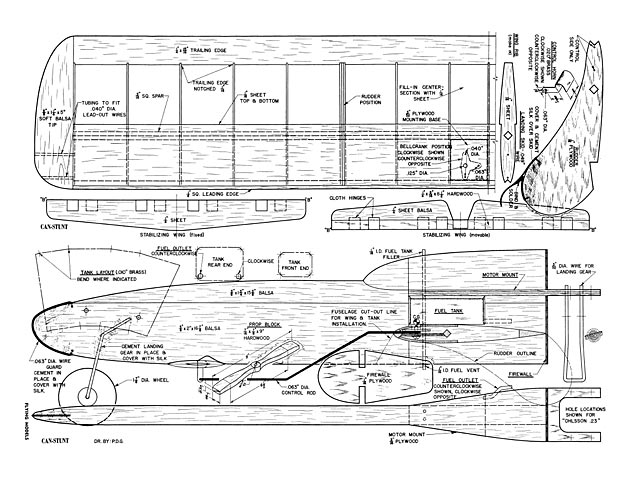 Quote: "For something new and different in control line flying, build this stunting canard model from the full-size plans herewith.

When the editors of Flying Models suggested the idea of a canard U-control model, we had no doubts as to whether it would fly, because of the previous successes experienced with free-flight canard designs. But, we had some misgivings about its maneuverability. This skepticism was based on the fact that the area of the stabilizing wing would have to be small when compared to the surfaces generally employed on a con-ventional stunt model.

The reason for steering clear of a large forward surface was not because we felt it was undesirable, but because it necessitated moving the center of gravity forward, the distance being dependent on the relative size of both wing surfaces and the moment arm between them.

On a free-flight model this would not be such a problem. But, in the case of a U-control model, it meant placing one or both of the control lines forward of the main supporting surface. Not only would this detract from the appearance of the model, but it also would increase the overall drag. In turn this would effect a decrease in performance, which could otherwise be gained by enclosing the control lines within the wing.

As soon as our test model was completed, we hiked out to the local flying field. We had decided that on the first flight we would proceed with extreme caution. Therefore, after the engine was tuned up for flight and the signal for the release given, the model was taxied around for approximately a half lap to feel out the controls. A slight bit of up control was then applied and the model gradually rose into the air.

After several laps of spinning around, we felt the model out with some wingovers.As we had hoped, the ship responded quickly, in spite of the small control area. Since this is a canard, the control surface is lowered when you want the nose up - to get the nose down, you raise the control surface. This is just opposite of what occurs in a conventional control-line model, so make sure you make your line connections at the wing tips accordingly. Reverse your lines so that an up movement of your wrist makes the plane climb, even though the control surface itself is lowered.

One thing that was of interest to everyone who had seen the model fly was the high speed at-tained, sometimes upward of 75 mph. For a small class 'B' profile model, this is quite a lot, indicating that the canard configura-tion can successfully be employed on other types of U-control models. Getting back to the Can-Stunt, we would like to emphasize the fact that you don't have to be a stunt expert to fly it. Proof of this is the fact..." 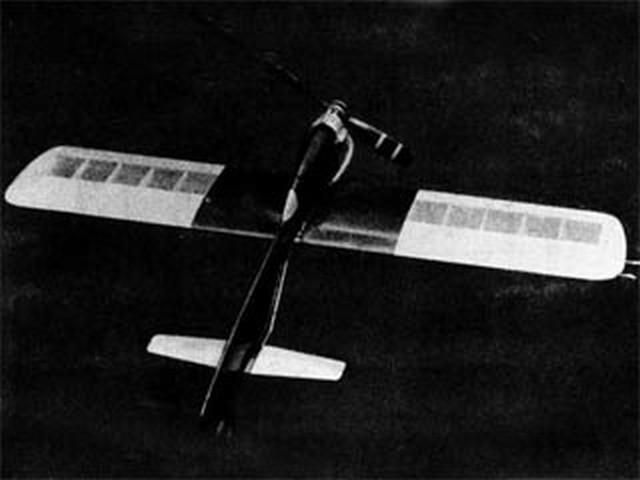