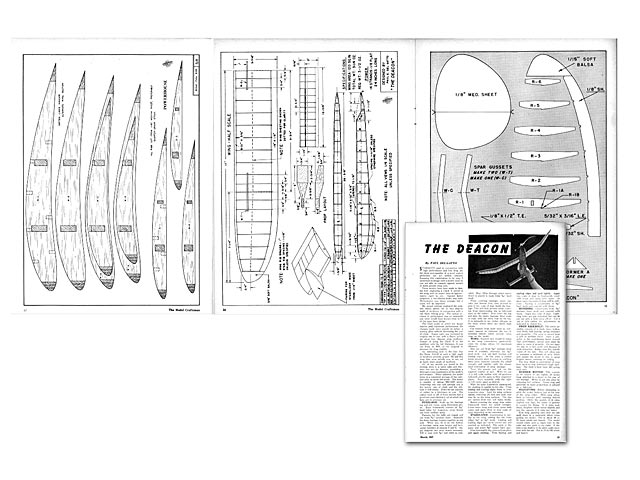 Quote: "STABILITY used in conjunction with high performance and low drag are the three prerequisites of a good contest performer, but are seldom attained. Knowing this combination to be rare, I undertook to design such a model, small in size yet able to compete against models of much greater wing area.

Three models have been made to date, the first employing a Clark Y airfoil in the wing with an aspect ratio of approximately eight to one. Against better judgment, a two-bladed folder was used. Performance was above average, but it could still be improved.

My second attempt employed the original Davis airfoil set at two degrees angle of incidence, in conjunction with a one blade folding prop. The radical increase in performance was so noticeable you never would have known them to be of the same basic design.

The third model in which the design reaches peak maximum performance, the changes made were mainly to induce a soaring glide without decreasing the rate of climb. Aspect ratio was increased to roughly ten to one, with a Davis airfoil set about four degrees wing incidence. Instead of using the Clark Y in the stabilizer with its full thickness, it was cut down to 90% of the original to decrease the drag slightly.

All of my models are tested in the evening when it is fairly calm and thermals few and far between, permitting a thorough cross-examination of the model's performance. When adjusted, the model turns in a consistent average of two minutes plus, on about 600 winds. The motor is capable of taking 900/1000 winds. Something else that will astound you is the terrific rate of climb and the altitude it will obtain. Don't let the scarcity of rubber be a hindrance to you. The rubber used on all of these models had a good four years behind it, all of which had been put to previous use.

FUSELAGE: Scale up the fuselage top and side views, using dimensions given. Basic framework consists of 3/32 hard balsa for longerons, cross braces cut from medium stock.

Formers for the belly are traced and cut from 3/32 medium sheet. Assemble the three fuselage formers together as one unit. When dry, fit it on the bottom of fuselage, using nose former and horizontal members at stations F and G. Apply diagonal and cross braces..."

Note this is not a full size plan, this is a scan of the article and drawings as originally published. Ribs and formers are shown at 100%, of wing and fuse layuout are shown at 50% and 25% of fullsize.

Quote: "Here is that 'Deacon' rubber FF by Paul Del Gatto. It's from 'The Model Craftsman', March 1947. This issue of the magazine also has the earliest(?) version of the Dick Korda Powerhouse which I will get to you as well. Dave" 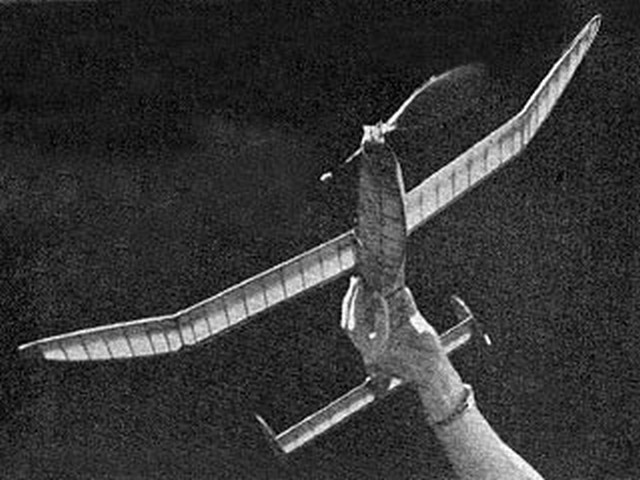 It appears that the ribs supplied (PDF page 1) are for the Korda Powerhouse mentioned in the file description text. The pages shown do not have the ribs for the Deacon (a different page in the magazine?)
Geo - 27/05/2021
Add a comment