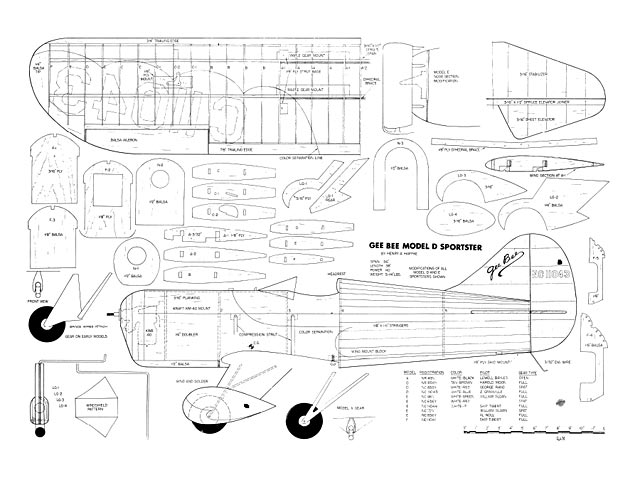 Modifications of all Model D and E Sportsters shown.

Quote: "Here's one of the prettiest airplanes of the Golden Era of racing in scale R/C form. It flies as good as it looks

I built a Model Y Sportster and, after flying it, tried to find information and photos of it usable for documentation for judging in scale competitions. I also drew up plans for the earlier Model D Sportster but put off building it until more photos could be found. I spent the better part of two years searching for material and for the most part, got nowhere. The Smithsonian did have one picture of each of the two Model Y's which were built and the Connecticut Aeronautical Historical Society sent me two good pictures of the first Model Y.

I am a member of the EAA and when my January issue of the EAA's Sport Aviation arrived, it contained a great article on the Gee Bee racers, written by Robert H Granville, one of the five Granville Brothers who had designed and built these craft in the early thirties. I immediately wrote to him telling him of my problems in trying to find suitable pictures to document my model. I enclosed a few pictures of the model and also asked numerous questions about the real Model Y. A week later, I received an answer and this was the start of a continuous series of letters between Mr. Granville and myself in which I learned many new things about the Gee Bees. With the new material I had, I went to work on the Model D which I had drawn the plans for some time ago. I decided to finish the Model D as the aircraft that was frequently flown by Zantford Granville.

Bob informed me that it was blue and cream, though I had seen it referred to as blue and white, and also green and cream in two different publications. I sent Bob color charts to get him to give me the exact colors and he informed me that Randolph Bahama Blue and Tuscon Cream were the correct colors for NC 11043. The model started to take shape...

Following the success of the Model X Sportster in the Cirrus Derby, the company received several requests from sportsman pilots for one of the little single seat sportsters. As the sportsters were built, there were slight differences in them as some were built with the Cirrus engine and some with the Menasco power plant. These inline engine versions were designated Model X, C, and D Sportsters. Some were also built with the Warner radial engine and were known as the Model E Sportsters. The other noticeable difference in the Sportsters was in the landing gear. The original Model X had a non-shock-absorbing landing gear and depended on the balloon tires to absorb landing jolts. A few of the later sportsters had a different gear modification and the later models had the fully faired gear as used on the later Ryan ST aircraft.

Any one of these subjects can be built from my plans arnd included in this article is a chart of all of the sportsters which encompass many color combinations, so there is a wide variety of choices. Also, I show the three types of gear configurations so that any of the Model X, C, D, or E Sportsters can be built from the plans. The front end modification for the radial engined Model E is also detailed. All of the Sportsters were excellent acrobatic craft and were used extensively for air show work. Russell Boardman won the National Acrobatic Championship in one of the Model Y Sportsters. Few realize that the Gee Bee aircraft flew this well.

Pick out your subject and let's get started with the construction..." 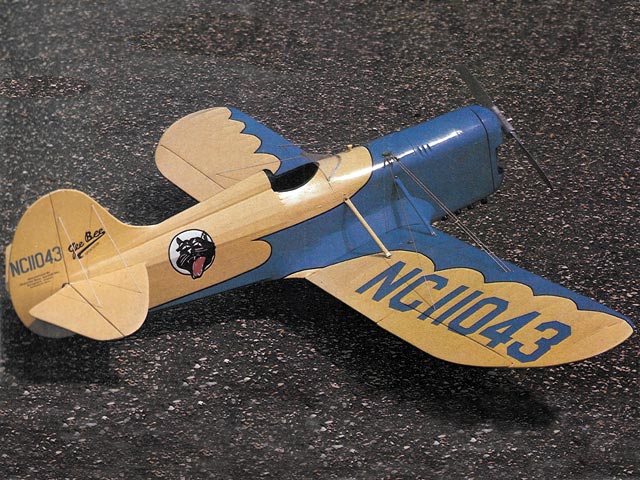 We all owe a huge debt of gratitude to Henry Haffke for bridging the gap in knowledge between the Granvilles and those of us today who hunger for accurate and useful info on this never to be seen again series of historic racers, and, of course, that debt extends to you for the same reasons. Carry on, and thank you.
JimOlson - 29/12/2016
I would like to build this Model D Sportster in scale 1/3 = 100" wingspan. Do you know how to multiply the plan to obtain the right size ? Do you think that wing profile is good for a 100" wingspan ? Thank you so much for your help and your answer,
BernardN - 02/05/2017
To increase the wingspan to 100", I would multiply the plan by 179% when printed. 56" x 179% = 100.24". I don't like the wing construction with the center of the rib spars, too much like some of the Carl Goldberg models that ended up with folded wings. If you use two spars, top and bottom of the rib to replace the existing spars, front and rear, with shear webs between, it will be much stronger. A sheeted leading and trailing edge with capstrips on top of the ribs will make a nice, smooth wing. Go for it.
DougSmith - 02/05/2017
Add a comment