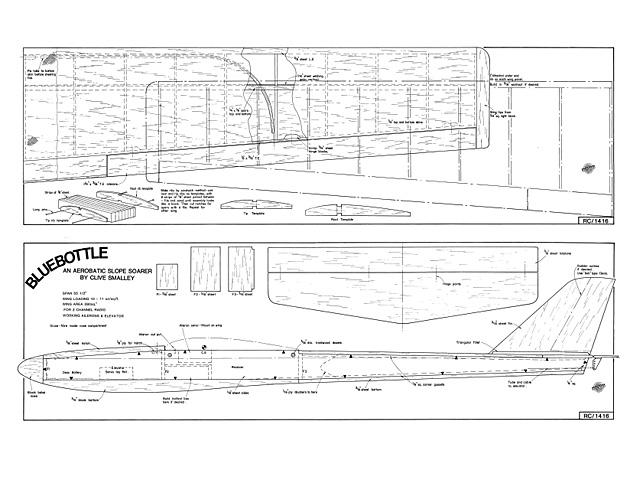 Introduction: LET ME COMMENCE this article by first stating that this design was not originally intended to be a full aerobatic 'kipper.' The main design aim was to produce a two funtion first aileron model as a follow-up to my previously published Orange Box (oz7292) design. One design parameter was the need for good maneoverability, to stay within the narrow areas of lift on my local slopes. In practice this has been achieved with the prototype, with an added bonus, for experienced pilots; there being sufficient room within the fuselage for a third servo operating the rudder. However, the model performs well on just aileron and elevator.

To further increase the versatility of the model, provision for a ballast box near the centre of gravity has been included on the plan, although this was not fitted to the prototype. This enables the model to be flown in a greater variety of wind conditions. Without ballast the wing loading is relatively light for a slope soarer at around 11 oz /sq ft, giving a good performance in lightish wind conditions, providing the airspeed is kept high.

The somewhat unconventional cross-section of the fuselage, was adopted to allow the aileron servo to be mounted on the underside of the wing, without the need to cut away the wing bottom skin, apart from a small slot for the servo connection. It has been designed to accommodate the older larger servos such as the original Futaba type. As the aileron servo lay flat within the fuselage, it was logical to similarly lay the elevator servo flat, giving rise to the phrase: first of the wide bodied slope soarers!

Construction: The construction of the model has been kept as simple as possible for fast building, combined with strength and lightness. Although not as economical to build as an open structure. the all sheet wing gives greater torsional stiffness which is useful when ailerons are used. To speed assembly, the box wing is built over the bottom skin.

Mark out and join 1/16 sheet for both bottom skins to dead outline size. Mark on all the rib and spar positions. Cut out two sets of ribs by the sandwich method. Pin down a bottom skin and glue on the lower spar..... 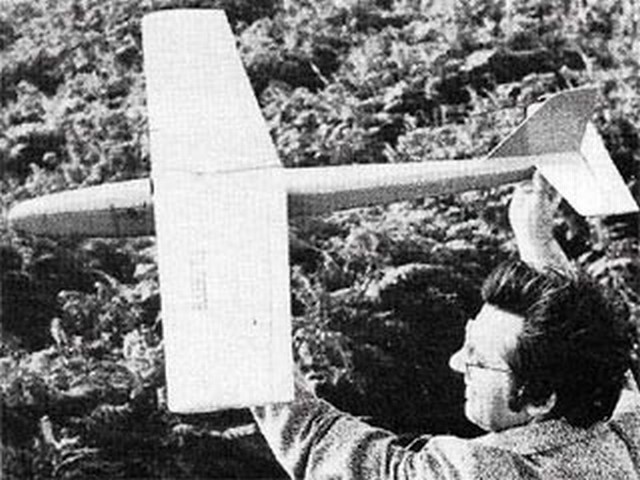