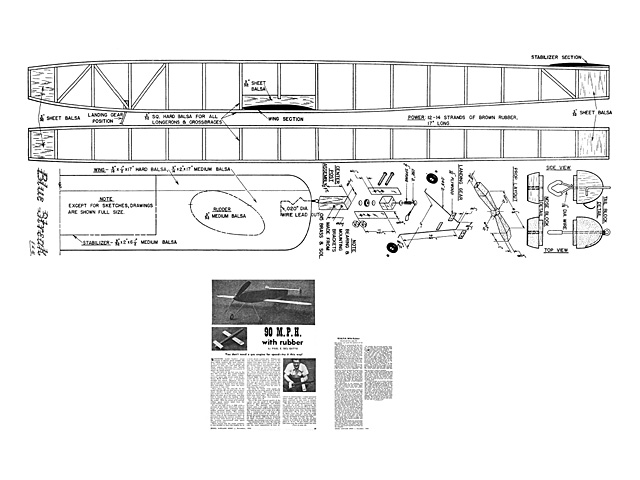 Quote: "90 mph with rubber. You don't need a gas engine for speed - try it this way! Blue Streak, by Paul Del Gatto.

WHENEVER model builders group around to discuss speed models, the item which receives the most attention is the powerplant. With gas engines as popular as they are, and with jet and diesel engines following close behind, rubber is seldom discussed as a source of power for speed models.

Yet, just prior to the last war, in the late 30's and early 40's, model builders were constructing and flying rubber-powered speed jobs which could do between 80 and 90 mph over a prescribed straight line course. However, this re-quired a great deal of skill both in adjust-ing as well as in design. since the models flew free-flight. There were too many problems to cope with.

It was not until early in 1946 while a member of the Bronx Aero Club, that we heard of other clubs conducting indoor rubber powered speed model contests during the winter months. This sounded like a good way to pass an evening and to revive some of the competitive spirit so prevalent during the summer months. A set of rules were drawn up to eliminate the troubles encountered with speed models of the past.

Since torque was the major problem, it was decided to have the models fly in a circle about a center post. Fifteen feet was the selected radius, in view of the limited floor space since the planes were rubber-powered, it was necessary to begin timing almost immediately. Therefore, we decided to allow the model one half lap to take-off and accelerate. The model was then clocked for one complete lap. Three official flights were to be allowed each contestant, with three delayed flights accounting for one official flight, a delayed flight being one in which the model did not take-off in the first half lap or did not complete one full lap before any part of the model touched the ground. The highest speed recorded by each contestant would then be used to determine the winner.

To John E Gluth went credit for achieving the top place speed of 76 mph at the first contest. The model was very simple in design, being constructed entirely from sheet balsa. The landing gear was a two wheel affair, thus insuring a rapid, steady take-off.

One of the most unusual models of the contest was the result of the combined efforts of John Thompson and Robert Syvanen. The fuselage was diamond shaped, with a low aspect ratio elliptical wing and stabilizer made from sheet balsa. The landing gear was a single strut affair with a streamlined piece of lead at the bottom which balanced the model. Although the model appeared capable of doing 85-90 mph, difficulty in trimming for flight eventually resulted in heavy damages, thus forcing it out of the contest.

The simplicity of the rules, the ease and rapidity with which a contest could be run, the small expenditure of time involved in constructing a rubber-powered speed model, and the small amount of space required to run such a contest, make this event ideal for a club contest.

The Blue Streak presented here is ideal for such an event. It represents the culmination of an all-out effort to obtain a high degree of streamlining while main-taining simple lines, thus insuring rapid construction. So, if you've got an hour to spare every day for just one week, you can build yourself a model that will pay big dividends in thrills and chills.

Since the plans are full size, all that remains to be done is to join the fuselage plans at 'A-A'. If you prefer, you can just trace over the outline..." 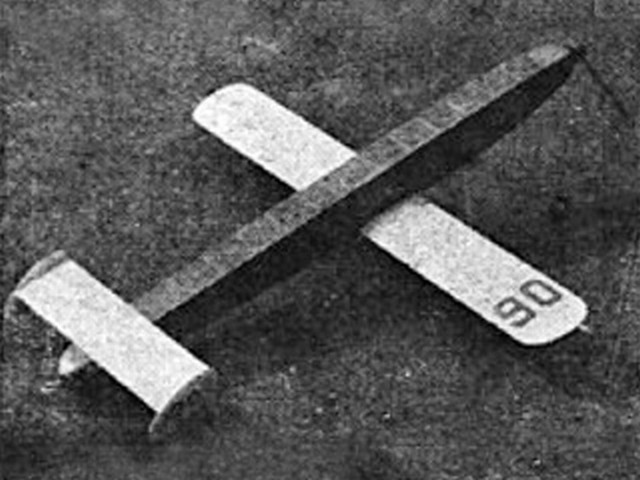