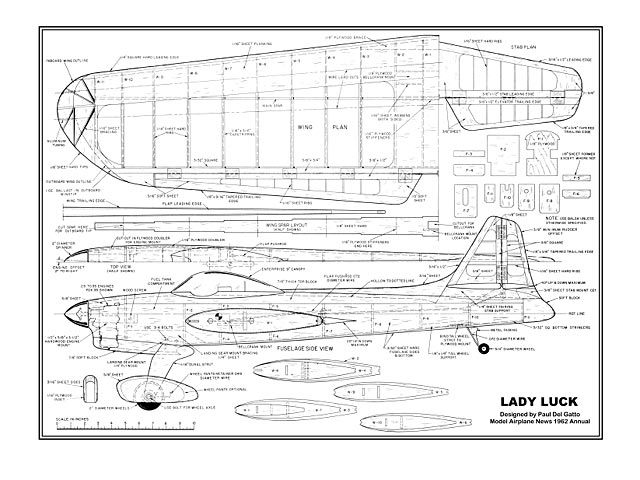 Quote: "Like many an ardent control-line enthusiast we sometimes get bitten by the bug to do something just a little more than slapping a profile model together for some Sunday flying fun and get the urge to go off on the deep end. The Lady Luck, shown here, is the long drawn-out result of two years of development in airfoils; structural design and proportional development.

Outwardly, the model's appearance is not unlike many other stunt models, except perhaps for the high-slung tail surfaces. The airfoil is an NACA development which heretofore we have not seen used, though that in itself is not the whole measure of the model's success. The wing construction departs from the traditional top and bottom main spar with sheet and capstripping, instead, a stepped sheet spar is used. The fuselage is constructed similarly to many other stunt models, except perhaps it's a little beefier than some. To some extent these structural and design considerations were essential, for in the art of stunt flying we do not rank ourselves as a better than an average stunt flier.

The skilled stunt flier can take most any model, even a poorly designed one, and with little effort do the complete pattern as if it were 'duck soup'. Not so with us. What we needed was an airplane as close to perfection both structurally and aerodynamically so as to make up for our lack of top flying skill ...Despite the quantity of lumber absorbed in building the Lady Luck, the weight was kept to a respectable limit, by using a great deal of medium to soft wood and using hard balsa only where absolutely necessary.

Properly controlled, this method of construction has the decided advantage of obtaining a model that will better absorb the stresses and strains of maneuvering as well as, engine vibration, not to mention those rough takeoffs and landings which can happen to the best of us..." 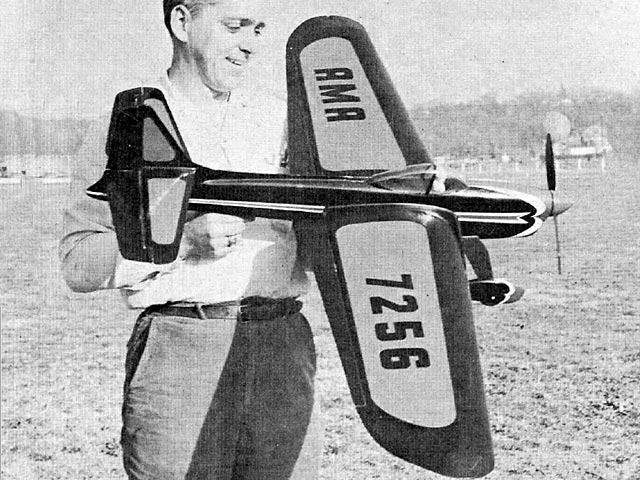