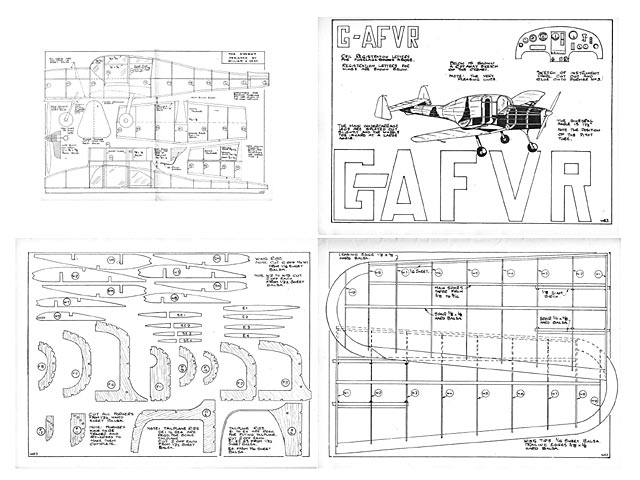 Quote: "An 'up-to-the-minute' model that should appeal to all. Those of our readers who hare criticised the absence of drawings in which all details are full-sized will find their requirements fully met this month.

IN the 'Cygnet', General Aircraft Ltd have produced a machine that combines good flying qualities with maximum safely and comfort. The original design had a single fin and a conventional undercarriage. The present nose wheel underearriage has simplified both take of and landing problems. In fact, it is the boast of the makers that the Cygnet lands perfectly with hands and feet off. Take-off and taxiing have been made easy by means of the novel undecart, insomuch that the Cygnet is very easy to handle on the ground, there being no sign of swing as with most aircraft. Even taking off cross wind is quite simple, whilst perfect visibility is afforded, as the cowling lies flat and well below eye level.

Construction is all metal, the wings and tailplane being stressed skin, whilst the rear oval part of the fuselage is monocoqued. Power is either a Cirrus Major 150 hp or a Gipsy Major 130 hp engine. The interior of the Cygnet is not unlike that of a car, allowing plenty of leg room and ample luggage space behind the side-by-side seats. All the switches are within easy reach from either seat, although the pilot usually sits on the left.

The maximum speed is 135 mph, whilst the cruising speed on 70 per cent power is 115 mph. Instead of a landing speed the Cygnet has a 'landing range' that is a coloured sector marked on the air-speed indicator. All the pilot has to do is to keep the needle of the air-speed indicator within this sector. This is very simple, as the safe area is between 60 and 80 mph.

The range is 445 miles on 27 gallons of petrol. When fully loaded the weight is 2,200 lb, and when empty 1,475 lb. Service ceiling is 14,000 ft with either engine. All the other performance figures are with the Cirrus Major, those with the Gipsy Major being slightly lower except for the range, which is 460 miles.

Considerable numbers of Cygnets have already been exported to Australia, India, Brazil, America, and other countries which still enjoy civil flying.

The author's main reason for choosing the Cygnet was that it presented some really interesting features, as well its making a good flying model. The scale of 3/4 in to the foot makes quite a large-sized plane of 25-7/8 in. This scale proved almost too large for the Aeromodeller's pages. As the reader will see, the plans have cut through the border at several points.

A glance at the plan will make clear the advantages of this plane as a flying model, ample dihedral and the twin tails both going to make it unusually stable. Before commencing the model the plans should be traced. 'A' 'A' and 'B' 'B' being joined together. In order to save time only the ribs and bulkheads need be traced, waxed paper being placed over the plan to protect it.

Begin by cutting out all the ribs and bulkheads from medium balsa. Only the four try 1/16 in by 1/8 in slots are cut in the formers, the remainder being lightly marked in pencil. The four main stringers can now be cut out from 1/16 sheet, the portion between Fa and F5 being included. Next add the remainder of the stringers..." 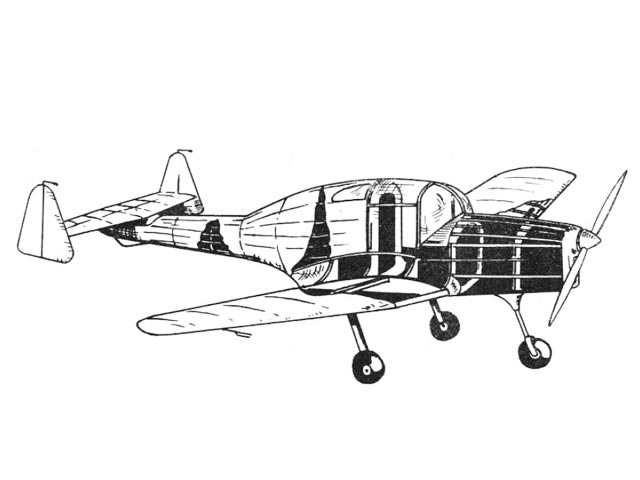